With the 2004 presidential election come and gone, many citizens will tune out the various debates that our lawmakers continue to engage in.  Both sides will retire to their blue and red corners of this polarized nation with a sigh of relief, the red for their victory, the blue for their participation in the democratic process.  The red will declare that moral values of the voters will continue to hold this country together, while the blue argues this very subject tears this land apart.  Both sides are blinded by the hypocrisy of their own parties as they view their prospective leaders as figures of deity.

In retrospect of last month's elections, voters returned President Bush to the White House due to his moral agenda.  Depending on the media outlet, the win came through miniscule proportions or a cataclysmic majority.  At any rate, President Bush will unveil his outline for the upcoming years and this author is skeptical that those same moral issues the won him the white house will be anywhere near his agenda.  Why is this?  Americans, as a whole, skate the lines of morality.  When America went home for Thanksgiving, Desperate Housewives was the highest rated show (27.2 million viewers).  In the back corners of society, pornography is the most lucrative media industry in the country.  Divorce rate is an astounding 50%, and is it even possible to track infidelity numbers?

Look at morality amongst our leaders.  Bill Clinton tarnished every positive decision made in office by succumbing to moral temptation.  Mayor Giuliani will forever be remembered as a hero of 9/11, but his infidelity decisions will forever be on his constituents mind,   What about the New Jersey governor who had an extra-marital affair with another man?  Two of the largest media personalities, Rush Limbaugh and Bill O'Reilly, have also taken heat for their moral choices.  And the list goes on…

Some thoughts on the issues:

Abortion is one topic which stirs strong confrontation between both parties.  Republicans look at the argument as right vs. wrong, as Democrats view it as a challenge of government-protected rights.  Republicans argue that abortion destroys life while Democrats believe that government-regulated abortion destroys civil liberties.   Now Republicans would like to believe that Democrats support this malice practice, while Democrats cry that Republicans are undermining the constitution.  The most interesting part of these perspectives is that both sides believe their opponent is closer to the extreme.  For instance, a small percentage of Democrats actually support this inhumane practice, while the majority believes this is an issue of government influence.  This is why they are labeled pro-choice instead of pro-abortion.  Looking from the other side, Democrats try to label Republicans as a majority who want to challenge constitutional rights, when in reality they believe that abortion is an immoral act.  Both parties use extreme stances to justify why the opposing party is out of the mainstream, when in reality, their implications only identify small percentages.

Perhaps this is where the hypocrisy sets in:

If one was to ask a pro-choice Democrat why they follow such a belief, their response would be to the tune of protecting civil liberties.  Ask that same Democrat concerning civil liberties of the embryo, and their response is strained.  They will protest time and time again regarding the woman's right, but do not spend an ounce of effort regarding the unborn's rights.

Ask a Republican why they oppose abortion and their response will most likely depict a graphic reconstruction of the inhuman procedure.  They also will counter with discussions of morals and ethics regarding the unborn.  Ask that same Republican if the government should take responsibility of uninsured toddlers, abused infants, or homeless children and their response will be less then adequate.  Republicans will fight tooth and nail to outlaw abortion, but when that child comes into the world, responsibility is waived.

The same hypocrisy can be witnessed in homosexual rights.  The Democratic left desires to legalize civil unions or gay marriage.  The same individuals will also point to the destruction of the family as one of the challenges of moral America.  However, they fail to recognize the connection between the two.  The conservative right is equal in their belief that the family unit is being challenged.  However, with their fight to deny the rights of marriage to gay couples in full swing, the real destroyer of family is left to expand.  Moderate Republicans (the staunch conservatives refuse to tamper with the constitution) seek to outlaw such a union by amending the constitution, yet they do not fight with the same vigor regarding adultery.  Who can argue that infidelity is a far greater threat to moral America then gay marriage?  Why not petition with the same tenacity toward an amendment outlawing adultery?  Seems ridiculous, right?  Possibly.  But the point could be made.

One of the more fascinating platforms which divides the two parties, can actually be viewed as a contradiction to both.  Gun control: government regulation or absence?  In following the basic stances on abortion, gay marriage, and personal platforms regarding less government, it is surprising that Democrats are more prone to support gun control.  Republicans on the other hand, who so adamantly support government intervention in personal platforms, cry foul when legislation approaches their perception of the second amendment.  Democrats might argue that firearms infringe on the constitution's guarantee for life, liberty, and happiness.  They also might justify the limiting of arms as a necessary enactment for protecting personal rights.  After all, anyone assaulted with a firearm loses their personal liberties.  However, it appears contradictory as to when government intervention is appropriate.

Firearms also present a moral dilemma to the conservative right.  This past year the assault weapons ban, supported by 70% of Americans and a large percentage of NRA members, expired with little action from the Republican House or the President.  On the eve of the expiration over 5,000 police officers from around the country traveled to capital hill to protest the lack of effort from lawmakers.  The ban was also backed by every major police organization across the United States, but to no avail.  With the power of the NRA lobbyist controlling a major resource, the expiration of the ban brought twenty million dollars of campaign money to various Republican races across the country.  The Republican Right refuses to understand moderation in this particular example.

According to the definition, "moral" relates to principles of right and wrong in behavior.  As we look though this country with partisan eyes we selectively engage in our own "moral" battles.  For the Republican side, the battle revolves around the black and white disregarding the more challenging problems.  The Democrats are the exact opposite, focussing on the complex and graying the black and white.  Social programs are perfect examples of these accusations.  Throughout the 2004 campaign John Kerry spent incredible resources addressing the lack of medical attention in this country for children.  Even with good intentions Kerry could not communicate specific details in accomplishing his proposals, or his suggestions seemed fiscally irresponsible.  The majority agrees that taking care of the poor is America's moral responsibility, but Kerry's solutions are too complex or expensive, which in turn makes them unreasonable.  President Bush, on the other hand, also solidified these accusations by refusing to even present a solution.

What is more interesting about Medicaid and poverty issues is the divide that comes with stated political philosophies.  The blue states are labeled as big government and excess spenders of America's tax money.  The Republican base also believes that the Democrat's practice of handouts to the poor hinders the motivation of the impoverish.  The Democratic base describes the Republican's small government as self-serving.  The irony of these two statements is apparent after studying the 2002 census reports.  The states with the highest percentage of citizens without healthcare are New Mexico, Texas, Alaska, Oklahoma, and Louisiana; all red states.  The states with the lowest are New Hampshire, Wisconsin, Pennsylvania, Connecticut, and Iowa; all blue.  The states with the highest poverty percentages are Mississippi, Louisiana, New Mexico, West Virginia, and Alabama; all red.  The lowest are New Hampshire, Minnesota, Connecticut, Maryland, and New Jersey; all blue.  Even more interesting, in averaging 10 surveys (see attached) ranging from education, to teenage pregnancies, to crime rates, to federal aid per capita, the top five states are Connecticut, New Hampshire, Minnesota, Vermont, and Wisconsin; all blue.  The bottom of these averages are Mississippi, Louisiana, New Mexico, Arkansas, and Oklahoma; all red.

What this data implies is the two divides are not catering to their particular needs.  It can be assumed (given California and New York alone) that the blue states generate the largest percentage of the federal income tax receipts, with the least per capita need of federal aid.  With the difference between the two parties being the theoretical size of government, it is amazing the positioning of the blue and red states.  Red states vote for candidates who support smaller government, and blue states vote just the opposite, defying the best economic interests of both.

Throughout this election the war on terror overshadowed the ongoing debate concerning the reform of socialistic programs.  Yet the social programs we refuse to address, most directly affect the soldiers keeping our country safe.  It is no secret that the largest percentage of military personnel originates from America's poorest communities.  Recruiters refuse to enter upscale neighborhoods as such trips would prove unsuccessful.  Ask a lawmaker if they have ever been directly affected by welfare or Medicaid and a story might be generated concerning a distant relative.  Ask that same representative how many family members or neighbors they know in IRAQ and a distant corner house might be referenced.  These policymakers maintain the same moral responsibility to the hidden parts of the United States, and citizens need to push accountability.

As this country tries to tear down the polarizing wall generated through partisan politics, we need to understand that each side has not escaped moral challenges.  America will not progress as a divided nation anchored by two extremes.  Citizens and lawmakers need to unify and work though social and personal perspectives, and strive for the common good of man, not the slim majority. 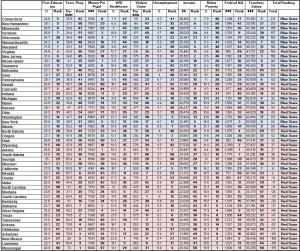 Perhaps one of my passions (and an intragal part of politics and policy making) is economics. This paper was written three months before the 2004 election.

(First two paragraphs of the article)

Perhaps one of the most partisan debates today is the economics of monetary and fiscal policy. Many administrations in the past have implemented their own beliefs in regards to this subject. In studying various administrations of both parties, I have come to various conclusions: