After All That We Can Do

I realized the predicament the Republican Party was in when I got into a heated conversation with a close relative.  I had just read James McPherson’s Pulitzer-winning book Battle Cry of Freedom and was curious to find out what side a close relative sided with.

"How can you not side with Lincoln?" pointing out Lincoln's accomplishments.  “Would you rather have our great nation divided into fifty countries?”

To my astonishment my question was met with a resounding, “Yes!”

I was then treated to a half hour lecture on the original intent of the American Constitution , state rights, and why I should read my history, listen to Glen Beck, Rush Limbaugh, and find out how the national media is tricking our citizens. I shook my head in disbelief. I didn’t know what else to say besides , "Dude, who stole the Party of Lincoln and turned you into a neo-Confederate?"

To answer the question, it’s a combination of many things—talk radio personalities, regional politics, and a philosophy that comes straight out of antebellum America. There are many examples of “Lost Cause” philosophy even in the Mormon community. For the most part, we should recognize that most people in the South and most members of the Church (even those who prescribe to the other party) are good people. However, the fact that leaders within the Republican Party have played to the raw emotions of Southern white men cannot be ignored. Since Nixon, the "Southern Strategy" has been a deliberate ploy that has effectively divided the country.  Credit should be given to Romney who tweeted the tweet that started the conversation among Republicans to take down the Confederate flag after the murder of Clementa C. Pinckney and eight parishioners at the Emanuel AME Church. Perhaps Romney recognizes that if the Republican Party is to survive, it must crawl away from toxic regional politics.

As Mormons we aren’t immune from the vestiges of the Civil War.  Systemic racism is just as much a part of Mormon history as it is American history. We find it in statements from our leaders and much to the surprise of many millennials the temple and priesthood ban continued until 1978. It’s ignorant to believe that racism disappears overnight, because it doesn't. Yes, we are guilty of racism even in many wards and branches. It’s time to realize that many members are guilty of carrying the Confederate flag in their hearts, if not on their front doorstep. For many, it’s time to take down the Confederate flag—to rip it out of our hearts and place it in a museum of yesterday. Or, as my Sunday school teacher said, “It’s time to repent.”

We see shades of hope and though we know we have a long way to go, perhaps we must recognize that the Church might be the unexpected place where we can have what Ken Burns called, “The courageous conversation.”  We also must recognize the leaders who have shown courage for standing against those who promote racism. 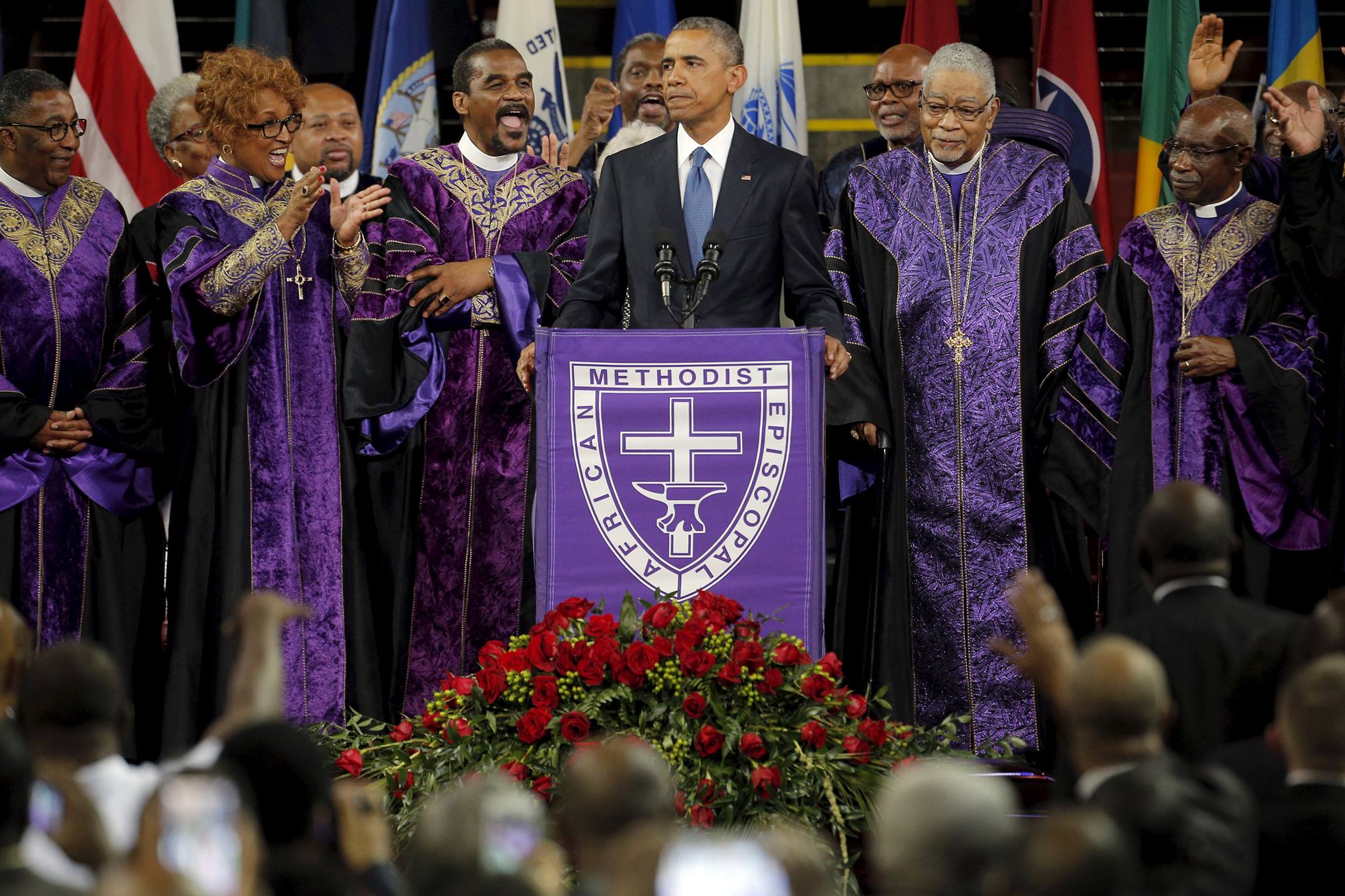 For us Americans, a new course has been set at the eulogy for Reverend Pinckney. I have pondered and studied the brilliant words.  I recognize the themes, the American history, and the great religious poetry spoken. This speech will enter into the diction of American literature and it will be up to this generation to marvel at the moment and pursue the goals to create more equality, eliminate American poverty, and to give the opportunity of education for all people.

Obama stated, “As a nation, out of this terrible tragedy, God has visited grace upon us, for he has allowed us to see where we've been blind. He has given us the chance, where we've been lost, to find our best selves. We may not have earned it, this grace, with our rancor and complacency, and short-sightedness and fear of each other -- but we got it all the same. He gave it to us anyway. He's once more given us grace. But it is up to us now to make the most of it, to receive it with gratitude, and to prove ourselves worthy of this gift.”

My Mormon mind ponders the meaning of grace and I can’t help but to think of 2nd Nephi: 25:23: 23, where it states, “For we labor diligently to write, to persuade our children, and also our brethren, to believe in Christ, and to be reconciled to God; for we know that it is by grace that we are saved, after all we can do.”

For Mormons faith is a verb. God has done all that He can do through grace, and now it’s up to us to do all that we can do.  Taking down the flag requires action, but even more importantly changing the way our country, state, and church addresses poverty, racial injustice, and the vestiges of America’s original sin of slavery will take work. It’s a work we Mormons should be willing to roll up our sleeves and do. How do we as Americans solve the issues from our past? Something inside of me tells me that if anyone can figure it out, it will be us Mormons.