In Saturday's Washington Post, Hunter Schwarz commented that Mormons, the most Republican religious group in the U.S., are "moving to the right," and that unlike in most groups, older Latter-day Saints are most likely to be Democrat, suggesting that this trend may continue for a while. While this may be the case in Utah, it isn't nationwide.

First, a disclaimer. I am not, like Quin Monson, a statistician. I gathered these numbers from published surveys to understand the changing Mormon electorate in the immediate aftermath of the 2012 election, an election in which I was so solidly in the tank for President Obama I was directing Mormons for Obama.

Second, much of Hunter Schwarz's article rings true. In my ward in a Florida college town, the young married couples where the husband is studying law/medicine/business tend to be much more conservative than the older professors. Many of my Utah-based family members and friends were very excited about the Romney candidacy (as was I, once upon a time). However, as the tremendous diversity of "Mormons for Obama" made clear, the Mormon electorate is diversifying. Let's look at some numbers, keeping in mind that small population sampling makes all of these approximations at best and that, again, I'm not Nate Silver:

(Be sure to look at the source articles in the notes for comments on methodology, limitations, etc.)

Quin Monson did some interesting work in 2012 regarding the source of the Mormon surge for Romney[3]: 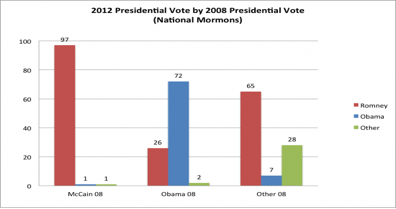 The red column in the middle comes from one-quarter of Obama supporters in 2008 (when LDS support for the Republican nominee hit a recent low) returning to support Romney. As can be seen on the right side of the chart, a far higher percentage of 2008 third-party voters were drawn to the Romney campaign (65% vs. 26%). But as the table shows, even with the “native son” advantage enjoyed by Romney, the increasing diversity of LDS membership and the attraction of Democratic Party policies kept Romney’s share of the LDS vote below the margins received by George W. Bush and Bob Dole.

The 2016 campaign is shaping up to be centered on questions of stagnating wages/wealth inequality, protecting everyone's access to healthcare, humane immigration policies, and preserving our climate and environment. I'm bullish on the Democratic share of the LDS vote continuing to increase. We'll be blogging about these issues and many more right here at MormonPress.