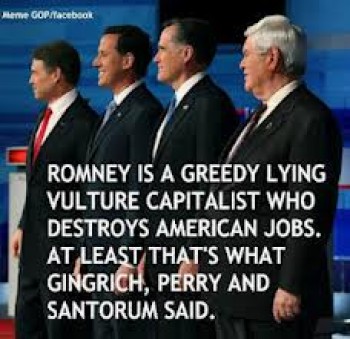 Matt Taibbi recently wrote an article for Rolling Stone magazine all about Mitt Romney and his time at Bain Capital. As has been well documented that Romney founded the private equity firm in 1984, and ended up making a fortune for his efforts. The article, Greed and Debt: The True Story of Bain Capital, gives some detail into how Bain operated, and sheds light on as to why even conservatives like Rick Perry referred to their business model as “vulture capitalism.”  While Taibbi clearly does not provide an impartial analysis, the piece does provide some interesting insight.

So how did Romney and his friends at Bain make millions? I’ll try to explain it briefly, but bare with me, it is not only a little complicated, but mind-bogglingly crazy. Basically, Bain would put up some amount of their own money, say $5 million, and then borrow another $300 million or so from a bank to purchase a struggling company. The target company’s chief officers would receive large bonuses for selling, and Bain would get a controlling stake. The company, now saddled with the $300 million dollar debt (why that is fair I can’t tell you), would be forced to pay millions in management fees for Bain’s recommendations about how to dig out of the hole they now found themselves in – which usually involved ‘reducing costs’, aka, firing workers and cutting benefits.

Romney and friends would also make money by giving themselves bonuses paid for by the company. Termed “dividend recapitalization,” it basically amounted to giving your self a bonus with someone else’s credit card. For example, after buying KB Toys in 2000 with $18 of its own money, and $302 million in borrowed funds, Bain induced the company to redeem $121 million in stock and take out more than $66 million in bank loans – $83 million of which went directly into the pockets of Bain's owners and investors, including Romney. KB later went bankrupt and people who had worked there for decades didn’t even get one day of severance pay.

Not mentioned in Taibbi’s piece, but also interesting, are Romney’s connections with investors who were directly linked to Salvadoran death squads in the 1980s. Having difficulty attracting sufficient initial investment capital, Romney traveled to Miami in 1984 to meet with Salvadoran exile families, a number of which had direct links to death squads committing atrocities during El Salvador’s brutal civil war. Bain received some 40% of its initial investments from the parties in question, which Romney/Bain now admit were linked to death squads. Romney’s defense is simply that Bain checked them out, but no red flags came up. But according to the U.S. Ambassador to El Salvador, Robert White, “The Salaverria family (which invested heavily in Bain) [were] very well-known as backers of D’Aubuisson. These guys were big-money contributors...They were total backers of D’Aubuisson and the extremist solution, including death squads."

Granted, it is impossible to know everything about the people you do business with, but when family members and close associates of your business partners are well-known in their home country for their ties to paramilitary groups, to suggest Bain carefully checked them out, or checked them out but found nothing, is suspicious at best.

Is any of this illegal? No it is not, just as stashing your fortune in off-shore bank accounts to avoid paying taxes is legal, which Romney also freely acknowledges he does. The question is not whether or not Romney committed crimes amassing his fortune; rather the question has to do with what these facts say about Romney’s character, as well as his views about what is or is not a moral way to make money.

Romney is shrewd, I will give him that. He found out how to make millions loading up companies with debt, paying off their executives, and letting others [the employees] deal with the consequences. But this election I am looking for something more than just clever. How about you?
Contributors Romney
Do you like this post?
Tweet