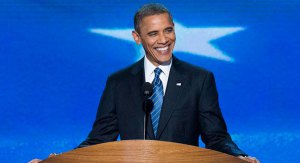 The DNC is over; it is like saying goodbye to a good friend.  But before I say how much I love and respect President Obama, and how inspired I felt listening to him speak Thursday night - "like General Conference come early," (if I can be egotistical enough to quote my own tweet,) and how I felt like his speech renewed hope for America and brushed aside the RNC's mockery and derisive comments of Obama's call for change, like chaff driven before the wind - before I say all of that, I have a couple of complaints to make.

But don't close your browser - it is not what you think.  I realize that some might have found the tone of the DNC to be too harsh and critical, like this blogger at 1MormonDemocrat, but that's not what I'm complaining about. (I took a bit of a drubbing for my "I like Mitt" post from several days back, so I have no interest in being "nice" and getting more feedback like that.)  My problem with the DNC is: WHAT WAS WRONG WITH THE CAMERAMEN? Did anyone noticed how the side view cameras started shaking anytime they panned back from the speaker?  It felt like one of the Bourne films, or even worse, that some Republican-leaning small business was trying to sabotage the DNC.  Additionally, the camera seemed to find their audience pan shots at the most inopportune times: when a woman was rubbing her nose, or a child was biting his nails, or Michelle was talking to the Castro Wonder Twins, not paying attention at all.  And some of the cuts to the audience were so quick, I was constantly wondering if there wasn't some subliminal advertising in there.  That said, they seemed to have it figured out by President Obama's speech on Thursday night.

But back to the other speakers: John Kerry and Joe Biden unleashed a flurry of attacks on Mitt Romney and the Republicans.  (Ask Osama Bin Laden if he is better off now than four years ago!) and (I found it fascinating last week — when Governor  Romney said, that as President, he’d take a jobs tour. Well with all his support  for outsourcing — it’s going to have to be a foreign  trip.)

But the prize of the night was hearing our President spell out what four more years would look like.  And I dare not comment too much on his near perfect oratory excellence.  Instead, I will just be lazy and post the whole thing here:

In a post script to Thurdsday night, we all woke up Friday morning to some stagnant job numbers; this proved a brisk cup of coffee for the Romney campaign: "If last night was the party, this morning is the hangover."  (He probably should have said "this morning is the withdrawal," because we are all missing the DNC a lot.) Regardless, I love it when we Mormons make drinking analogies - I mean, it's the one thing we know so much about.  Romney might also have been rumored to say, "Obama's jobs plan is about as effective as giving a cup of sacramental wine to an inebriate," and "the Obama stimulus had money bouncing wildly around the country like a game of beer pong," and finally, "what was in that glass anyway?"  And so the campaign continues.

President Obama may get a bump in the polls after three days of great speeches (that actually talked about the President, rather than one's self,) but at this point America is just sitting around waiting for the debates: the two men together on stage with no pesky barriers between them - having to answer each other's claims face to face - without Twitter, Fox News, or Cutter and Priebus to answer for them.  (And based on Thursday night, I think Obama is going to do just fine.)
campaign Contributors democratic national convention DNC mormons Obama Romney
Do you like this post?
Tweet