The final Presidential debate was... disappointing. It was filled with some great one-liners that will have some funny memes ('the 1980s called, they want their foreign policy back' 'We have these things called aircraft carriers and planes land on them. We have ships that go underwater, nuclear submarines.').

Romney frequently came off as naive saying sanctions should have been put on Iran sooner (which would have been prior to Russia and China being on board, meaning they'd be buying and selling from/to Iran nullifying our efforts) and with comments like "America hasn't dictated to other nations." However, the most disappointing aspects of the whole debate were on points that each of the candidates agreed upon, namely America's war-like nature. We spend more on our defense than almost the rest of the world combined. Why are we willing to spend SO disproportionately on military and yet are the only first-world nation without a national health care system? Why aren't more Americans angry about how war-like we are? President Spencer W Kimball said the following:

We are a warlike people, easily distracted from our assignment of preparing for the coming of the Lord. When enemies rise up, we commit vast resources to the fabrication of gods of stone and steel — ships, planes, missiles, fortifications — and depend on them for protection and deliverance. When threatened, we become antienemy instead of pro-kingdom of God; we train a man in the art of war and call him a patriot, thus, in the manner of Satan’s counterfeit of true patriotism, perverting the Savior’s teaching:
“Love your enemies, bless them that curse you, do good to them that hate you, and pray for them which despitefully use you, and persecute you; That ye may be the children of your Father which is in heaven” (Matthew 5:44-45).

How can we call ourselves a Christian nation while being so heavily involved in wars? How can we be a country that prides itself in justice when we are all seemingly ok with drone killings of American citizens on foreign soil? Why are we so eager to ignore the innocent deaths caused by our military efforts in Iraq and Afghanistan? Here were President Joseph F Smith's feelings on war during WWI:

One thing is certain, the doctrine of peace by armed force, ... is a failure, and should without question forever be abandoned. It has been wrong from the beginning. That we get what we prepare for is literally true in this case. For years it has been held that peace comes only by preparation for war; the present conflict should prove that peace comes only by preparing for peace, through training the people in righteousness and justice, and selecting rulers who respect the righteous will of the people... The true religion of Christ, which teaches peace on earth and good will to man, and which would prevent them [the rulers] from engaging in war and slaughter, they have never adopted. While they seemingly acknowledge allegiance to the Christian religion, they are not touched nor influenced by its teachings, for these are fundamentally opposed to war and discord, and look to a final gathering of all mankind into one great brotherhood ruled by love. These leading, so-called Christian rulers of the nations pretend to pray to the God of peace and love, and yet with all their might make preparation to fly at each others' throats, even as the uncivilized heathens do who have never heard of Christ. Some are inclined, therefore, to consider their course an indictment against the gospel of Christ, because it has had no influence on their lives. It is not so much an indictment against the gospel as against those professing Christian rulers "who draw near to me with their lips, but their hearts are far from me; they teach for doctrines the commandments of men; having a form of godliness, but they deny the power thereof." 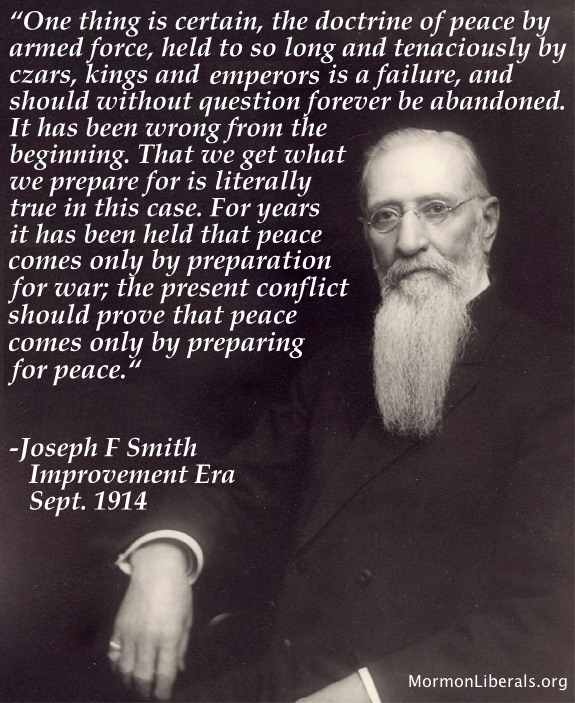 Add to this the LDS doctrine about war in Doctrine and Covenants section 98. We are to "Renounce war and proclaim peace" and are to never commit the first OR second attack. Additionally, if we choose to not return attack then God promises to multiply our blessings.   This brings us to the other item that was an irritant: Israel. Israelis and Palestinians are all our brothers and sisters. Palestinians were not mentioned once. It was a contest to see who loved Israel the most. Israel has been violating international agreements by consistently building on Palestinian land. If we as Mormons want to take the view that we need to side with Israel because they are the 'chosen people' returning to and reclaiming their 'promised land,' are we also willing to allow Native Americans to reclaim the land we've taken from them through genocide? Hopefully in the near future we'll be willing as a country to elect leaders more interested peace and life than continued war. 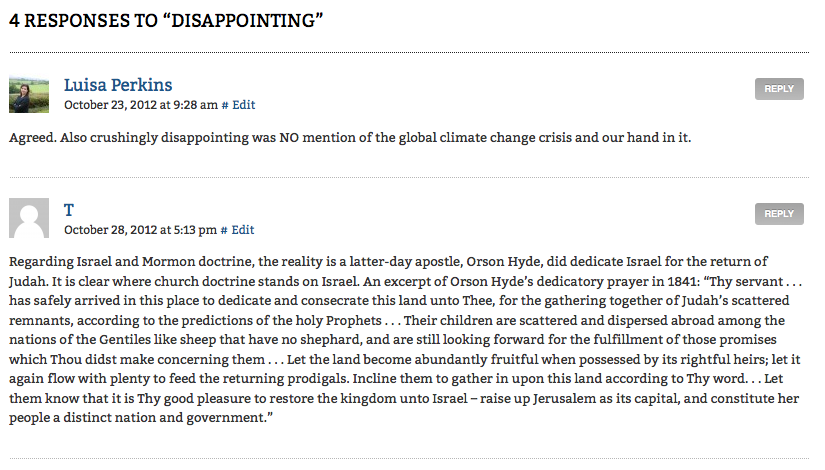