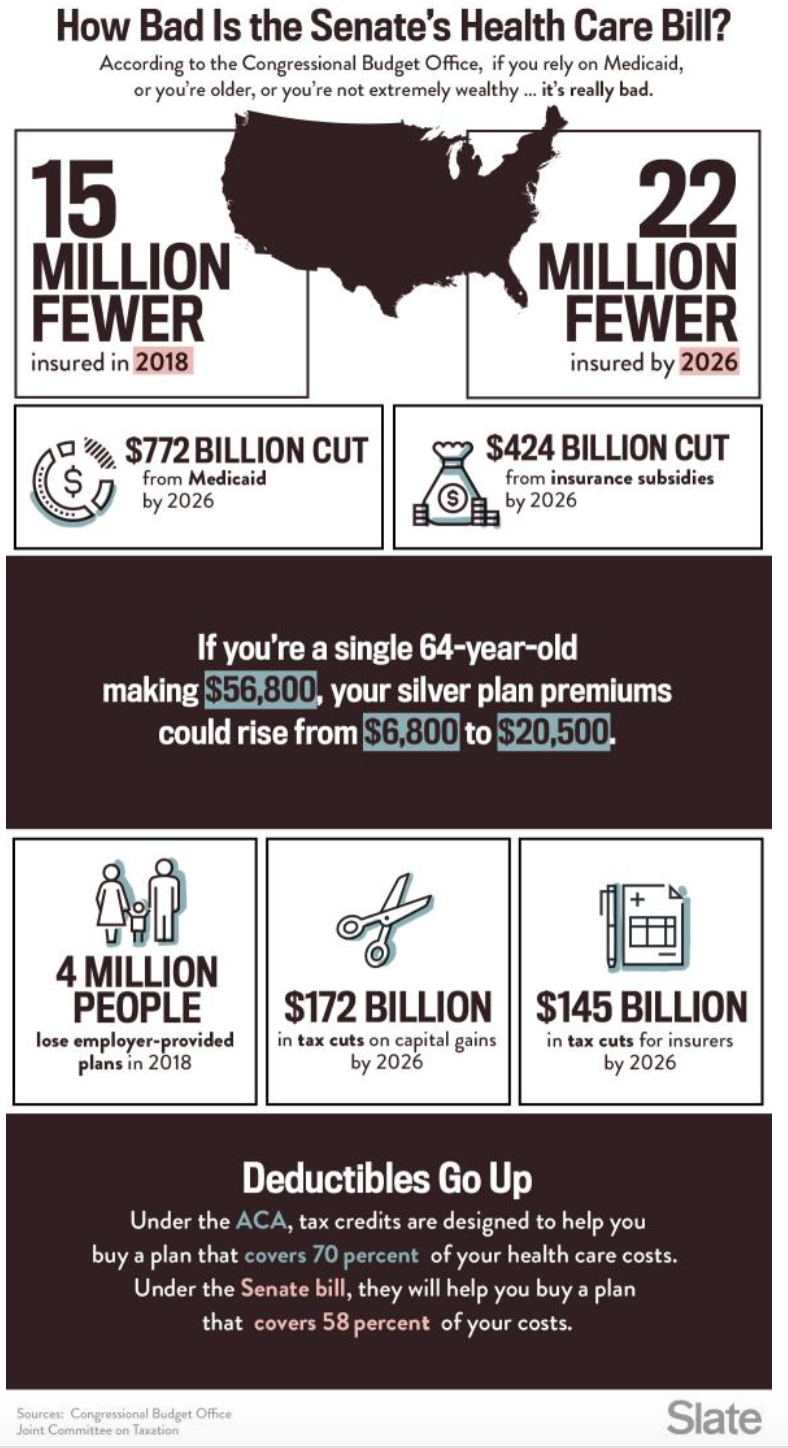 This week, the Senate GOP will release a revised version of the BCRA to try and get the 50 votes they’ll need to “repeal and replace” the ACA. Though Donald Trump promised his health reform plan would have “insurance for everybody” initial estimates of the BCRA by the Congressional Budget Office (CBO) projected 22 million people would lose insurance by 2026.

As a third-year medical student, I witness the blessings and curses of our current healthcare system. For those who can afford the cutting-edge interventions and wonder drugs, our hospital is a godsend, but for those with stingier plans or no insurance at all, it is a stumbling block.  Many of those without insurance cycle through our emergency department, with acute and costly exacerbations of diseases easily and more cheaply managed in an outpatient setting. Many times, they get admitted, driving up costs for those who pay for insurance, whether purchased privately or through an insurer. Despite spending the highest percentage of GDP on healthcare of any developed nation, we are routinely mediocre in health outcomes.

In the medical field, we use a unique sort of note taking system to assess the condition of a patient and assess their progress during their hospital stay. We start off with a History and Physical (H&P) note on admission and use SOAP notes to track them longitudinally. H&P’s collect information about everything that has happened to the patient before they get to the hospital and SOAP notes assess the Subjective and Objective observations and then develop an Assessment and Plan.

The bill presents today as a revision to the Senate GOP leadership’s effort to repeal and replace Obamacare. Though Obamacare markets have stabilized in recent months and premiums appear to have plateaued, the Senate GOP continues to push forward on their attempts to repeal President Obama’s landmark legislation. The bill introduced minimal changes including

Since inception on June 22, 2017 as the Senate version of the American Health Care Act (AHCA), the House GOP plan to repeal Obamacare, the BCRA is determined to provide less coverage at higher cost. Despite being more “compassionate” than its house counterpart, the BCRA results in nearly as many people losing insurance as the AHCA. In addition, it has deeper cuts to the Medicaid program by further restricting the proposed per capita Medicaid allotment. Much of the “cost savings” in this bill is used to roll back taxes implemented by the ACA.

The bill also included waivers for states to remove preexisting condition protections and eliminate “essential health benefits” requirements. While trying to keep a tax credit/subsidy structure like that of the ACA, the establishment of categories meant astronomical premium increases for older Americans, especially those most unable to afford it. For a more detailed comparison between the ACA, AHCA, and BCRA see note from the Kaiser Foundation.

The bill was slated for passage before the July 4 recess, but thanks to the dedication and coordination of “the resistance,” 50 votes were not to be found for passage. The bill also suffered from lack of support by the general population, with a 17% approval rating. Due to this set back, the bill was removed from consideration and the “Group of 13” gathered to once again reconsider their position. Much like it’s “meaner” cousin AHCA, the bill was expected to return for consideration in a few weeks.

On July 13, a revised version of the bill presented to the American people.  The changes from the original version are largely superficial, and include allowing health savings accounts (HSAs) to be used to pay premiums, increased funding to fight the opioid epidemic, keeping in place some ACA taxes, allowing insurers to offer non-ACA qualified plans, and providing extra money for market stabilization and high risk customers.

Though these proposals represented some improvements to the original BCRA, the bill remains unable to perform to baseline performance of ACA. Even with the increased funding, it is distressingly short of funding levels in the ACA. The bill continues per capita Medicaid reimbursement that projects to eliminate many from the program.

The BCRA is the Senate GOP proposal to repeal the ACA. Though modified with increased spending to stabilize markets, fund high risk pools, and fight the opioid crisis, it continues to suffer from leaving around the same number of people without insurance as the original proposal. With 22 million projected to lose insurance by 2026, the bill is a callous attempt to roll back the social safety net. By decreasing the amount of people covered and the quality of coverage for those continuing to be insured, the BCRA is an unprecedented bill that provides worse coverage to less people for more money.