I am currently sitting at my desk listening to the most recent installment of Marc Maron’s WTF podcast interview with President Obama.

This interview caused a medium stir this week with its frank discussion of race in current American culture. The president notes that the most disgusted he has ever been in his presidency was just after the shootings at Sandy Hook when it became obvious that congress wasn’t going to do anything to improve our crazy, third world gun safety policies. I remember that moment distinctly thinking:

#Obama speaking from the Rose Garden is as visibly mad as I have ever seen or heard him. #utpol

I remember thinking “If anything is ever going to happen to change the rules on gun control in this country, this is it.” Since Columbine, no event was more tragic, more personal, more public, or had more potential to spark a discussion. But instead of improving our system, we began discussing extending the assault weapons ban and Senators started thrusting rifles in the air at NRA rallies. We never got to the discussion. We never fixed anything. We spun the real issue to a watered down version of reality. And thus, people continued to get shot.

Now we are a week removed from another mass killing in a Charleston church. Not an accident. Not an effect of mental illness or abuse or retaliation. This one came purely from hate and the ability to all-to-easily pick up a gun to apply that hate in a house of God. And so we wait for the discussion to start again. We think “if anything is going to happen, this is it.” And what has happened so far? We have spun the discussion away from gun safety and race to some obscure debate of the symbolism of a flag at the South Carolina State Capitol. Candidates for president are being hailed for their outspoken opposition against the flag rather than being grilled on how they plan to prevent future mass killings predicated on race-based hate. The news cycle is dominated by discussing the heritage of the Confederacy, talking about 150 year old history before we are willing to discuss the future. Don Lemon holds up a flag from a studio 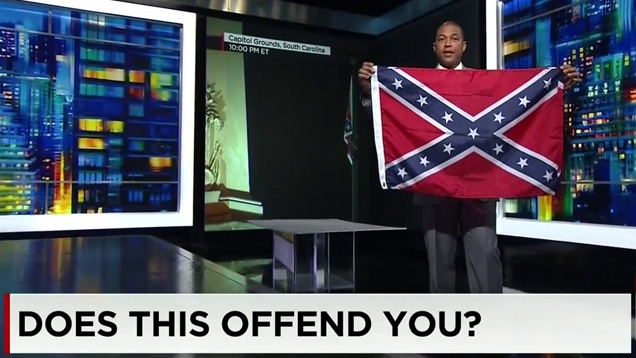 in New York while parishioners gather and plan funerals for 9 slain African-American’s whose legacy may very well end up being known as “the people who finally took the Confederate flag from the South,” a story that better fits on the front page of the April 9, 1865 Appomattox Times. We have started a discussion that will end with the retirement of a flag that was retired more than a century ago. And what will we talk about once that flag comes down? Nothing. The legacy of Charleston will be symbolic and nothing real will happen.

I suppose the flag discussion is easier. It has an end game. When the flag comes down, politicians will be praised. People will feel like something has been accomplished, and isn’t that what we want. We want to get something done, we don’t care if it’s done right.