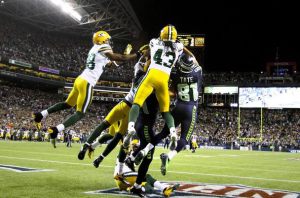 The Seahawks beat the Packers last night in this amazing down-to-the-wire knuckle-biter, (the finger nails were all gone by the end of the third quarter,) where Russel threw a 24-yard touchdown to Golden Tate.  Clearly, there were angels in the endzone to solidify this miracle of epic proportions.  (For optimum effect, reread that last line imagining Sean Connery's voice.)  Of course, this wasn't without controversy: football fans all over the country called foul (baseball?) in that M.D. Jennings maybe/probably/most-likely had a hold of the ball before Tate got his hands on it, making the play an interception, not a touchdown, as it was called by the high-school-football-type referees called in to replace the striking professional refs.

After the call, all of us in Seattle jumped, cheered, and high-fived each other, and even if us Hawks fans acknowledged that it might have been an interception, we sang together in one unified harmonious chorus: "We'll take it."

And President Obama also jumped into the fray, calling the outcome "terrible," and Wisconsin Congressman Paul Ryan tried to score a political touchdown of his own by comparing the amateur-refereeing to the Obama administration.

Well, Ryan's comments seem to further the assertion that the Romney campaign is struggling and desperate.  The way I see it,  Mitt Romney is running out of ways to get himself to the White House.  While all roads lead to Rome, there's only one or two that'll get him to D.C.  With a series of missteps in the past few weeks (admittedly, no-apologies-Romney doesn't publicly refer to them as that,) Romney's image as an out-of-touch, privileged, and somewhat surly rich man continues to surge in inverse proportion to his chances of winning the election.

I am starting to think that he really only has a few ways to win at this point:

1.) Voter suppression.  I used to be unconvinced that this was a real thing.  However, I can no longer pretend this isn't actually happening.  Read here for an article on its effect on Latino voters.   We even have reports of people trying to register ONLY Romney voters.  See below:

[youtube http://www.youtube.com/watch?v=S7RvuSnsNGI?rel=0]
But I have to admit that my heart goes out to this cute little girl - I swear she looks like a Mia Maid I knew growing up.  And plus, the woman with the camera is so mean!  She yells at her and calls her honey bunch!  My opinion (although patronizing and sexist) is that we should give this poor girl a pass because she seems so nice and sweet, and I think that her father probably made her do this.

2.) Money. Now that Romney and Obama are the nominees, spending on the part of both candidates is astronomical.  According to PBS News Hour yesterday, the rates of spending on TV advertisements has doubled the amount of what was spent in 2008.  Both candidates are after that (unbelievably) undecided middle-voter, and these ads target them without regard to truth or reality.  And of course, this says nothing about the Super-PAC money out there.  Michael Moore predicted a Romney win for just this reason: "Mitt Romney is going to raise more money than Barack Obama. That should guarantee his victory."  True enough; he does have a lot of dough to spend, and if Romney ever needed his wealth to buy something, the time is now.

3.) A miracle.  I believe in miracles, but I don't know that the Republicans should wait for seagulls to swoop down and gobble up the elderly and minority voters in those states that have overturned the voter-suppression laws.  However, that doesn't mean that some other natural disaster or man-made calamity couldn't set the president off of his stride.  Just look to Bush (W.) in 2000.  A bunch of hanging chads and that Michelle Bachman look-alike handed him the election - and of course, this was subsequently confirmed by the Supreme Court.  But all of that refers back to point number one.  So could more poor job numbers or an uptick in the Middle East conflict send voters fleeing for Romney?

But alas, pondering on a Romney win causes me to think about that wonderfully awesome football game from last night with its game-winning Hail Mary pass; while Republicans would celebrate if Romney was elected in November, somewhere deep in their heads they might recognize that it came about through happenstance, a bad call, or even nefarious means.  And just like in 2000, when the presidency was given to George W. Bush by the Supreme Court, the Republicans will intone simultaneously, "We'll take it."
campaigning Contributors Paul Ryan Romney Voter Suppression
Do you like this post?
Tweet