And so it continues...

As if it wasn't bad enough that Rick Santorum decided to criticize Obama's faith, Mitt Romney decided he needed to do the same thing yesterday.  My guess is that Romney saw Santorum's tactics as the straight and narrow path toward better poll numbers, and he demonstrated this today when he parroted Santorum at a campaign rally, claiming that Obama has "fought against religion" and has a "secular" agenda.  See the article here:

The Christian Right is at the heart of Romney's free-fall in the polls.  They don't like him because he's a flip-flopper; they don't like him because he's Mormon.  And Santorum seems at least smart enough to capitalize on this weakness.  He is the last standing alternative to Mitt Romney, and so he says what the Evangelicals want to hear; his comments about Obama's "phony theology" and his stand against prenatal screenings are just empty rhetoric meant to woo the Christian Right of the Republican party.  He knows that Arizona and Michigan are week away, next is Washington, and Super Tuesday is afterwards, (we so excited) and he has a chance to win big.

I thought Romney wouldn't go this route considering that Mormons are told that they aren't Christian all the time.  But this isn't the first time Santorum has done this.   He claims that if you are a liberal, you can't be 'religious' and you certainly aren't Christian.  (See link below where in 2008 Santorum claimed that there is no such thing as a liberal Christian).  So Sorry Eric, you do not exist.

Both Romney and Santorum are on a roll (holy rollers).  They've found a cadence for the religious campaign stumping, and they can only go down from here.  The Crusades 2.0 are just beginning.

Here are Santorum's latest comments on Monday as reported on MSNBC's The Last Word:

"I don't know if you've been listening to the president, the secretary of state, and other members of the cabinet, when they talk about freedom of religion... They don't say that anymore.  They talk about freedom of worship; well, you folks all know there's a big difference between freedom of worship and freedom of religion.  Think about what I just said.  We have leaders of this country who are now narrowing the view of what religious liberty is in the first amendment."

What does this even mean?  Never mind that President Obama just talked about the importance of protecting "religious liberty" on February 10th at a news conference.  Regardless, it seems that using the term "freedom of worship" broadens 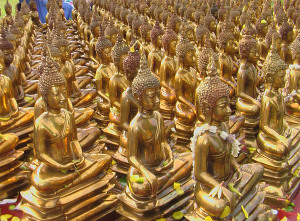 the view of religious liberty.  Many people lead spiritual lives but are not connected to a specific religious institution.  Many people follow a moral or value-system but are not believers in a God.  So what of them?  Shouldn't their right to worship be valued, protected, and recognized?

I think Joseph Smith said it best, and Romney and Santorum might learn something here:

Articles of Faith 1:11 - We claim the privilege of worshiping Almighty God according to the dictates of our own conscience, and allow all men the same privilege, let them worship how, where, or what they may.