I wasn’t going to march in D.C.

I had a lot of reasons, pretty good reasons too. Cost, cold, children, work, Utah’s legislative session starts Monday (it’s a nuts time of the year for me) etc. etc. etc. I was planning to march in UT and SLC.

I changed my mind. I marched. This Mormon girl joined with thousands of her Mormon sisters and we marched all around the world. I marched in D.C. Some of my LDS sisters are marching right now in SLC. I am on my flight back home, and their pictures on social media are inspiring. 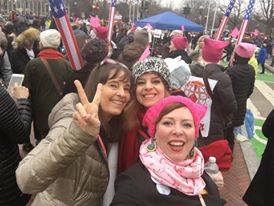 I saw this news story about my friend Jann Haworth taking her Work in Progress mural to the D.C. march (I cut out the stencil for Indira Gandhi!), and I knew I had to go. I had to be part of art and activism. It worked out rather miraculously. Practically serendipity! I felt my female ancestors working for me beyond the vail. I was able to get my flights on points. Philadelphia had been the cheapest airport which is near my grandparents so I was also able to spend time with family. I had a friend who’d chartered a pair of buses of marchers departing from Philadelphia. It was full, but they had a cancellation right as I decided to come and I was able to snag the last spot! I suddenly had loads of Utah friends to march with. I was able to get an inexpensive room at the Hotel Monaco in Philadelphia Friday night because our bus was leaving from there at 5:30am.

I’m so glad I went. Vox recently reported that they couldn’t see a Mormon Democrat presence at the Park City March but I know there were hundreds if not thousands of of Mormons at that march. I know that there were thousands of Mormons who marched in D.C. and around the world. I personally know around 300 mormon women who marched in D.C. If you marched, roll call below in the comments! Or, blog your experiences on Mormon Press. Contact us at hello@ldsdems.org to submit a blog detailing your memories.

Violence is definitely wrong and I vehemently denounce responding to President Trump with violence. Those few who riot are wrong. That being said, marching and other forms of nonviolent civil disobedience are constitutional rights and truly American virtues. I marched to say that I am watching. That I will be vigilant against discrimination. I marched to say that I will protect our constitutional rights. I marched to say that I can support President Trump and the GOP-led Congress when he/they do well. I'm sure there will be some, maybe several, policies that are good, that is the nature of politics. But when he and the GOP enact poor policy, I will speak up. Marching  was my way of saying, I am watching, I am engaged, and I will "stand up and speak up" (to quote President Nelson) when needed.

But, as a liberal and as a Mormon who believes in treating others as Christ would, I will treat President Trump with respect as best I can while still expressing my political voice. I will call him President Trump. I am bothered by conservatives who refused to address President Obama as President. I'm not going to call Trump Hitler 2.0 although I am certainly worried by much of his speech and policy ideas. I am willing to applaud when good happens, and speak out when I disagree. I’m glad that as Utah Chair of LDS Dems and vice-chair of LDS Democrats of America I was able to be there and represent our voice.

It was an early morning. I woke up at 4am (2am Utah time) to get ready. I’m grateful that it wasn’t cold in D.C. My group had rather ingeniously come up with the idea of carrying giant inflatable flag polls so we could stay together in the crowd. I did end up loosing them but I was able to find them again! Despite leaving at 5:30am, traffic was heavy and we didn’t arrive until after 10am. We eventually found our way to the Mall. This is what it looked like at TEN AM! 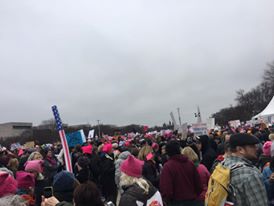 We kept trying to find a way into the rally area on Independence Avenue. I lost my bus crowd trying to get in, but I eventually was able to squeeze in near the Smithsonian Castle. I kept trying to get up to the Air & Space Museum because I knew many Mormon Feminists (including one of my best friends from High School, John Searcy and his family) were there. However, it was SO TIGHT (like cheek to cheek), that eventually I couldn’t move forward anywhere. I did have a good view of a jumbotron and was able to enjoy speeches by Angela Davis, the national president of AFT, Janelle Monae (!!!!!), Alicia Keyes (also !!!!!!), Sophia Cruz, Scarlett Johansen and way more. The rally was over 5 hours which is way tooooo long (it began at 10am, I was able to squeeze in around 1). 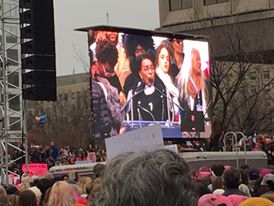 My area finally began marching around 3. Marching was the most miraculous experience. The rally area was already impressive: a solid mass of mostly hot pinks p**** hats (we don’t say that word on MormonPress!) all the way from 1st street to well past Washington Monument). Once I left the Independence Avenue area, we were able to see the true story.

We were supposed to only be on independence and then march to the ellipse and near the White House. For the rally, independence was solidly packed (like butt to butt, you couldn't move) until at least the Washington Monument. But it wasn't enough. We filled the entire parade route PLUS it was a solid mass of hot pink down all streets between the Capitol and the White House. The mall was full (where we weren't even supposed to be); Independence, Constitution, Pennsylvania Avenues were full; 1st through 17th, the letter streets were full and shut down all the way to H street which I used to run to my bus to get me back to Philadelphia before we left at 5pm. And although cars could drive on H street, we filled the sidewalks. I know most of the news media say 500,000 people. I’ve seen estimates that we had 2,000,000 people in D.C. for the march. We marched wherever we felt like. That’s what happens when you’re over a million people. I know many news reports say 500,000+ but I think that estimate was just of the rally area on Independence Ave. 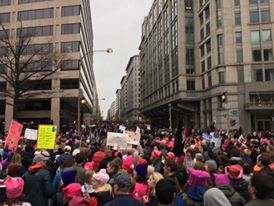 We were peaceful. We were practically falling over each other to be kind and courteous and make room for each other. Not a single arrest was made. Everyone was happy, everyone was spreading messages of love. I am truly grateful to have been present at such an important, historical event.

And to everyone who marched: VOTE THIS YEAR AND EVERY YEAR THERE AFTER. Do three things right now: