Liberals in the Midst 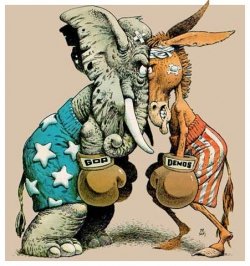 I wish I could see an Excel sheet printout that enumerated all the going-ons during the many Sunday School lessons taught this past Sunday (of which Mosiah 29 was discussed.)  I read a couple of comments on the Mormons for Obama Facebook group and heard a few things from some friends, and apparently this is a nearly impossible lesson to present without it getting political - although from a distance, it is somewhat difficult to see why.  (But then again, from a distance, we all have enough and no one is in need either.)  Mosiah 29 is about righteous government which is something we all can agree on, but invariably someone makes a comment that alienates or isolates another.  Of course, we'd assume that since we are all Mormons we could find common ground, but alas...

I suppose that some of our conservative Mormon brothers and sisters think that Obama is leading the country down to hell (King Noah-style), and some of our liberal LDS friends think that Romney will serve a similar function.  Thus, our Sunday School teachers must pull out the proverbial cattle prod and steer their students in the paths of political neutrality.  (But really we should just stagger the study material by one year.  Why is it that we have to study this chapter during the presidential election cycle?)  Interestingly, while most Mormons tense up when political topics are broached at church, other Christians relish in it. (Jeremiah Wright?)  I read an article once that quoted Larry King, (who sometimes attends church with his LDS wife,) saying that Mormon sacrament meetings were so far-removed from politics and current social issues that they were boring.  Well, maybe he didn't say that exact quotation, but according to this report on the Cougarboard, he became so frustrated during one testimony meeting, he swore and threw his hands up in disapproval.

But ultimately, discussing politics is not the end goal of church attendance; our hope is to learn to be more like our Saviour.  However, in our attempts to be better Mormons, we sometimes forget the importance of being a good Latter-day Saint.  We have received several emails that express appreciation for the site - for the connection people feel in finding other Mormons who share their political beliefs.  I've also read similar comments on the Mormons for Obama Facebook group, and I believe that this comes from a sense of being alone in the (ward) world.  While we should feel a kinship with our fellow saints, sometimes the side comments, questions, and accusations can set us apart.

Here is a part of one email we receieved:  "Before a general priesthood meeting our ward met for a party, and it was tough to hear (one of the leaders in the ward) complain about Obama 'always talking about feeding the poor - feeding the poor!' I just couldn't bring myself to point out the irony of the statement just before we heard Apostles of the Lord tell us that we are our brother's keeper."

Another email said this:  "Most of the time I feel like I'm in hiding about my "true" self in my small (a little blue dot in a red state) town. I feel I can't really be myself without being ostracized for my political beliefs. They're just a few of us in this town, and we've vowed (behind the scenes) to stick together. But mostly in silence...I don't want to fight and bicker and lose friends, so I just keep my mouth shut."

Seriously.  We shouldn't feel alone at church.  And this type of thing is the exact opposite of Alma's invitation to the Nephites to be baptized in the Waters of Mormon (Mosiah 18:8-10).  So I guess the point is something like this: conservative Mormons, don't forget that you have liberal Latter-day Saints in your midst! And liberal Latter-day Saints: let's show love for those Fox-News-watching, Rush-Limbaugh-listening, Ann-Coulter-book-reading, Glen-Beck-loving Mormons on our home and visiting teaching lists!

And of course this is true even amongst Obama supporters; we have some huge differences in our thoughts and interpretations.  This was evident as we tried to address the issues of marriage equality; after reviewing our posts, one reader of the website felt alienated by the articles supporting Obama's position.  So I am trying to remember: regardless of how far apart I might feel from the gun-toting, SUV-driving, Romney-voting Mormon sitting next to me in Elder's Quorum, he is my brother in the gospel, and we have more that knits us together than that which divides.
Book of Mormon Contributors featured mormons Obama Republicans
Do you like this post?
Tweet