Living in the Field 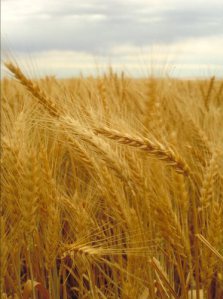 I have been told I live in the field. I’m not talking about the mission field that is white already to harvest - Utah is actually rather cloudy and brown right now from all the fires, not to mention the raining ash. (Last days, anyone?) I’m talking about a unique field in which I’m a progressive liberal Mormon living in the heartland of conservative, Mormon majority, Republican Utah.  I’m a sophomore Political Science major at BYU who works full time at the MTC, and every day I am reminded that I’m different (and not just because almost everything I own is plastered with Obama stickers and logos).

I wasn’t always so vocal about my political opinions here in Provo. During my first few months at BYU, I distanced myself from identifying with any party; I knew I was liberal, but I was hesitant to endorse a platform about which I felt under-informed. I feared the inevitable moment when some far more educated person would tear my opinions to shreds with their superior evidence and research. But the more I found myself making pro-Democratic comments in my small Honors American Heritage class (many thanks to my professor, Greg Taggart, for always giving me the floor to make the opposing point) and the more I studied the issues, the more I realized I needed to come out of the closet and simply embrace my affiliation with the Democratic Party.

Since then, I’ve become much more comfortable with identifying as a Democrat - not just because I can’t in good conscience endorse the alternative, but because I believe so strongly in the vision and commitments of the Democratic platform. While it’s annoying to frequently hear anti-liberal, pro-Fox News comments, and while I am in the political minority of students at BYU, living in Provo has forced me to be able to articulate exactly what I believe and why I believe. I’ll always be grateful for that.

I’m proud to say, and I say it at every opportunity I get, that the BYU College Democrats is the largest College Democrats chapter in Utah. I love the shocked expression people acquire when they hear that, because it emphasizes that Mormons are not a unified voting bloc, and that the youth and young adults of the LDS Church will become increasingly more diverse in their political views than ever before. We’ve seen already the groundswell of support for the LGBT community within the Church, and much of that support comes from young adults who did not grow up with the same biases and culture that older members of the Church may have.

Of all the challenges of being a liberal in Provo, the deepest and most hurtful will always be the questions of my faith. I don’t write about this to ask for your pity or to encourage you to be more loving to everyone. I write about this simply because it is the hardest thing for me about being a liberal in Provo.  It’s not easy to be told that you have less faith, that the path you are on will likely lead you to become apostate, if not at least to leave the Church, and that then your future children will grow up outside of the gospel all because of your selfish choices. When I was quoted for an article about Pro-Obama Mormons back in May, the comments users added online questioning my standing in the Church were the most troublesome. When the ruling on the Affordable Care Act was announced, (I was eagerly listening to C-Span live with headphones on my computer at work,) I wanted to leap for joy and celebrate. But as my other coworkers at the MTC began to trickle in (this was 8:00 AM in Utah, being two hours behind D.C.), I could see their crestfallen faces. It was the only time I’ve been really glad that they all know I’m a Democrat - I did my best to hide my glee, and they shut the door so I could only hear muted expressions of their frustration and anger.

It’s this mutual agreement to leave each other space to celebrate our views that I appreciate the most, and at the same time it’s a cause of concern, given that it’s only July now and there’s still several months before the election. Because I am the field organizer for Obama’s campaign in Utah County, the Co-President of the BYU College Democrats, a volunteer for several local political campaigns, and because I hope to be more involved with Mormons for Obama efforts, I can sense that my political activity will lead to some kind of conflict sooner or later.

But despite all the tensions I’ve already experienced and expect to experience as a progressive Mormon, I know I can never go back. I’ll always feel a connection to that wonderful hymn-singing, nourish-and-strengthen-our-bodies praying, no-TV-on-Sunday, family-home-evening culture I was blessed to be raised in, but I will continue to study and seek after more knowledge about my questions without clinging to the conservatism that was also part of that culture. And with all its quirks and all my questions, I know my own journey of finding my way through this concentrated conservative field as a liberal Mormon will not be a walk in the park.

But we are all enlisted till the conflict is o’er, and that won’t just be November 2012. I look forward to the challenges in the hopes that I can convince even just one soul to understand why I believe what I do. Who knows, maybe I can plant some seeds in this field.
BYU Contributors Democrats featured mormons Obama
Do you like this post?
Tweet