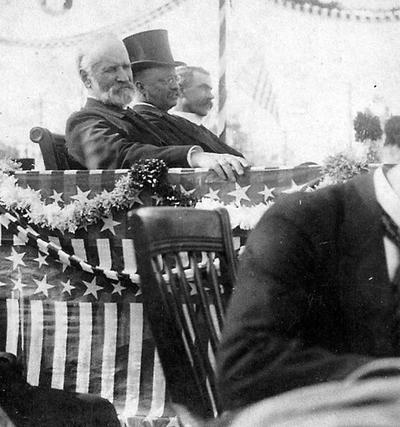 When they call the roll in the Senate, the Senators do not know whether to answer 'Present' or 'Not guilty.’--Theodore Roosevelt.

It is essential that there should be organization of labor. This is an era of organization. Capital organizes and therefore labor must organize--Theodore Roosevelt.

Teddy, as he was affectionately known, wouldn't be welcome in today’s Republican Party.  (Just take a look at the title of a book from a Fox New analyst).  Roosevelt’s legacy is busting monopolies, championing laws that favored the middle class and poor, and supporting Progressive politicians.  He broke the Gilded Age in half and we haven’t had a politician like him since.

I know for sure that two of my great-grandfathers voted for TR.  I once found an old article from my great-grandpa Fred Houghton.  He told the reporter for the Box Elder News Journal that showed the exuberance of my recently immigrated ancestor, “Today I went to the courthouse and became an American citizen.  Tomorrow, I plan on voting for Roosevelt!”

Utahns and Mormons loved Teddy Roosevelt.  It’s a long story and you can read more about it in this book or this article.  The short version is that Utah elected an Apostle named Reed Smoot to the American Senate in 1903.  The Senate put Smoot, along with the rest of the Church, on trial.  It lasted for many years until eventually Theodore Roosevelt intervened.  With the promise that Utah would “vote Republican” Smoot gained the crucial support he needed that would give Utah its most influential Progressive leader in the beginning of the 20th Century.

Unlike Hayes and other Gilded Age Presidents, Roosevelt took a risk on the Mormon people and they returned in kind, voting for Roosevelt and the Republican Party. Smoot went onto become a leader in the Senate and was no shrinking violet.  Senator Smoot was no Mike Lee or Brother Cliven Bundy either. When it came to land conservation, he defended many of the policies of Roosevelt for three decades.  According to the Utah State Division of History, here are a few things Senator Smoot helped do:

(For more information on the politics of Reed Smoot, please check out this great article.)

How did a state and people that voted so overwhelmingly for Theodore Roosevelt, Reed Smoot, and other Progressive leaders, turn into a state that supports politicians like Mike Lee and Jason Chafetz?  It’s never made sense to me.  I think it’s fair to say that part of the reason why Utah is so Republican goes back to the promise that Joseph F. Smith made to Roosevelt.  But times have changed.  Recently, our schools have lagged.  Our environment has turned into a disaster.   Our state politicians have sold out to the lobbyists and billionaires.  It’s time we return to leaders who championed the causes and ideals of Roosevelt and Reed Smoot.