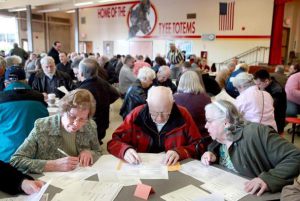 Romney won Michigan and Arizona, and Washington's Republican caucuses liked him too; now he has to make it through Super Tuesday - the real test of sorts.

And seriously, I'd be somewhat offended if Mitt Romney lost the Republican Presidential nomination to the likes of Rick Santorum.  I realize this is a strange thing to voice on a website entitled "Mormons for Obama," or when I have no plans to vote for Romney, or when I really don't even like that Romney is in the presidential contest altogether.  However, as a Latter-day Saint, I can't help but wonder if much of the dislike of Romney can be attributed to his Mormonism more than to his flip-flopping.  Clearly all the fervor in the news media over Mormonism this past week (the baptism for the dead letter read in church, racist remarks by my former mission president, Randy Bott,) would be much quieted or even nonexistent if Romney wasn't in the race.

And according to polls, many potential voters reported an unwillingness to vote for a Mormon for president (and this was before all the recent media scrutiny).  Admittedly, many of these are liberals, but a large number of these folks are also from the far right.  See one poll here.  And a more recent article reported much of the same thing:

This is when I get offended, although that might be too strong of a word.  As a Mormon Democrat, I consider Rick Santorum to be pretty "out there."  His comments on everything from contraceptives  to African-Americans does not move us forward, and I am half a key stroke away from calling him crazy, (but that is against our own submission rules for this website.) I am frustrated with "the us vs. them" mentality that exists in Congress currently, and I feel inclined to put a larger portion of the blame on the far right of the Republican Party.  So when someone like Santorum starts getting votes, and he appears to be extremely partisan and divisive, I have to sit back and wonder: why isn't Romney good enough for the Republicans?  Is he really so bad that they want a Santorum to represent them in the 2012 election? 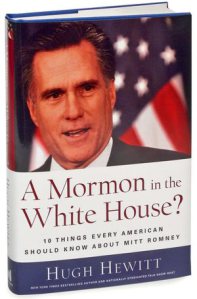 Republicans have demanded an "anybody-but-Mitt" alternative since the beginning - before the creation of the world.  They flirted with everyone from Herman Cain (!?!) to Rick Perry (!?!) to Michelle Bachman (!?!)  The list is reminiscent of a casting call for a Christopher Guest film.  (Imagine Rick Santorum holding a Shih Tzu, and you'll get the idea.)  And so Santorum gets their votes because he is the last man standing, and a Mormon in the White House is not an acceptable proposition. (Click on the picture to the right to purchase Hugh Hewitt's book.)

I guess I'm revealing my victim-mentality here.  These potentially imagined slights and the real historical persecutions such as Carthage, Haun's Mill, and the forced exodus west, are indeed "stamped into the Latter-day Saints' collective memory," as Jon Krakauer pointed out in his not-so-unbiased account of Mormonism, Under the Banner of Heaven, A Story of Violent Faith.  But for me personally, after living in the South during my formative years, I experienced a certain amount of discrimination from other Christians.  (Additionally, a Big Gulp flying at me from a car window while pedaling a missionary bicycle down the streets of Modesto CA also comes to mind.)

Unfortunately, discrimination based on religious affiliation is one of the last acceptable forms of prejudice.  I've seen it from both sides in regard to Mormonism, (meaning that conservatives and liberals discriminate against Mormons for very different reasons.) In the end, I am more comfortable with the dislike of my faith that I feel from the Christian Right than what I experience from the Progressive Left.

Let me explain: In the Southern Bible belt, Mormons are perceived as weird, cultish and believing in "another Jesus."  While I was in Sunday School learning about the Army of Helaman or watching LDS films like "I'll Build You a Rainbow," the Baptists and Methodists were showing their children "The God Makers," a film that informs young minds that Mormons believe in a very badly animated Jesus.  And the following Monday, these same little children would go to school and inform me that I was brainwashed and that I worship Joseph Smith. However, the accusation that Mormons aren't Christian is easy for me to deal with. ("Blessed are they which are persecuted for my righteousness' sake...")  In fact, this is what Mormons have experienced all along.  But now that I live in the Pacific Northwest, I find opposition to my faith based on completely different reasons: the dislike of Mormons is due to the perceived intolerance of blacks, women, and sexual minorities.   Ultimately, I find it easier to be portrayed as a religion that believes in another Jesus than a religion that oppresses others.

But back to my point, (because I'm not planning on moving back home just so I can be discriminated against differently): I don't believe that the far right of the Republican party should cast too many stones at us Mormons or our faith; one or two small pebbles might suffice. For indeed, we do proselytize to other Christian denominations, and we do believe that God has a body.  But in the end, we are believers.  And for every God Makers movie about us, there is a Jesus Camp about you.  So give us Romney this time, and maybe next time you can have your Michelle Bachman.

But just so I'm perfectly clear: in the end it really doesn't matter.  I am voting for Obama, and you might consider doing the same.
Christians Contributors discrimination mormons Obama Progressives Romney
Do you like this post?
Tweet