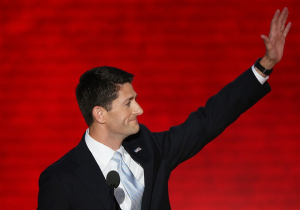 Paul Ryan speaks at the RNC; the only thing we liked about him was the tie he was wearing.[/caption]

Sadly, I must put Condoleezza Rice's excellent speech to the side and take aim at Congressman Paul Ryan's 30-minute roller-coaster ride of soaring platitudes, sharp condemnations, and sad flat metaphors.  I like metaphors; I like to use them, read them, and hear them, but Paul Ryan proved to be a very poor man's Neal A. Maxwell when it came to spinning a yarn and using a metaphor.  (Seriously, his "ships sailing" line came straight out of a worn-out Barry Manilow song.)

That said, the RNC loved the guy.  The cheering and woo-hooing at his speech caused a few light-emitting diodes on my flat-screen TV to blow out.  But really, if we Mormons had any question about Ryan, he settled it with his admission that his iPod playlist "starts with AC/DC, and ends with Zeppelin."  Ever since we attended youth conference in the 1970s, we've all known that AC/DC stands for "Knights in Satan's Service," and that the song, Stairway to Heaven, has backmasking - (For proof, I tried to play it backwards on YouTube, but I couldn't find the reverse button.)

But in short, Paul Ryan's speech was mean-spirited and nasty.  I guess this is the standard operating procedure: the VP nominee is supposed to be the bulldog, while the P nominee is the nice one.  But Ryan's sarcasm and coloring of Obama's message of hope and change as "fading" and "tired" grated on me and affirmed what I already knew: I will not be voting for Paul Ryan when he runs in 2016.  He even took a stab at the youthful electorate who came out en mass to vote for Obama in 2008: “College graduates should not have to live out their 20s in their childhood bedrooms, staring up at fading Obama posters and wondering when they can move out and get going with life.” He also stated that "you have not failed, your leaders have failed you." But these lines do not acknowledge the deception that Romney and Ryan have nothing in their bag of Trix to assist young graduates beyond cutting taxes for the wealthy and slashing government programs that help the poor.

Ryan went on to state that, "none of us have to settle for the best this administration offers – a dull, adventureless journey from one entitlement to the next, a government-planned life, a country where everything is free but us." In saying this, he denigrated the real experience of people in poverty; he somehow believes that utilizing the safety net leads to a decrease in freedom rather than a decrease in suffering for families and children.  Ryan demonstrates this disdain for the poor with his proposed $1.4 trillion cuts in Medicaid.  And to clarify, Medicaid is the insurance for children in poverty and adults with disabilities.  Thus, Ryan and Romney hope to diminish the already-lacking health care program for people in poverty.  Apparently ending Obama's healthcare expansion is not enough for them - he said that Obamacare has "no place in a free country," and I suppose this exposes what Republicans think of our northern neighbors: Canadians, with their socialized medicine, are all lazy slaves under the fetters of a government intrusion in their lives.

So here is my problem with the whole speech: Paul Ryan lies.  I am getting tired of this.  The stories continue about Obama raiding Medicare; I don't even remember hearing this line of attack before Romney picked Ryan, the real Medicare cutter.  But it is a cunning move; if you are weak in an area, then attack your opponent in this same area to cover your own backside.  The $716 billion is an actual cut to Medicare recipients under the Ryan plan, but it consists of cuts to medical providers under the Obama plan.  So now Paul Ryan presents himself as the defender of Medicare, and he even enlisted his "role model" mother as the Floridian face of his plan to save old people. But in reality, he is devising a plan to usher in a new era for our seniors: Vouchercare.

And I am tired of all the "you did build that."  This obfuscates the meaning behind President Obama's original statement, and it pushes American individualism (every man for himself!) to the extremes of ugliness.

The deception doesn't stop there: Ryan used the example of the closure of a GM plant in Wisconsin to illustrate the failure of Obama's policies; he even related how Obama spoke at the plant in 2008 and pledged to work to keep it open.  The part that Ryan did not mention: the plant closed in December of 2008, a full month before Obama's term began.  How can this anecdotal evidence be interpreted as anything but deception when Obama cannot possibly be held responsible for a plant's closure that happened before he took office?

The following are a few more quotations from the VP nominee that float precariously on top of a half-truth or a full-blown lie:

"(Obama's presidency) began with a perfect Triple-A credit rating for the United States; it ends with a downgraded America."  What Ryan fails to acknowledge is his party's and his own obstructionism in getting work done in congress to have prevented this downgrade.

"He created a bipartisan debt commission. They came back with an urgent report. He thanked them, sent them on their way, and then did exactly nothing."  This is misleading because Ryan himself opposed Bowles-Simpson’s report.

Read this report from the Washington Post about the falsehoods in Ryan's speech.  I need to sleep.

But in closing: Paul Ryan posed this question - "Without a change in leadership, why would the next four years be any different from the last four years?"  What Ryan doesn't understand is that we asked for this.  America voted for Obama because he promised us Obamacare.  Obama did exactly what he said he would do, and his has been a presidency of fulfilled commitments.  We don't want Ryan's kind of change, we want the change that Obama promised and has delivered on.  Four years later, it may sound trite, tired, or faded to Ryan, but for us, it is still change we can believe in.