It was an awkward position to find myself in. I knew people would openly embrace any investigator, but I also knew it would be clear to visitors that the vast majority of the ward strongly preferred Governor Romney to President Obama. It was the equivalent of being a BYU fan in a ward full of Ute fans the day after the rivalry football game. Nobody was openly hostile, but it was clear you were wearing the wrong color. There were conversations in the foyer. There were comments in Sunday School. There were overheard jokes and passing references. It would be clear to many investigators that they wouldn’t fit in with the culture.

Many of the things said came from Fox News, Glenn Beck, or the RNC. I was experiencing what many others have experienced, and what Larry Brown discusses in his new book Choosing the "Right": The Rise and Repercussions of Republican Politics in the LDS Church (Amazon). In this book, Brown argues that American LDS Church members’ overwhelming affiliation with Republican politics has consequences, and that not all of them are positive. 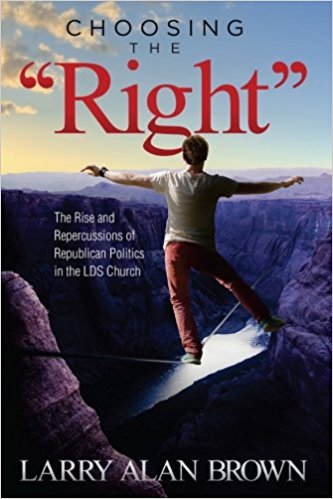 The book is divided into three parts, each focused on a different aspect of this imbalance. First, Brown discusses the historical roots of the Mormon-Republican alliance. He traces the Church’s political leanings from the 1887 Edmunds-Tucker Act (which, passed by the Republicans, resulted in the vast majority of church membership affiliating as Democrats for decades to come) through Ezra Taft Benson’s prominence in GOP politics and Church leadership a time when church membership was steadily migrating toward the Republican Party.

This section also addresses the deep alienation currently experienced by many Democrats in the Church. Brown addresses questions such as “is the gospel conservative?” and “can a Democrat be a good Mormon?” concluding “not exclusively” and “yes,” respectively.

In the second part of the book, Brown devotes five chapters to poverty-related public policy, pushing back against core Republican arguments about the poor. He spends a full chapter on the principle of empathy, including one a compelling story about a “strict conservative” who began to see things in a different light after illness struck his family:

“After telling his story, [the man] said, ‘The limited government thing sounds good in theory. But in real life, there are just too many needs out there. It would be nice if charity could do everything, but it isn’t realistic. There are legitimate needs in our communities that require the collective effort of government. I was cured of my hard-core conservativsm by my experience’” (48-49).

This man, however, is not representative of most members of the Church, as Brown reports that a recent study that found Latter-day Saints to be the “least supportive of public welfare programs compared to all other religions measured” (53). Pushing back against a common counterargument to welfare, Brown points out that while the Savior is clear we are to help the poor, He doesn’t specify our methods: “[d]oes He say it is alright to permit the transfer of our wealth to the needy only through voluntary charity but not through public programs?” (57). Spoiler alert: He doesn’t.

In the rest of this section, Brown addresses the conservative tendency to blame the poor for their poverty, presents numbers showing the factual weakness of claims that the poor just need to get jobs, and discusses the importance of governmental--not just charitable--aid to the poor.

This entire section is full of well-documented research and is a must-read for those interested in practical solutions to poverty. Brown caps the section off with a compelling point about the Church’s institutional support of government welfare and safety nets:

“The examples above are only a sampling of the many causes to which the LDS Church has made significant monetary and volunteer contributions to augment public government funds. While Church leaders emphasize the use of voluntary charity to incentivize self-sufficiency and alleviate as much human suffering as possible, they also realize that it must be combined with tax-financed safety nets to address the growing problem of poverty” (97, emphasis added).

So many charities rely on the government for their funding, and those that don’t end up relying on government funding to augment their own work. Maybe in theory charities and churches could handle everything on their own, but that just doesn’t seem to be a practical solution.

The first part of the book is US history, the second is public policy, and the third is Utah history. In the last group of chapters, Brown methodically walks through the concrete effects, in Utah, of right-wing politics. The results are troubling if not surprising. This section begins with a former Utah state legislator’s claim that “compassionate conservatism” doesn’t exist because, as she says, “I think government can’t be compassionate.” With that backdrop, Brown proceeds to expose the hollowness of Utah’s claim to being the “best run state,” walks through many absurd failings of the state’s Republican supermajority, and summarizes close to two dozen scandals, last-place finishes, and negative side effects that come with a state run for decades by a one-sided Republican supermajority.

Brown ties the whole book together with a chapter titled “The Church Gets Blamed,” in which the chief of staff to former Utah Governor Mike Leavitt agrees that it might not be wise for the Church to continue to be so closely aligned with the far right Utah legislature: “Utah and the Church are often synonymous in the eyes of the people. When nutty things happen in Utah, both Utah and the Church get attribution” (172).

This fact makes Brown’s analysis of Utah politics even more concerning. Brown outlines case after case of Utah political extremism, including Republicans rushing hundreds of bills through at the end of each legislative session to avoid public scrutiny, changes to transparency laws to enable legislators to keep public records secret, ultra-partisan redistricting (even the right-leaning Wall Street Journal called Utah’s 2010 redistricting efforts “a scam”), abuses of power, scandals, personal vendettas toward anyone even related to Democrats, and an outdated convention system that rewards extremism on both sides of the political aisle.

Brown builds the case that the Church is dragged down by its close association with Utah’s Republicans. He points to multiple examples of the Church stepping in and moderating the political extremism — clearly the Church has plenty of sway over Utah politics when they want to (as Brown points out, the Church moved the legislature and public opinion on LGBTQ nondiscrimination, the Utah Compact, allowing gay Boy Scouts, and charity toward immigrants), so when they don’t speak up about something, it seems like they support it at least to some degree. This pins the rest of Utah’s extremist policy and poor results, fairly or unfairly, squarely on the Church.

Throughout the book, Brown is quick to distance himself from the state and national Democratic Party, repeating multiple times that he is not claiming perfection for the Democrats. He also goes out of his way to clarify that he believes Republicans can be good members of the Church, never questioning Republicans’ faithfulness or accusing them of not being good Mormons.

The book is a much needed addition to the conversation about the LDS Church and politics. It should be read by any Mormon Democrat who feels alone in their ward and any Mormon Republican who can’t imagine what Mormon Democrats could possibly be frustrated about.