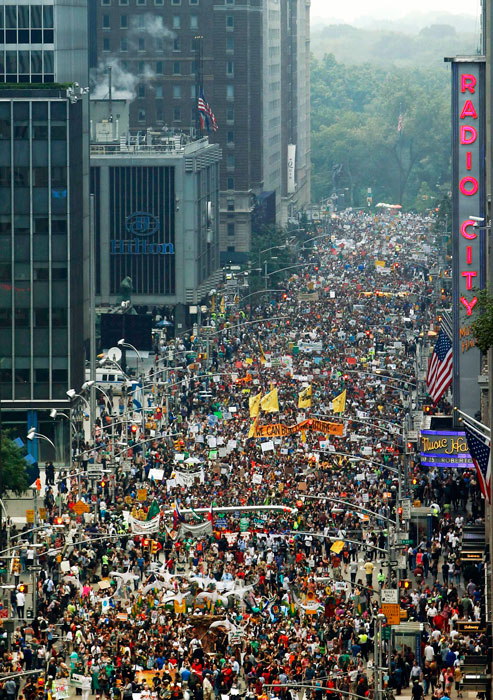 On Sunday, September 21st , 400,000 people stretched across 4 miles of downtown Manhattan to protest the inaction of leaders across the globe to combat climate change.

From the scientists holding an oversize chalkboard to the Hurricane Sandy victims toting life preservers, the march was a self-consciously inclusive affair, with the organizers intent on creating a very big tent, which they hoped would hammer home the relevance of climate change and it’s effects. (Lisa W. Foderaro, New York Times)

As “self-consciously” inclusive as this march was, how many Mormons do you think were in attendance? My guess is very few. Mormon culture tends to view this type of activity as “radical,” and this type of cause as silly or unnecessary at best, or crazy and misguided at it’s worst. No matter how big the tent was in New York on this particular Sunday to include all types of people, it’s highly unlikely one would find many Mormons.

To understand why, it helps to remember the Republican National Convention of 2012. There were many Mormon conservatives who watched that Monday evening, August 30th , to witness their candidate, Mitt Romney, prove he was fit and ready to beat the incumbent, President Obama, in his re-election bid. One of Romney’s most memorable lines from his speech was “President Obama promised to begin to slow the rise of the oceans and heal the planet. MY promise … is to help you and your family.” If you were watching that night, you will remember that, between those two sentences, Romney paused, at great length — and allowed the whole convention to explode in laughter.

Conservatives all over the country relished this line. It fed right into their desire to mock the current president for his forays into healing the environment. But for Mormons, it did more than that. It helped draw the virtual line in the sand that President Obama only cared about liberal causes, while Mitt Romney cares about your family. What could be more central to the heart of a Mormon than the family? Compared to that, no political cause is as important.

The worldwide scientific community has noted that one of the major effects of climate change is more frequent and more severe storms – storms like Superstorm Sandy. What if, instead of facing a Sandy-like storm once every hundred years, we experience that type of storm every five years? What kind of impact will that have on families?  Sandy resulted in between 117 and 182 deaths and over $65 billion in damage.  But the negative effect didn’t stop there.  “Superstorm Sandy packed a bigger economic punch than people had thought,” according to CBS MoneyWatch.  “In its sweep through the Northeast, the storm halted sales at major retailers at the start of the crucial holiday shopping season, closed factories and slowed home sales in one of the most densely populated areas of the country.”  Families dependent upon retail jobs, factory jobs, or construction were hit hard.  Those are REAL impacts on REAL families.

There are times when liberal Mormons will ask conservative Mormons a question such as “aren’t you concerned about the welfare of the planet? Aren’t you worried how climate change could affect your children or grandchildren if it impacts their business or their health?” and the response will sometimes be “No, I’m not concerned, because by then, the Second Coming will have occurred.”  How is that different from “Eat, drink and be merry, for tomorrow we die?” By that logic, some would say we should all get drunk every night, shoot heroin, and sleep around, because, hey, the Second Coming will happen and make everything better.

And yet, there are many comments from church leaders over the years regarding the stewardship responsibilities we have for the earth. Russell M. Nelson said that “we should care for the earth, be wise stewards over it, and preserve it for future generations.”   Ezra Taft Benson suggested that “we are morally obligated to turn this land over to those who succeed us – not drained of its fertility but improved in quality, in productivity, and in usefulness for future generations.”  Even Brigham Young told us that “our Father in heaven wishes us to preserve that which he gives to us … It is not our privilege to waste the Lord’s substance.”  We’ve been advised many times to be stewards over the earth that the Lord has provided for us … to take care of it, and preserve it for future generations -- OUR future generations, OUR families.  Members of the church need to realize that climate change will affect OUR FAMILIES, and they need to support policies that will help maintain the same world that they have enjoyed, so they can pass on a healthy planet to their progeny.

Redman, Janet. “While We March for the Climate, Governments Meet with Polluters.” The Institute for Policy Studies . 19 Sept 2014.