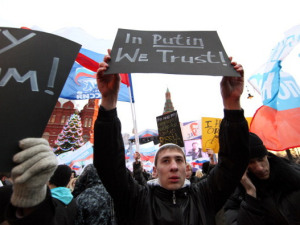 Surprisingly, I have actually been feeling a bit neglected.  During the election I expected to see several new Mormon-themed articles posted online daily; some of these articles even included references to Mormons for Obama.  So I found myself feeling slightly pleased to hear two NPR stories referencing Mormons this morning.   The first is pretty run of the mill: Mormonism: A Scrutinized, Yet Evolving Faith.  However they do interview Joanna Brooks, and she is always a pleasure to hear.  (And I would also add, anything is better than hearing more about the Petraeus sex scandal.)

But the second article is something to be excited about: In Russia, Pro-Putin Youths Protest Mormons As 'Cult'.  But it's not the subject of the title that's so interesting (or the most absurd.)  The protesters (the Young Guard) have staged a number of protests outside chapels in Russian and "charge that the Church of Jesus Christ of Latter-day Saints is a 'authoritarian sect' with connections to the CIA and FBI."  They cite evidence that Mormon missionaries go on to work for the CIA and FBI in disproportionately high numbers.  This is something that we Mormons have understood to be the natural result of the wide-ranging international experiences and language skills our returning missionaries acquire, but apparently these Russian Young Guard members interpret these (non-validated) statistics differently.

Indeed, the Youth Guard "sees the Mormon Church as an American enterprise, funded from the United States, with missionaries who act as American operatives."  Yes.  They believe that Mormon missionaries are American spies.

As the NPR report ended this morning, I found myself encompassed by a gentle mist of nostalgia for the Cold War.  Not for the Cold War itself, but more for its influence on our popular culture.  I mean, who doesn't miss the days when Red was associated with the words Hunt, October and Dawn (the Patrick Swayze one,) instead of Bull, Box, and Dawn (the Connor Cruise one.)  So thank you Russian Young Guard for hosting 80s-themed dance parties outside our LDS chapels in Russia.  This must be a wonderful history lesson for your young people, and I am sure Sam Mendes will be contacting you for ideas for his next Bond film.