Mormons for Obama on ABC

Posted on Blog · July 22, 2012 9:05 AM
Welcome to those of you who are visiting our site after reading Kyle Blaine's piece on abcnews.go.com.

A little about us: as stated in Blaine's article, we are not affiliated with the Church of Jesus Christ of Latter-day Saints nor the 2012 Obama Presidential Campaign.  However, we are Mormons, and we are for President Barack Obama.  We created this website in order to represent the unique perspective of Mormons who are voting for Obama.  We are all active and believing Latter-day Saints in Seattle WA, Provo UT, and Washington DC.  We are not necessarily Republicans or Democrats, and we are not anti-Mitt Romney, but we are united behind President Obama as he seeks his second term.  For more information on the idea behind this site, read our first post here.  Also, if you are a Mormon who supports Obama and have something to say, we are looking for submissions - so submit here!  Thank you for visiting! 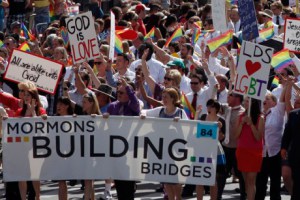 So ultimately, I don't believe that MormonsForObama.org sets about to "(expose) the internal stresses and fractures that have long existed within the (Mormon) faith." Mostly, we decided to put this website together because we didn't want others (or Romney's campaign) to define who we are as Mormons.  But apparently in doing so I have now been defined.  I've become a progressive Mormon (or an intellectual or a feminist?)  However, I don't think that I neatly represent any of those terms.  I am just a Latter-day Saint who is voting to reelect President Obama in November because I believe that he will be the best leader for our nation.