The Age and Place of the Gifted Pickle Sucker

In an address to BYU students, then-Elder Gordon B. Hinckley relayed the following story:

“Recently I spent the better part of a week in Washington, D.C., living in a hotel room. Each morning I watched the early news on television and then read the morning paper while eating breakfast... The amount of venom that spewed from the mouths and pens of the commentators was unbelievable. They were aflame with indignation. In all that week of morning watching and reading I never heard nor read among the commentators and editorialists a single paragraph of positive thought. The speakers were brilliant. They were men of incisive language, scintillating in expression. The columnists were masters of the written word. With studied art they poured out the sour vinegar of invective and anger, judging as if all wisdom belonged to them. At the conclusion of that week, I too made a negative observation. Said I, ‘Surely this is the age and place of the gifted pickle sucker.’” 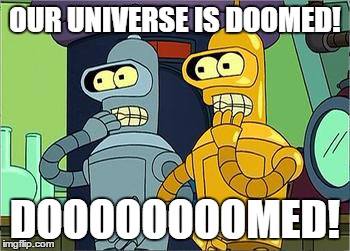 There was one sentence I removed from the story that I wish to address now. The cause for the venom spewed from the mouths and pens of commentators, as Elder Hinckley put it was this: “President Ford had just granted a pardon to his predecessor.” The year was 1974. But aside from the mention of Nixon’s pardon by President Ford, this description laid out by Elder Hinckley could be made in the present day and be equally applicable to cable news commentators, journalists, and bloggers.

While this isn’t a phenomenon identifiable with one particular ideology, I think it’s hard to deny that certain entities within the media have turned doomsday prophecy into something of an art form. Consider the recent effort by the United States and six other nations to strike a deal with Iran. The GOP and political right have been in lockstep opposition to President Obama’s efforts to hash out a deal with the Islamic Republic. Their efforts of opposition crescendoed with the one-two punch of Speaker John Boehner circumventing traditional channels and inviting Israeli Prime Minister Benjamin Netanyahu—an outspoken critic of the deal with Iran—to speak before a joint session of Congress without consulting the White House first, and 47 Republican senators signing a letter to Iran’s leadership stating that, without Congressional approval, any deal authorized by the Obama administration could be easily undone by a future president.

To hear critics of the deal tell it, the deal supported by the Obama administration not only puts the security of the United States at risk, but the security of the world. The deal doesn’t hinder Iran’s ability to develop a nuclear weapon, in spite of what President Obama says—it accelerates it. Never mind that Iran has been on the brink of developing a nuclear weapon within one or two years, for the past 30 years.

Before President Obama was reelected, there were many nay-saying soothsayers predicting not only the decline, but the utter destruction of the United States if our number of presidents didn’t bump up to 45. According to Senator Mike Lee (R-UT), gas was on track to hit $6.60 per gallon. Then-GOP presidential candidate Newt Gingrich took things a step further and suggested that if President Obama were elected to a second term, $10 gallons of gas were a possibility. Failed GOP presidential nominee Mitt Romney suggested that the unemployment rate would remain over 8% for the duration of Obama’s second term. The stock market was supposed to crash. And Rush Limbaugh prematurely declared the United States dead should Obama be reelected, stating that the “economy is going to collapse”.

Reality, however, paints a much different picture. As of April 2015, gas prices are on average below the $2.50 per gallon Gingrich campaigned on. The unemployment rate has dropped below 6%. Stocks are doing well. Although the recovery from the Great Recession isn’t as robust as everyone would like, the economy is growing.

Following a fear-based report on Ebola by a FOX News host, PBS correspondent Miles O’Brien said, “I wish everyone could take a deep breath, and take a break from trying to pull viewers in by scaring them and that’s what we’re seeing here. It borders on irresponsibility when people get on television and start talking that way when they should know better. They should do their homework, and they should report in a responsible manner. Unfortunately it’s a very competitive business we’re in, and there is a perception that by hyping up this threat, you draw people’s attention.” While O’Brien’s comments were directed toward Ebola reporting, they’re equally applicable to the concerns Elder Hinckley raised. Anger and fear of those who are different or hold conflicting beliefs are frequently used for hype and to draw people’s attention. Worse, the “sour vinegar of invective and anger” is found within the membership of the Church, at both the professional and armchair critic levels, with people “judging as if all wisdom belonged to them”.

This isn’t to say that there is no room for criticism. Criticism is a healthy part of our political dialog. Said Elder Hinckley, “I am not asking that all criticism be silenced. Growth comes of correction. Strength comes of repentance. Wise is the man who can acknowledge mistakes pointed out by others and change his course. I am not suggesting that our conversation be all honey and blossoms. Clever expression that is sincere and honest is a skill to be sought and cultivated.” The problem arises when certain outlets or individuals use their influence to create a culture of anger, hate, and fear.

It seems easier to live avoid the anger and invective when those we agree with politically wield power. Even now, with a Republican-held Congress, it can feel (somewhat) less frustrating since Democrats retain the White House. It’s easy to see the anger coming from the other side, and we’ve been exposed to so much of it over the last six years. But come 2016, 2020, or some time beyond, Republicans will take control of the White House. Political power in Congress will switch back and forth. Elder Hinckley said, “You are partakers of the gospel of Jesus Christ. The gospel means ‘good news.’ The message of the Lord is one of hope and salvation. The voice of the Lord is a voice of glad tidings.” As ambassadors of the wedding of Mormonism and liberalism, we would be wise to heed the words of our beloved late prophet. We can and should be critical of current and future political leaders whose policies we believe do not lead the United States toward a brighter future, but we should do so without the bitterness that we so frequently see directed toward President Obama and other liberal leaders. In doing so, we can avoid becoming the bitter “pickle suckers” Elder Hinckley described.