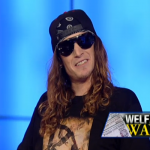 As any viewer of Fox News will tell you, America has become an entitlement nation. This claim is reinforced by example after example of individuals gaming the system or dissected across Fox’s political theater. The right’s fixation on the poor has become so blatant Fox has even come up with a pseudo-correspondent that fuels the misleading perception. Jason Greenslate, or “Food Stamp Surfer”, has been remarkably effective reinforcing the narrative of widespread welfare abuse. In fact, he was even mentioned by Representative Tim Huelskamp (R) on the House floor before a taking a food stamp vote, "You can no longer sit on your couch or ride a surfboard like Jason in California and expect the federal taxpayer to feed you." Hmmm. I’m guessing Representative Huelskamp missed the irony.

The Republican grab bag of anecdotal examples is very effective in creating a “poor are lazy” perception. To many on the right, those who take advantage of entitlements or welfare services are parasitic or morally deviant. This unabashed stereotype is important when justifying their political ideology: Democrats want everyone to live off the government, Republicans want individuals to succeed driven by personal motivation which handouts undermine.

The problem with such logic is demographics paint an entirely different picture of welfare recipients. Did you know that half of food stamp expenditures benefit children? Or that one in five veterans take advantage of the program? Did you know that food stamps represent a minuscule 1.8% of our federal budget or that food stamp fraud accounts for less than 5% of the total program? Such information might change the perception of voters about the role of government which is why “Food Stamp Surfer” becomes the poster child of the Fox News repertoire. Collective data is not personal and unpersuasive. You might not know any of the millions of children and veterans that are supported by welfare but you do know your aunt’s best friend’s sister is sporting a $500 iPhone paid for by the government.

GOP: Dear Kids, 50% of all food stamps go to you. Work harder and stop being moochers.

Misinformation about our Nation’s entitlement programs (Welfare, Medicare, and Social Security) is equally exaggerated. Even the word “entitlement” conjures negative connotation driven by ignorance and misunderstanding. Many Conservatives are enraged 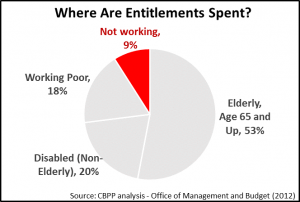 So what of the remaining 9% able-bodied freeloaders drawing entitlements? Let’s hang them. I’ll get the tar, you get the feathers. But let's be careful, in our haste to enact fairness and justice we might be punishing a demographic that has equal need for taxpayer’s help. There are thousands of students that are attending colleges and universities while trying to support families. Many are studying for high earning careers as dentists and doctors, easily returning the entitlements being invested today. Even if we do conclude the 9% are actual moochers like Jason Greenslate, we should still resist the urge to throw the baby out with the surfer.

When addressing the growing expenditures associated with the rising baby boom population, little has been proposed by either party. Instead, partisan rancor has been unleashed and misdirection has become the norm. I have several friends who openly blame President Obama for the escalating debt and the growth of entitlement spending behind Baby Boomers. This is incorrect for three reasons: 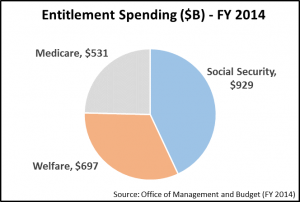 Even President Obama’s signature legislation, Obamacare, is deficit neutral (CBO) offset by mandates and penalties with no impact to our deficit.  Where our anger should be directed is government’s inaction, as the last major change to entitlements was the 2003 Prescription Drug bill. We should be holding the House of Representatives accountable, since the Constitution dictates laws originate in the lower chamber, to generate common sense bipartisan solutions. But herein lies the problem for the GOP-led House. Any changes to entitlement programs that do not include Medicare and Social Security reform are a wasted effort and any successful change will anger core constituents. Trying to repeal Obamacare 50 different times is a much safer play for House members interested in keeping their jobs through the next election cycle.

All spending bills must originate in the House. So when the GOP is complaining about Obama's productivity, please ask what they are doing. — Matty Ice (@MattyIceAZ) May 27, 2014

Even if undermining entitlements fosters partisan opportunities our problems are not disappearing anytime soon. I’m sure my Libertarian friends would suggest a free-market solution. Remember when Medicare was passed in 1965? Only half of our nation’s elderly had healthcare and costs associated with medicine were skyrocketing. The Sixties’ free-market solution was basically a Darwin-driven model. Can you imagine being a 55 year old senior looking for healthcare coverage after being dropped by your company’s insurer upon retirement?

How about charities? Can they fill the void? Based off of IRS data charitable giving (currently $300B) would need to increase three-fold to cover current liabilities. This also assumes every donation dollar is appropriated against entitlements; not building churches, saving rhinoceroses in Africa, or giving to one of Karl Rove’s SuperPACs.

Regardless of any proposed solution the very first step in delivering lasting reform is awareness. Data has become the newest inappropriate four-letter word being replaced with trivial anecdotal examples. But I get it, fully understanding issues takes effort and who wants to waste their time when partisan blogs are like crack to drug addicts (just slap "liberal" on this post so the right can disparage the content).

We need to avoid assuming our best-friend’s cousin scheming the welfare system is representative of millions of Americans looking for help. As Jon Stewart said recently, stop looking for the elusive “Welfare Bigfoot”. Start looking across the street, recognizing that single mother struggling to provide for her child, and be thankful we are in a much better place. Once we understand who it is we are helping, the solutions will become more clear.

When the GOP says entitlements are for the lazy, they are talking about seniors and the disabled where 73% of our entitlement spending goes.

Interested in what our government spends? Here are the topline 2014 Total and Welfare budgets.