The Importance of Agency

This is the first in our five-part series titled "Mormonism, Agency, and Politics." In this post we will discuss the importance of agency in Mormon doctrine. In the second we will address Satan's strategy of limiting our agency. In the third, we will address the view that agency can be restricted simply by restricting freedom. In the fourth, we will examine the idea that agency can be restricted by removing differences between good and evil and explore its political implications.

There are few topics in the teachings of the Church that are as central to Mormon doctrine as agency. Our agency is one of the very few things we had in the pre-earth life that we brought with us into this life, and is one of the most important for our eternal progression:

As this verse teaches, Mormons believe that we are here on earth to learn to choose for ourselves between eternal alternatives. If we couldn't make our own decisions, learning from our weakness and our mistakes, then we would never be able to grow or progress. And that is a path to misery.

Because the gospel is less about knowing or doing than it is about becoming, agency is of utmost importance. If all we had to do was complete a list of tasks, it would be enough to mindlessly jump through the hoops. But that's not enough: we have to actually become something. And that requires agency. 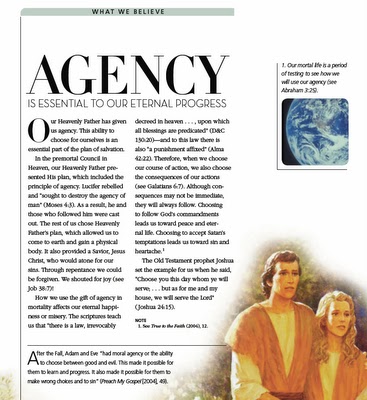 So, what is agency? Our choice between eternal life and eternal misery, laid out 2 Nephi 2:27, suggests that our agency is more substantive and eternal than a simple freedom to choose. If agency were nothing more than freedom, then anything that limits our freedom in any way would run counter to God's desires. Gravity--which limits our freedom to fly--would be against God's plan. More close to home, every parent who grounds their child would be acting in opposition to God's will. Of course, neither gravity nor grounding limits our agency. If agency were that easy to limit, every prison, set of handcuffs, straightjacket, locked door, safety harness, rule, regulation, fence, wall, barrier, and limitation would grant a victory to Satan. And we know that can't be true.

So, if agency isn't simply freedom, what is it? Another verse in 2 Nephi gives us a good answer: