The Theory of Evolution

The next several posts on Mormons for Obama will address President Obama's support for marriage equality.  This is the first in the series.

Two weeks ago, President Obama stated his support for marriage equality while conducting an interview with Robin Roberts of ABC, and he described his position on the matter as having undergone an evolution over time. Of course, many have speculated that he has supported for gay marriage for a while now, and President Obama admitted that his announcement of support was spurred by VP Joe Biden's comments several days before that he supported gay marriage.

And while this allows many the opportunity to shout out an "Amen," others might find themselves in the midst of a Mormon conundrum (as Cynthia L of By Common Consent so aptly pointed out.) The Church's stance on gay marriage is pretty clear, and it's laid out in The Proclamation on the Family, (any guesses when this will be canonized?) and further affirmed through the Church's campaign for Proposition 8 in California in 2008. 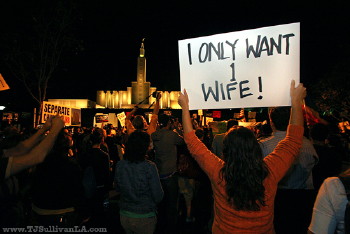 However, this is where things get a bit murky - because while the Church's position on gay marriage is very clear, many were surprised by the aftermath that followed Proposition 8: a movie, protests, and a trail of disaffected Mormons who were confused as to why the Church chose to get involved in the issue in the first place.  The protests even reached Seattle, where about 40 people lined up outside the Stake Center in the U District at 8 am to protest; it was Stake Conference that day, so they had to wait two hours before anyone showed up, but their point was not misunderstood.  Like a blind-sided contestant on CBS's Survivor, they were shocked and outraged that a church would organize a campaign effort of this sort.

Although the Church was not the one that began the campaign for Prop 8, the Church has been actively opposing gay marriage for some time and has participated in past campaigns in Hawaii and Alaska.  The "story" is that the Church was courted to participate by Catholics and conservative inter-faith groups.  (Apparently, this is the only time these Christians have need for Latter-day Saints; Mormons are excellent at organizing: think of moves by the Elder's Quorum, casseroles for new mothers, and visiting teaching.  Otherwise the Church is kept at a safe distance seeing that it is a cult.)  But after having been invited to the party, Mormons ended up providing the cake, ice cream, and crepe paper decorations, and ultimately they were left to clean up the whole mess after all the party-goers left for home - and this included more than a few broken windows, lost jobs, death threats, and incidents of vandalism.  (However, I should point out that these interfaith groups did take out a full page ad in the NY Times to ask the gay rights groups to be nicer to the Mormons.)

But this did not signal an end to the issue for Californians or the Church.  The Prop 8 court battle continues, and other states (North Carolina) are amending constitutions, passing laws, and seeking signatures for referendums for ballot measures.  Currently Washington State and Maryland are both facing possible referendums, and Washington State's anti-gay marriage contingent have almost enough signatures (121,000) to get its Referendum 74 on the November ballot.  (Ref 74 essentially is Senate Bill 6239, that was passed by the Washington State Senate and Legislature, and signed by Governor Christine Gregoire on February 13th, making marriage available to all in Washington State. Ref 74 will put this bill to the people for approval or rejection.)

I've heard from several Mormons in Washington who are concerned that the Church might organize around this referendum as they did with Prop 8 in California.  Clearly the Church is still watching the Prop 8 battle play out and has periodically issued statements like check point markers along the way.  The heart of the Church's argument against gay marriage is the doctrine of the eternal nature of families.  However, the Church and other conservative groups have justified their opposition to gay marriage because of fears that their religious organizations will be required to provide same-sex marriages and adoption services to gay couples; (see this article on NPR for examples.) The WA state marriage equality bill has provisions that will not allow this.

But as far as Washington goes, the Church may be sitting this one out.  There are some reports that letters have been read over pulpits of some wards in WA and Maryland, and that (once again) the coalition to disapprove Ref 74 has reached out to local LDS leaders.   However, the broader Church leadership seems to be staying silent.  Considering the time, money, and energy invested in passing Prop 8 by the local and Salt Lake leadership of the Church, some people expected to see a similar thing happen here in Washington as well.  But alas, the Church seems to have evolved in its thinking in regard to its political participation in this issue.

Some may say that this might mean that the Church is realizing it was wrong in its approach to Prop 8, but I wouldn't go that far.  All of its statements regarding the campaign in California are on LDS.org, and Elder Oaks defended the campaign in a speech in 2009 at BYU-Idaho that further stoked the fires of discontent for civil rights activists.  However, in a Time magazine article, Elder Quentin Cook is quoted as saying, "talking about what may or may not happen in (future campaigns) would be speculation, and I  wouldn't want to do that."  The article goes on to quote David Campbell, a Mormon University of Notre Dame political scientist: "If it appeared that the  church sat out next time because it was criticized this time, there might be a credibility question. (But) does the church want the public to identify it primarily as a political body opposing an issue that comes back again and again?"  Read full article here.

Regardless of what the Church decides to do, this evolution is happening all over.  While, some Mormons have been rallying around this issue for some time, (see MormonsforMarriage.com,) others are changing more slowly. (Side note: some Mormons are even participating in Seattle's Gay Pride Parade to show support for WA's equality law. See article here.)

Jim, a commenter on Joanna Brook's article on religiondispacthes.org, wrote: "...At first I was nervous because I thought my views were moving me out of line with the church's teachings. I worried a lot about reconciling what I felt led and inspired to believe with the teachings of leaders of the church, but as my heart changed, I kept finding other faithful members of the church growing in the same way I was. They were Sunday school teachers, young women leaders, bishops and stake presidents."

The evolution of thought around this issue is happening slowly in some arenas and quickly in others.  Even Jay-Z (a rapper!) came out in support of marriage equality.  President Obama's position has evolved, and Gov. Christine Gregoire of Washington State describes "the evolution of her personal views" to explain her support and promotion of the bill to legalize gay marriage in Washington State.

The Mormon position is evolving as well - and maybe this is happening more individually than collectively.  How this plays out this summer in Washington and Maryland, is anybody's guess, but I imagine that most of the meeting house pulpits will stay silent on gay marriage. (And many in the congregation will breath a sign of relief and wipe the anxious sweat of dread off their brow.)  And hopefully, all of this evolving Mormon good will towards and in behalf of the rights of others will have a pleasing effect on the church collectively, if not just individually.
mormons Contributors gay marriage
Do you like this post?
Tweet