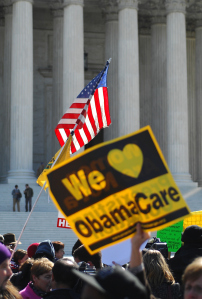 (March 27th, 2012) Hundreds of activists gathered in front of the Supreme Court building to rally and show their support for the Affordable Care Act during the second day of hearings regarding the law. ~ Washington, DC ~ Photo by William Melton Jr. / SEIU[/caption]

The 110 page ruling by the Supreme Court largely upholds the Affordable Health Care Act, including the individual mandate.  And Chief Justice John Roberts cast the deciding vote based on the understanding that penalizing people for not having health care is a tax.This is a victory for President Obama and a victory for all of us, including our fellow (conservative-leaning) Americans who somehow don't know a good thing when they see it.

This will signal a shift in the election 2012. Many people will begin to look at Obama and the healthcare law differently now that this is decision has been handed down. Republicans will paint it as a tax, but the President will be able to claim a victory - and the implied insult of calling it Obamacare will fade and diminish, and this supposed pejorative will ultimately give President Obama the credit he deserves.