Why Pulpits and Politics Don't Mix 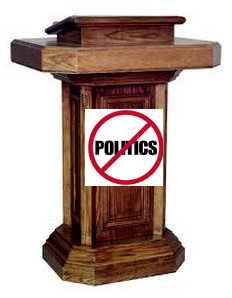 A few minutes ago, the Salt Lake Tribune published an article written by Peggy Fletcher Stack about a Utah Stake President who delivered a passionate, semi-political talk over the pulpit. You can read the article and text of the talk here.

The talk is controversial because while he does not name any candidates, political parties, or ideologies by name, he states that Americans voted for socialism back in November and cites the passage of gay marriage legislation in many states as a signal of the earth becoming more wicked. These comments are viewed by many, not just liberals, as inappropriate to be spoken from the pulpit, let alone by a stake president.

The LDS Church’s official stance states that it does not “endorse, promote, or oppose political parties, candidates or platforms.” While this stake president did not, as previously mentioned, name any candidates or parties, he did repeat many of the most well known talking points of the Republican Party, echoing statements proliferated by conservative pundits and party leaders.

Defenders of the stake president’s talk claim that he was well within his rights as stake president to warn against societal changes he feels are dangerous. But when did we become so focused on the application of principles that it became necessary to dictate how people should respond to various social causes? When did we, in The Church of Jesus Christ of Latter-day Saints, stop talking Jesus Christ and his simple, profound teachings and start spending our time talking about the UN Ambassador and the Director of the CIA? When did “the handing out of birth control” become an appropriate target to malign during a Sunday service (or ever)?

Everyone has stories of a new investigator or convert who said something unusual in a talk or testimony, something that demonstrated that individual’s either ignorance of social norms in the LDS Church or determined non-conformity. But stake presidents, when delivering an address over the pulpit, should know better than to exploit his opportunity to speak from a position of power in order to express his feelings on political matters instead of expounding on the gospel of Jesus Christ and doctrine of the LDS Church.