Win One For the Flipper 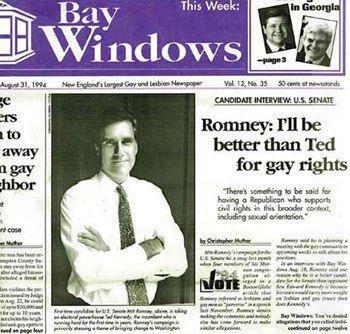 This is the fourth post in a series on Obama's support for gay marriage.

When Obama announced his support for gay marriage, the conservative talk shows accused him of being political - they said that he only supported gay marriage because it would help him win votes in the election.

And maybe this is true?  According to a Huffington Post article, Obama expressed support for gay marriage back in 1996.  (He was for it before he was against it, and now he's for it again.)  As Joseph M. pointed out in his post, The Theory of Evolution, Obama said that he was now supporting same-sex marriage because his position has evolved.  But I disagree on this point - it seems that Obama is being disingenuous when saying this.  It seems like he has supported gay marriage all along, but in 2008, he said he only supported civil unions because gay marriage was considered unpopular.  Now as the climate changes, is it possible that Obama's support of gay marriage is because popular opinion is shifting?  Even Jon Stewart asked the question, "What happened?" and then proceeded to offer his own answer: "He became a politician."

But in this election, Obama is not usually associated with the flip-flop.  That usually is Mitt Romney.  So what about Governor Romney?  While his stance on gay marriage has been unchanging, his position on gay rights has seemed to shift overtime.  When Romney ran in Massachusetts for the Senate seat against Ted Kennedy, he did an interview with The Bay, a gay newspaper, and expressed support for gay rights.  Now in 2012, while running for president, he is trying to stay quiet on the subject.

However, because of Obama's recent announcement of support and the allegations that Romney participated in gay-bashing as a young man, the subject keeps coming up, and Romney is forced into answering questions about his position.  Check out this website for a review of Romney's positions over-time.  Interestingly, back in Bush's 2004 reelection campaign, the gay marriage issue seemed to nail the coffin shut for the Democrats - although after the election was over, Bush never said anything about the marriage amendment to the constitution again.  But now, only eight years later, support for traditional marriage doesn't seem to be a winning issue for Republicans.  (And we know that Romney doesn't take a pro-position on any issue that isn't "winning.")  However, one cannot be certain that gay marriage is a winning issue for Obama either.  If this was so cut and dry, Obama might have come out in support of gay marriage sooner - before he was pushed into it by Biden's preemptive statement of support.

Well, where does that leave me?  I support Obama because I feel like he is heading in the right direction on all major issues.  I believe he is heading in the right direction on gay marriage as well, regardless if he was for it, then against it, then for it again.  The general direction of his campaign is where I would like to see our country go.  I know that this may be a difficult issue for some Mormons, but ultimately, gay marriage will be decided by the states.  Also, with all the flip-flopping and federal inaction on this issue, why should gay marriage ever majorly factor into someone's vote for president?  Additionally, when looking at the big picture of Obama's last four years as a whole, he has consistently provided excellent leadership and has brought dignity and integrity to his office.  For this reason, he gets my vote in 2012.
gay marriage Guest Contributors Obama Romney
Do you like this post?
Tweet