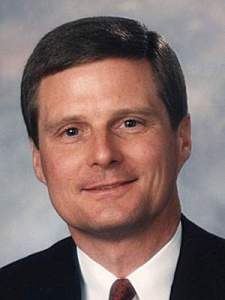 . He frequently gets mistaken for Elder Bednar.

2. Unlike Elder Bednar, Roberts knows how to smile with his eyes.

3. In 1998, he petitioned the Supreme Court in behalf of several rerun television series -  and these were amazing T.V. shows such as Hart to Hart, T.J. Hooker, and Who's the Boss?

4. Roberts has been the focus of a lot of crazy conservative criticism: he was called "the worst part of the Bush legacy," and someone hacked his Wikipedia page to declare him "the 17th Chief Traitor." Additionally, Glenn (nobody misses you) Beck is selling T-shirts calling him a coward.  But despite all this, Roberts has kept good humor about him.  In explaining that he would be out of the country in Malta for two weeks teaching a class, he said, "Malta, as you know, is an impregnable island fortress. It seemed like a good idea."

5. He is way more attractive than Ginsberg... and... well, Ginsberg.

6. His ruling proved a little too confusing for those at FOX News and CNN - (he didn't accept the individual mandate based on the commerce argument, but accepted it as a tax) - and these esteemed news organizations reported that the individual mandate was ruled unconstitutional before realizing they'd got it wrong.  FOX (see below) condescended to look to SCOTUSblog.com to get their information, since their own correspondents couldn't process what they were reading.  I love it.

7. Now that Healthcare Reform is a reality, Rush Limbaugh will leave the country!  (He said he'd go to Costa Rica... which, uh... has socialized medicine.)

8. Justice Roberts has given Romney the phrase that pays: the healthcare law is a tax! Except this maybe a hard argument for Romney - because if Obama is raising taxes on Americans by enacting healthcare reform, then what did Romney do back in Massachusetts with virtually the same plan?

10. His decision validated President Obama's first term in office and cleared the way for the expansion of healthcare - a hope and dream of mine for a long time now.