The Fallacy of Earning: Korihor, Martin Luther, and the Christless Imperative

Taking Korihor as our model, the anti-Christ’s tenets are threefold:

First, obviously, that there is no Christ and no atonement for the sins of man. The other two, however, are surprisingly materialist statements, which are frequently employed today as political rhetoric: that every man prospers according to his genius, and whatever a man does is no crime (Alma 30:17).

In a land governed by laws under the stewardship of elected judges, Korihor accuses the high priest (who not-insignificantly happens to be the chief government official over the land) of putting the people in bondage, denying them their rights and privileges, and preventing them from making use of that which is their own. (Alma 30:27-28) Essentially, the core doctrine of the anti-Christ is an individualistic argument in favor of unrestrained exercise of private property rights. How, though, does such an argument have any relation to, let alone serve, Korihor’s anti-Christology?

Recently, my ward had a conversation about Doctrine and Covenants 42:29: “If thou lovest me thou shalt serve me and keep all my commandments.” We were told that “shalt” was used as an imperative, and therefore “keep all my commandments” is a special mandate in itself to those who love Christ, the god who gives every revelation in D&C. It seemed unnecessary to me to interpret “shalt” as a mandate, rather than a simple future used to predict resultant events, since as commandments, all are already obligated to keep them. I raised my hand and suggested as much. My argument was dismissed (not unkindly) by the good brother teaching the lesson, and we proceeded with a lesson about displaying our love for God through meticulous, scrupulous attention to detail – if we love God, we must not commit a single, solitary sin.

I remained unconvinced, however, and feel firm in my belief that 42:29 is predictive rather than prescriptive. Authoring a blog post in service of my objection to this lesson may seem pedantic to the point of being contentious, and I must be clear that such is not my intent: the leader who gave this lesson is a good and inclusive man who has advocated for the unity of the ward in ways that have earned my respect and admiration. If I simply disagreed with the factuality of his position, I would leave it alone. However, rejection of the imperative interpretation of this verse is essential to our acceptance of the Atonement. 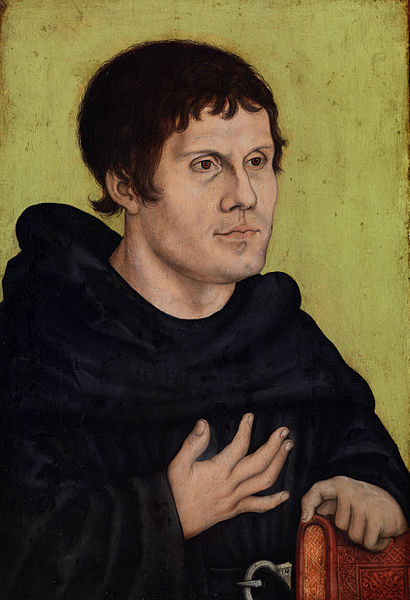 As a young Augustinian monk, Martin Luther found himself devoting ever-increasing time and energy to the purgation of his sins. He went to confession several times daily in an effort to rid himself of every possible wrongdoing that might be laid to his charge. He discovered that, rather than salvation, his scrupulosity yielded faithlessness and despair. His yoke grew ever-more cumbersome and his burden heavier. His meticulous spiritual hygiene, rather than displaying his love for God, robbed him of it:

“I was myself more than once driven to the very depths of despair so that I wished I had never been created. Love God? I hated him! ... I lost touch with Christ the Savior and Comforter, and made of him the jailor and hangman of my poor soul.”

The story of Luther’s growing hatred for God gives lie to the interpretation of 42:29 that makes “shalt” an imperative: it is clear that, quite the reverse, meticulous policing of minutia may destroy the love we hold for our Redeemer.

One need not be a formal student of history to know that Luther reconciled his relationship with Deity. He came to the conclusion, as did the eponymous progenitor of his monastic order, that we may not win our salvation through the elimination of each of our sins: rather, we must eliminate sin itself from our being.  Allowing for some differences from men of different centuries and denominations, the views of Luther and of Augustine of Hippo are consistent with those of the Book of Mormon: that each of us born into humanity bears the self-centered weakness that accompanies the flesh, and that we do not have the capacity to overcome that weakness of our own volition. Rather, it is through the Grace of God that salvation comes – not through our effort, our works, but through our acceptance of our own nothingness and the goodness of Christ.

The well-known scriptural phrases “fallen and carnal” (from the Latin carnis, meaning of the flesh) and “natural man” (from the Latin natura, meaning “birth” [hence Christ’s nativity]) denote the fallenness that accompanies individuation through embodiment. Embodiment, then, is a gift according to our faith tradition, but it is also the root of sin and temptation. Rather than individual sins, sin itself is inherent to our being, and we cannot escape it on our own. The individual cannot, contrary to Korihor’s assertion, conquer according to his (or her) strength. We are all sinners, and to suggest that we can make ourselves otherwise is the acme of pridefulness. Our only hope lies in our willingness to surrender that corrupted self and to become one with Christ, that very God who, according to Abinadi, conquers the weakness of the flesh through the strength of His spiritual will. (Mosiah 15:1-8)

D&C 42:20 bears more than a passing resemblance to the words given in the Book of Mormon by Jacob as well as by King Benjamin, which describe the transformation of the soul wrought by the Holy Ghost when we accept God’s grace. In each case, contrary to Korihor’s position that men should make use of that which is their own, we read (both predictive and prescriptive) that we will give all of our excess to the poor and the needy, our hearts purged of the burden of lust for worldly property. Jacob, condemning the people for their costly apparel and prideful sense of superiority, writes

“…Before ye seek for riches, seek ye for the kingdom of God. And after ye have obtained a hope in Christ ye shall obtain riches, if ye seek them; and ye will seek them for the intent to do good—to clothe the naked, and to feed the hungry, and to liberate the captive, and administer relief to the sick and the afflicted.” (Jacob 2:18-19)

The people of King Benjamin, who humbly acknowledge their carnal state as less than the dust of the earth, beg for their hearts to be changed and are redeemed. They are awakened to their own nothingness, rid of any sense of entitlement or earning, and relieved of the burden of corruptible self that accompanies mortality. Benjamin tells them that in coming to knowledge of God and of the atonement, they will lose desire to injure one another, and that they will succor those in need of succor. (Mosiah 4:1-16) Likewise, D&C 42:30-34 equates love of God with consecrating all excess property on behalf of the poor and needy, that the abundance of some will supply the want of others.

Fundamentally opposing Korihor’s assertions of individual strength, and exposing the concept of earning as fallacious, King Benjamin teaches that we are all beggars, “depend(ing) upon the same Being, even God, for all the substance which we have, for both food and raiment, and for gold, and for silver, and for all the riches which we have of every kind.” Like Korihor, he draws a parallel between material substance and salvation, stating,

“And behold, even at this time, ye have been calling on his name, and begging for a remission of your sins. And has he suffered that ye have begged in vain? Nay; he has poured out his Spirit upon you, and has caused that your hearts should be filled with joy, and has caused that your mouths should be stopped that ye could not find utterance, so exceedingly great was your joy.” (Mosiah 4:20)

Beggars all, we can only be redeemed by that transformation of heart known as Grace, through which we are endowed with charity, the pure love of Christ. Good works are required, certainly. But when we surrender ourselves and become at one with Christ, our hearts will be one with his. Our works will become righteous of their own accord, because they will be a reflection of our hearts: And even after receiving Grace, we will fall short of perfect adherence to the commandments.  We will, however, be born anew, and will desire to learn and to grow and to progress and to be perfected. In the words of a great libertarian thinker,

That goodness comes only by way of the rebirth of the spirit. It is easy and tempting to police our own behaviors and those of others: as missionaries, as church leaders, as lay-members, none of us possesses the ability to transform our own heart, let alone those of others. To surrender oneself to an unknown and intangible mystery, to reject one’s fundamental nature and sense of personal superiority, seeing instead that all others are equally deserving of God’s abundance, to recognize that we have no God-given right to withhold the needful thing from the needy is itself a supernal act of faith. When we are saved, it will be by the Word rather than our works. Yes, we must obey the commandments. But an attempt to do so through vigilant, detail-oriented scrupulosity will lead us away from God, filling us with the same despair that possessed Martin Luther. It leads us to the pride and arrogance of self-justification and the ignorance of God we like to refer to as “self-reliance.”