Where Did All That Debt Come From?

I've intended since the spring to write about our country's current fiscal situation and how we arrived here. For months, Congressional Republicans have been asserting that our federal government does not have a revenue problem, it has a spending problem, and have argued for draconian spending cuts largely aimed at programs that benefit the middle class. And President Obama and many Democrats have largely conceded to the GOP on the issue, allowing them frame the debate about our economic woes as being the result of a large federal debt and ongoing budget deficit. Polling shows that a large majority of Americans blame our country's budget woes on wasteful government spending. However, it is critical to examine our country's fiscal policy during the past decade, to fully understand why our deficit and debt have become so large. The data show that the current budget deficit is primarily the result of 3 factors:

In today's New York Times, billionaire investor Warren Buffett pointed out that he pays a lower federal income tax rate than his staff. His effective tax rate last year? 17.4 percent! His is not a unique case. Our tax code is written so that the wealthiest have the best tax breaks. As the President has said, everyone needs to pay their fair share. And since debt reduction is the pressing issue on politicians' minds in Washington, I hope that the new 'Super Congress' takes a balanced approach that includes significant revenue increases when they look for ways to improve our nation's budgetary problems. I plan on writing more about this and the recent debt ceiling debate - there is a lot more to the subject- but I was impressed by Buffett's Op-Ed.

Buffett states, "my friends and I have been coddled long enough by a billionaire-friendly Congress. It’s time for our government to get serious about shared sacrifice."

It has seemed apparent for some time that Ronald Reagan, the greatest icon of the conservative movement, would not be conservative enough for today's Republican Party. Attempts by Republicans in several state legislatures across the country to eliminate collective bargaining rights of public employee unions has truly been explosive-- the equivalent of the "nuclear option" in politics. Contrary to claims by Republicans such as Governor Scott Walker of Wisconsin, that these moves were made simply to help fight budget deficits, these attempts are nothing more than a power grab.

Thanks for the Invite Mr. Speaker! 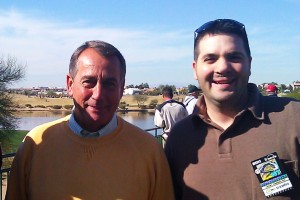 No, Speaker Boehner did not invite me out for drinks in his corporate box at this weekend's Phoenix Open.  But he was kind enough to let me snap off this picture.  With politicking never ceasing, he shook every outstretched hand and stood somewhat attentive for every iPhone camera.

Although Speaker Boehner and I view the political landscape very differently, I do enjoy seeing our leadership out from behind the constructed backdrop created from the Nation's partisan divide.  Enjoy the Open Mr. Speaker -- tomorrow you are back in Washington trying to explain how cutting $100B in discretionary spending impacts the $3.4T budget, how repealing the healthcare bill improves our society, and how crazy lady Michele Bachmann and the pony express can help the Republican Party.

A point was made a few months ago about the Recovery and Reinvestment Act of 2009 (a.k.a. Obama's economic stimulus plan) that really made a lot of sense to me. Most of us probably recall the tragic I-35 bridge collapse in Minneapolis in 2007. The cause of the bridge was due to a faulty design-- the use of under-sized gusset plates-- and an excessive amount of concrete overloading the bridge. The Federal Highway Administration advised shortly thereafter that there were about 700 other U.S. bridges of similar construction and asked states to inspect them. The Society of Civil Engineers recently gave our U.S. infrastructure an overall "D" grade, indicating that in many cases, our roads, bridges, and other vital infrastructure are in dire need of upgrades. I fear we will have more I-35 bridge scenarios in the future because our current national political dialogue is overly focused on deficits, repealing the health care bill (which will increase the deficit), and other distractions.

Let's Tone it Down Several Notches

So far, it appears that the person who targeted Democratic Rep. Gabrielle Giffords of Arizona for assassination, in Saturday's shooting rampage that left 6 people dead and many others seriously wounded, was not directly inspired by the virulent and violent political rhetoric that has been dominating the public discourse over the past 2 years and beyond. And in this post, I am not trying to assign blame for the shooting rampage to anyone aside from the deranged, homicidal gunman, Jared Lee Loughner. But this national tragedy has provided an opportunity for us to reflect on the type of political conversation we engage in both in public and in private. Last March, I posted about some of the recent violence and violent rhetoric. In the aftermath of the passage of the health care reform bill, many prominent opponents of the bill used inappropriate and irresponsible rhetoric that included implicit violent and hateful messages.

Are We Headed for Single Payer Health Care?

It's been interesting to listen to the debate rage over what will happen to the individual health insurance mandate in President Obama's health care reform bill as the issue moves its way up through federal courts. The mandate was recently ruled unconstitutional by one (Bush-appointed) federal judge in Virginia, but was ruled constitutional by a couple of other federal judges. It seems that most pundits agree that this issue is headed for the Supreme Court.

They Were For It Before They Were Against It

During the early 1990s, when President Bill Clinton tasked First Lady Hillary Clinton to lead the effort to overhaul the nation's health care system, Republicans proposed an alternate idea to Hillary's proposal, which envisioned a larger role for government in health care than what President Obama signed into law last March. That Republican proposal was a health insurance mandate that would require all Americans to have coverage, precisely the same obligation that Republicans have vehemently lambasted in the recent health care reform bill. Polled individually, all of the major elements of Obama's health care overhaul are very popular with the notable exception of the health insurance mandate. You'll be hard-pressed to find a politician or citizen anywhere who thinks it is a bad idea that parents can keep their children covered under their insurance plan until age 26, or that insurance companies can no longer deny children with pre-existing conditions coverage, or that insurance companies cannot cancel someone's plan when they become ill.

Morality and the Health Care Crisis in America

Health care reform is not just a political issue for me- it's also a moral issue. There is nothing more fundamental to one's well-being than their health. One's ability to obtain an education, to acquire and hold a job, and to sustain a family is entirely dependent on their physical and mental health. If we, as the world's most wealthy country, were happy with the pre-reform status quo, with leaving millions of lower and middle working class Americans either under-insured or uninsured, and were content with a system that bankrupts people when they become sick and lose their jobs as a result, then we've had a significant moral lapse. As I pointed out in a previous post about a "culture of life," can one truly claim to be "pro-life" when they are content to let people become sick and die for lack of treatment in the wealthiest, most powerful country the world has ever known? I've actually had some conservative friends argue as a counterpoint that anyone can be seen in an E.R. (at taxpayer expense), thus there is no need for reform. E.R. access as the sole point of access to health care is woefully inadequate. So, say someone has cancer, do you think they can go to the E.R. for chemotherapy? It doesn't take a health care professional to explain that the E.R. can handle only emergencies, not medium and long-term care for the seriously and chronically ill, not to mention cost-saving and life-enhancing preventative medicine.