As a general rule I find it very difficult to people who don’t share my religious beliefs to understand why we Mormons are so “uptight” or “funny” about taking the Lord’s name in vain. They can’t understand why we’re so bothered by it. I’ve even had some ask me “Why are you so afraid to say the name of someone you love?” I reply that it’s exactly because we do love Him so much that we are offended or even hurt by the use of His name as a curse word. 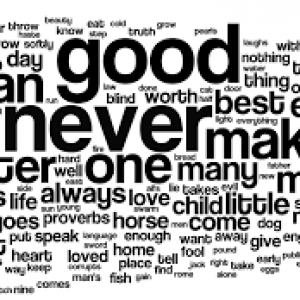 Imagine that someone used your mother’s name as a curse. A word which you usually find pleasant would become offensive because it’s being used to degrade someone you love. This is how we feel about Heavenly Father and the Savior. And as much as we love them, they also love us. So doesn’t it make sense that Heavenly Father would be offended by language which insults and degrades His children? The Savior taught in :

As both a church and a culture, I think it would be fair to say that we believe words matter. We consider the words we choose to use and not use to be a reflection of who we are. This is, of course, not very popular in some circles. They are words we don’t like to use or hear, which we consider inappropriate or offensive to the spirit. Some of them we almost universally agree upon, and some very more from one individual to another. But certainly the idea of being offended by a “bad word” is not new to any LDS person. For many years I was an actor, and from time to time I found myself having to say “I won’t say that word”, and just recently in church I heard a sister talk about work using language she found offensive when speaking to her. She asked them not to, and they stopped. I hear stories of this sort all the time, and they are usually greeted with enthusiasm by church members, who see them as standing up for what it right. What puzzles me is how opposite in many circles is our reaction to what some call “political correctness”.

“Political correctness” is among the most hated and vilified concepts for conservatives. The idea that within this philosophy some words are inappropriate and offensive to some people is considered not just uptight, but to an attack on freedom of speech (never mind that freedom of speech applies to restrictions by the government, not individuals).  I simply can’t see the logic in this. Why is okay for us to be offended by profanity and vulgarity, but unacceptable for people to be offended by language they consider degrading? Why does one person have the right to say people should find a substitute for the words we find offensive, but we react with such outrage when asked to do the same thing? For me, the single word I find most offensive(aside from the taking of the Lord’s name in vain) begins with the letter R, and traditionally refers to those with certain types of disabilities or “special needs”. As a person with a long-standing family tradition of working with and helping people with these disabilities, it genuinely hurts me anytime I hear the word used as an insult. It makes me think of my beloved adopted aunt who is disabled, and helped my mother and grandmother take care of me as a child. I’ve had people who will come completely unhinged by even mild profanity become angry with me for asking them not to use this word in their presence. And don’t we liberals even think about suggesting that the name of a certain NFL team is offensive just because its common usage has always been as a racial slur. How dare we be so uptight? How dare we tell them what they can and can’t say? How dare we . . . stand up and tell people we consider the language they are using to be inappropriate and offensive.

I believe that words like the examples I’ve mentioned belittle God’s children and are therefore as offensive to the spirit as any could be. We have been counseled not to use language which degrades. Would the Lord really say that references to bodily functions are off limits, but words which insult, disrespect and inflict hurt upon His children because of their race or disabilities (or yes, sexual orientation) are just fine? With all my heart and soul I believe the answer is no. But my goal here is not to convince you to believe the same thing. It is to suggest that those who find them so be given the same respect we ask for with our standards. And yes, it certainly works the other way as well. Many in the world want respect for their beliefs but will not treat our beliefs with respect. But I don’t feel that we can use “Well, they don’t respect my standards, why should I respect theirs?” as a justification. It doesn’t fit our beliefs to say we can do wrong just because wrong is being done by another, whether to us or to someone else. Since when do we have a problem with holding ourselves to higher standard than that which is accepted by the world?

I hope people can see at least some aspects of the “political correctness” they so fear and despise as a set of moral standards, one which they can choose to agree with or not, but which should be treated with the same respect that they would want for the own standards. I realize that many people who use the R-word today say “I’m not talking about the mentally challenged when I say that” or “I don’t mean to be offensive” or other such rationalizations. Very often people using profanity (especially taking the Lord’s name in vain) don’t mean to offend, but that doesn’t change our feelings about the words. Because, after all, words matter.