A Mormon on May Day 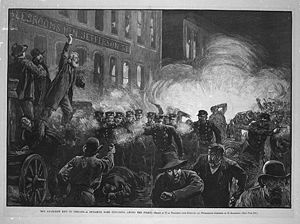 Poverty is an anomaly to the rich, they cannot understand why the poor when hungry do not simply ring the bell. --Walter Bagehot

“May Day” repeated three times has become the internationally recognized distress signal for all vessels (planes, ships, etc) that are in peril. Even though technically the “May Day” phrase originated from the French phrase “venez m’aider”---meaning come help me---I would suggest that the International Workers’ Day held every May 1st in commemoration of the May 4, 1886 Haymarket Strike in Chicago adopt this distress call--- that is to be used only in the most dire of circumstances.

Yesterday the NYSE hit an all time high! We have all seen the graphs showing worker productivity increasing during the last several decades while income and wealth concentration disparity between the working poor and the top one percent is ever widening. To add to these cold/hard statistics, there have been several books written showing the human costs that stalk the poor, the unemployed and the working poor in the wealthiest nation in the world. If we are willing to have ears to hear and eyes to see beyond our own comfort we will should begin to notice the cashier at WalMart, the workers who take our order at Burger King, the laborers who pick our vegetables, but yet live everyday on the edge of hunger and homelessness.

While conservatives are more than willing to speak about the “free” market and their cloistered principles while at the same time decrying the laziness and dishonesty of those on food stamps or any form of government assistance, the reality is that the working poor have never worked harder and yet received so little in relation to the ever increasing cost of living.[ref]Source (PDF): http://economics.mit.edu/files/3279[/ref] Unchecked “free” markets without a commensurate willingness to provide a generous safety net always lead to gross inequality and the concentration of wealth in the hands of the few.

This May Day we should consider that our sacred texts are a call to attend to temporal affairs the Lord’s way “that the poor shall be exalted, in that the rich are made low” and that “if ye are not equal in earthly things ye cannot be equal in obtaining heavenly things”----“for the earth is full and there is enough to spare.” Surely one cannot read King Benjamin’s address and not realize that we are all beggars and merit nothing but exist each day by the grace of God, and, therefore, should extend that same grace to the least among us.

And yet we have taken something as plain as the parable of the talents (Matthew 25) and inverted its real message by praising those that get more and more when in fact the Lord was condemning the stern/hard master who rewarded to excess those that played the market game—even extracting the forbidden usury---while stripping the one man who refused to engage in the brutal rules of capitalism. But to those that read the entire sermon to the end (all of Matthew 25 and not parse it) discover why the Lord actually condemns the virgins who would not share their oil and the hard master that gave more to those that had abundance while stripping the man who had only one talent of that which he had leaving him destitute.

For after the judgment of the world embodied in a social strata of the virgins and the hard master of the market, then comes the Lord Himself to judge correctly as outlined clearly in Matthew 25: 31-46 for: Then the “Son of Man shall come in His Glory” (the real judge/master) and He shall gather all nations together to judge righteously (and not the judgment we saw in the previous parables of the selfish virgins and the hard master). He then shall separate the “sheep from the goats.” And how does he separate/judge them? Those that gave to those that hungered, naked, stranger (homeless) and in short those that have done “it unto the least of these my brethren” are His sheep and those who refused to share their oil or strip the one talent from the least are those that are the goats. It could not be more plain once we decide to see and hear.

Today is May Day! A day created to give voice to the least among us. Let’s join the chorus of those in our nation and world and recommit our voice to systemic changes that perpetuate poverty and our substance to address immediate needs of the least among us. Many among us our in peril everyday and we can make a difference. While “Brightly Beams our Father’s Mercy” from the lighthouse we can and must be the lower lights upon the shore.