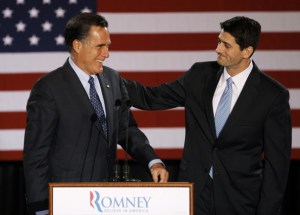 I won't even go into the details of how or what or why I disagree with Paul Ryan (and not just in one area - but in so many many ways.)  I don't feel the need to; just do a google search on "Why Paul Ryan is Wrong" and you'll see an explosion of articles and links describing the problems with this congressman.

This is what I don't get: why Representative Paul Ryan?  I don't understand how the formerly moderate Governor of Massachusetts could pick such an extremely right (meaning wrong) conservative as his running mate.  Maybe I really bought into the Etch-a-Sketch comment.  I somehow believed that Mitt Romney would right his boat into the political center after he won the Republican nomination.  There is an oft-stated idea that the Romney of yesteryear (Governor of Massachusetts) would not have voted for the Romney we see now running for president - and the VP Ryan pick really bears that out.   So I do apologize for my naiveté on this one.  It's not like I would have voted for Romney regardless of who he picked, but I did find myself caught off guard by his Vice President choice.

In fact, a friend of mine has been pranking me with random text messages these past two weeks proclaiming fake Romney VP picks; the first one said, "Romney picks Sarah Palin as his VP!" I paused for a moment, and then realized it was a joke.  The second one even came with a fake abcnews.go.com link: "Romney picks LDS President Thomas S. Monson as VP." I knew that was false - but I clicked on the link anyway just to make sure.  So when I got his latest text message on Friday night, I figured "Ryan selected as VP" was leaning towards the ridiculous just like the previous two texts.  Alas, this is not the case.

But still I can't help mulling it over in my head: what is Romney hoping to accomplish by picking Paul Ryan?  Is he not convinced that he has the conservative vote in the bag?  Well, maybe this is Mitt Romney's vice (if we can call it that): his willingness to do anything and everything to please the conservative wing of his party.  Because if there is some middle ground of voters still to be won over - or the undecided - (is that another word for people who don't pay attention to politics until the week before the election?) - how does Ryan help them choose Romney?  Clearly Romney really likes the guy - and maybe he'll just adopt Ryan's fiscal plans as his own since that would be easier than coming up with one - (or maybe he'll just adopt Ryan as another one of his sons, since he kind of looks like them anyway.)  Regardless, I don't get how Ryan's politics will do anything more than alienate a large majority of the electorate.

Maybe I'm wrong.  But my bet (and my vote) is on Obama for 2012.  It feels good to be on the right side of history on this one (again.)
Contributors Paul Ryan Romney
Do you like this post?
Tweet