The liberal businessperson stops one day to survey her business. "Wow," she thinks to herself, "look at all these people who work at my company. They work so hard, stay so late, dedicate so much. All for me and my business. They must be Saints!"

The conservative businessperson stops one day to survey her business. "Wow," she thinks to herself, "look at all these people who work at my company. They work so hard, stay so late, dedicate so much. All for me and my business. I must be a Saint!" 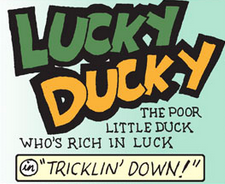 The other day we all learned that Mitt Romney is a conservative: he had the gal to say to a group of wealthy fundraisers the very thing many conservatives have been saying for quite some time: the folks in this country who don't pay any federal income tax are moochers and grifters. You don't have to look very far to hear this exact same argument repeated in a variety of forms. My favorite is The Wall Street Journal, which scornfully refers to these people as "lucky duckies."

Now, we can look at these people as lucky duckies, moochers who live a carefree life of fully-subsidized laziness. Or, we could look at these folks as they really are: the working poor, vetrans, college students, retirees, single mothers with two jobs, all paying their fair share of taxes overall.

We might be tempted to say "wow, those 'takers' making a living off the hard work of the 'makers.'" Or we could say "isn't it sad that almost 1/2 of the people in our country don't have jobs that would even qualify them for the lowest federal income tax bracket?"

What this boils down to is a fear that the 47% of Americans who pay no federal income taxes will become complacent, content to wallow in their poverty, because "Hey, the government will make sure we don't die!" It is a fear that somehow it won't be good for them if we help them out--they need to learn a better work ethic and then they won't need our help. David Brooks summarizes the problem with this viewpoint quite effectively:

The formula [Romney] sketches is this: People who are forced to make it on their own have drive. People who receive benefits have dependency.

The truth is, we all have hopes and dreams, and these ambitions are stoked--not quenched--when someone helps us work toward them. But the conservatives linked to above don't agree. They are still convinced that the poor need to work harder, need to pay more into the system. That somehow the poor are at fault for their poverty. This "work-hard-ier than thou" attitude is heartily condemned in the Book of Mormon by Jacob, an ancient prophet worried that the wealthy among his people felt they were somehow better than the poor among them:

And the hand of providence hath smiled upon you most pleasingly, that you have obtained many riches; and because some of you have obtained more abundantly than that of your brethren ye are lifted up in the pride of your hearts, and wear stiff necks and high heads because of the costliness of your apparel, and persecute your brethren because ye suppose that ye are better than they. -Jacob 2:13

Jacob isn't alone in the Mormon canon, either. Perhaps the wealthy in Jacob's time were too focused on their own saintliness to lend a hand to the persecuted and demonized masses of poor saints among them.
Current Events Economy
Do you like this post?
Tweet