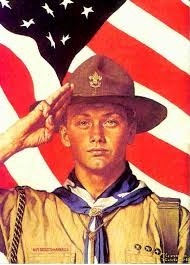 I just filled out my official BSA alumni survey. I am very impressed by the consideration the Boy Scout organization seems to be giving this issue. I don't have much to say about the process at this point, though I'm sure there will be a lot to say after they've made their decision sometime after April 1st (when they said the survey was due).

I did some across one person, though, who said he threatened to remove his boys from from the scouting program altogether if they change their policy too allow homosexual scouts and leaders. I leave it up to him to know what is best for his family, but I am quite confused about that sentiment. Here's why:

Imagine an 14 year-old mormon boy who is homosexual. He has the priesthood (openly homosexual males can have the priesthood), attends the temple regularly to do baptisms for the dead (homosexual males/females can hold temple recommends), plans on serving an honorable full time mission (also allowed). In this most fragile of teenage years, though, he is not allowed to work on the same projects, merit badges, or awards his friends and fellow Mormons are, because the BSA won't allow him to be a Boy Scout. He is ostracized among his own people.

Is that really the message we want to be sending to these people, children of our Heavenly Father whom the Church already openly accepts for who they are?