Over the past two years, this country has experienced a surge of activity and progress in terms of rights for the LGBTQIA community.  Students of legal history will note that, as was the case in the 1950s and 1960s in civil rights battles, the federal courts have been leading the charge. 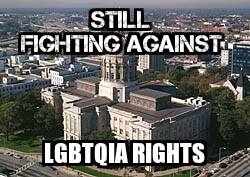 On June 26, 2013, the United States Supreme Court, in a 5-4 decision, ruled that Section 3 of the Defense of Marriage Act (DOMA), which defined marriage as a union between one man and one woman, was unconstitutional.[1]  In another 5-4 decision, the Supreme Court held that sponsors of California’s Proposition 8, which had outlawed same-sex marriages, did not have standing to appeal the decision of the federal district court, thereby upholding that court’s decision which had invalidated Proposition 8.[2]  In the aftermath of those Supreme Court decisions, more and more states were added to the tally of states where same sex marriage was legal, as federal district courts and circuit courts issued decision after decision invalidating state laws prohibiting same sex marriage.[3]

I join with members of the LGBTQIA community and my fellow allies in celebrating these victories.  I am also eagerly awaiting what many legal commentators predict will be a decision from the United States Supreme Court in June 2015 proclaiming that equality in marriage is the law of the land.  However, mixed with my feelings of celebration and anticipation are feelings of heightened concern about the attempts of local and state governments to halt or at least hinder the progress toward equal rights for the LGBTQIA community.

I have lived in Georgia all my life, and I am proud to call myself a Georgian.  However, I have watched in dismay as my state has insisted upon leading, or at least being in the forefront, of state legislative efforts to undo the political and civil rights gains of African Americans, the LGBTQIA community, and other minorities.  These efforts have ranged from redrawing congressional districts so as to dilute the votes of African Americans and other minorities to enacting restrictive and unnecessary voter ID laws to adopting a constitutional amendment defining marriage as between a man and a woman.

Now my state is on the brink of enacting into law a piece of legislation that is euphemistically entitled as the Georgia Religious Freedom Restoration Act.[4] The legislation, SB 129, would establish in state law a religious exemption that would allow people, including government employees, to assert that complying with various laws prohibiting discrimination or protecting equal rights violates their free exercise of their religion.

One of the troubling aspects of the proposed legislation is its definition of “exercise of religion” which includes actions taken “whether or not that act was compelled by, or central to, a system of religious belief.”[5] While this language has been changed from an earlier version of the bill, it is still broad enough to allow local governmental officials to refuse to issue licenses or permits that fall under the jurisdiction of their offices.  For instance, under this language, a local probate court judge could refuse to issue a marriage license to a same-sex couple or a building inspector could refuse to issue a building permit to a same-sex couple on the grounds that doing so would violate his or her religious beliefs.

Opponents of the legislation have marshaled all of their forces in an attempt to prevent its passage.  One group, Georgia Equality, Inc. even enlisted the aid and legal services of former Georgia Attorney General Michael J. Bowers,[6] who wrote a blistering seven page legal opinion criticizing SB 129 and a similar bill (House Bill 218) that was being considered in the Georgia House.

In the bold and forthright language that characterized his statements during his service as Georgia’s Attorney General and his subsequent litigation in private practice, Bowers wrote that the proposed legislation posed several dangers

First, I believe if enacted into law this legislation will be an excuse to practice invidious discrimination. Second, if enacted, the proposed RFRA will permit everyone to become a law unto themselves in terms of deciding what laws they will or will not obey, based on whatever religious tenets they may profess or create at any given time.  The potential intended and unintended consequences are alarming.  Third, if law, the proposed RFRA is full of uncertainties making enforcement and administration difficult.[7]

While most commentators agree that the primary impetus for SB 129 is the desire of conservatives and members of fundamentalist religious sects to continue the fight against same-sex marriage, the language of SB 129 is broad enough to create a religious exemption to laws prohibiting discrimination against people based on their race, color, religion, sex, and disability.  Members of the LDS Church who are considering supporting SB 129 out of unfounded fears that allowing same-sex marriage will mean that bishops will be forced to perform same-sex marriages or that same-sex couples will be able to demand that they be allowed to marry at LDS Temples need to recognize that, in Georgia, members of some fundamentalist religious sects who are suspicious of the LDS faith could decide to deny marriage licenses to LDS couples or prevent LDS members from gaining access to death certificates and other information used in doing genealogical research, all under cover of the language in SB 129.

I want us to continue to celebrate the victories in the area of LGBTQIA rights and I want us to anticipate future victories.  However, I exhort us to be ever watchful and vigilant so those victories are not undone by the legislative efforts of states, including my home state of Georgia, that are leading the charge to undo those victories.

[3] As of the writing of this piece, same-sex marriage is legal in thirty-seven (37) states.   http://gaymarriage.procon.org/

[6] The enlisting of the aid of Bowers struck many as quite interesting and even somewhat ironic given that, in the past, Bowers had achieved national prominence for his stances in opposition of LGBTQIA rights.  See Bowers v. Hardwick, 478 U.S. 186 (1986)(Case upheld the constitutionality of Georgia law criminalizing consensual homosexual sex); Shahar v. Bowers, 114 F.3d 1097 (11th Cir. 1997)(Case upheld the decision of the Georgia Attorney General to withdraw job offer after learning that prospective employee was a lesbian).