Conservatives often invoke our country's Founding Fathers as well as prominent historical figures like economist Adam Smith, whose ideas about the "invisible hand" of free markets helped form the theoretical foundation of modern capitalism, when they advocate far-right economic policies. Lately, there has been a lot of talk by GOP presidential candidates about creating a flat tax system in the U.S., particularly from Texas Governor Rick Perry and Godfather's Pizza founder Herman Cain. Ironically, you'll never hear a conservative pundit or politician point out that Adam Smith and Thomas Jefferson, among other historical figures, were strongly in favor of progressive taxation.

In a letter he wrote to James Madison in 1785, Thomas Jefferson described an encounter he had with a poor woman who earned hardly anything as a day laborer and struggled to support her two children. The encounter caused him to reflect on the great wealth inequalities that existed then in both Europe and the United States. Jefferson observed,

The property of this country is absolutely concentrated in a very few hands... I am conscious that an equal division of property is impracticable. But the consequences of this enormous inequality producing so much misery to the bulk of mankind, legislators cannot invent too many devices for subdividing property, only taking care to let their subdivisions go hand in hand with the natural affections of the human mind. Another means of silently lessening the inequality of property is to exempt all from taxation below a certain point, and to tax the higher portions of property in geometrical progression as they rise. Whenever there is in any country, uncultivated lands and unemployed poor, it is clear that the laws of property have been so far extended as to violate natural right. The earth is given as a common stock for man to labor and live on.

Jefferson clearly advocated a progressive system of taxation (referred to "redistribution of wealth" by Republicans), where the poor would be exempted completely from taxes while taxes rose in "geometrical progression" on wealthier individuals. The statement above nicely fits the theme of the current "Occupy" protests, where hundreds of thousands of Americans have expressed concern about the great wealth inequalities that exist in our country today and the flagrant abuses of corporate power that helped lead to the financial crisis and recession.

What is perhaps most striking about this subject is that the economic inequality that exists in America today is as large as it has been in almost 100 years. 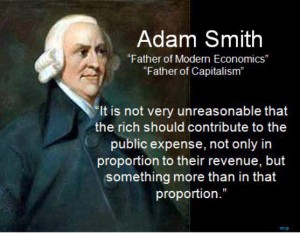 The top 1% of Americans control one third of America's wealth; the top 10% control two thirds. Over the past 30 years the bottom 80% of Americans have seen their share of income drop significantly, while the top 20%, and especially the top 1% have seen their share of income skyrocket. (Click here and here to see some useful charts that illustrate the great wealth divide in the U.S.) Even during the current Great Recession, while CEOs and other corporate executives were running their businesses into the ground, with some businesses receiving taxpayer-funded bailouts, corporate America saw record bonuses awarded.

Adam Smith, who is considered by many as the founding father of modern capitalism, also favored a progressive tax. In his book, the Wealth of Nations, he stated,

The necessaries of life occasion the great expense of the poor. They find it difficult to get food, and the greater part of their little revenue is spent in getting it. The luxuries and vanities of life occasion the principal expense of the rich, and a magnificent house embellishes and sets off to the best advantage all the other luxuries and vanities which they possess. A tax upon house-rents, therefore, would in general fall heaviest upon the rich; and in this sort of inequality there would not, perhaps, be anything very unreasonable. It is not very unreasonable that the rich should contribute to the public expense, not only in proportion to their revenue, but something more than in that proportion.

These days, when Democrats advocate progressive taxation, Republicans are quick to paint them as socialists and communists. Just look at Republicans' reactions to President Obama's proposal to slightly raise taxes on millionaires and billionaires to help solve our budget deficit, which exists in large part due to a drop in tax revenue. He's been attacked as a socialist, a communist, and class warrior for espousing such a belief. However, they wouldn't ever dare give their idols, Thomas Jefferson and Adam Smith, such labels. (Those who use of the terms "socialist" and "communist" to describe the Obama Administration policies show a complete lack of understanding the actual definitions of those terms within political science. But this will have to be a topic for a future post.)

Perhaps the most profound and frightening statistic of the great inequality that exists in the U.S. today is our high ranking on the Gini Index, which measures the degree of inequality in the distribution of family income by country. Third World train wrecks like Uganda, Nigeria, and Nicaragua, have better income equality than the United States. In fact, the U.S. ranks the highest among all developed countries for income inequality. This is not something to be proud of! Democracy cannot flourish without a vibrant middle class. There are many reasons why gross income inequality is bad, including these. But probably the biggest reason is the fact that wealth typically equates to political influence. This is especially true in the aftermath of the Supreme Court's ruling in Citizens United, which allowed corporations to pour unlimited amounts of money into third party groups such as political action committees that are used to attack or support political candidates. In reality, a flat tax would exacerbate income disparities by increasing the tax burden on the poor and middle class and thus can truly be considered regressive. So the next time you hear someone advocate a flat tax and suggest it is in your interest, unless you are in the 1%, you ought to carefully consider the sage words of Thomas Jefferson and Adam Smith.