In 2013, as many readers will recall, Mrs. Pitt learned that she carried a mutation in a gene, known as the BRCA1 gene, which increased her risk of breast cancer to 87% and her risk of ovarian cancer to 50%.   Mrs. Pitt, who had lost her mother, grandmother, and an aunt to cancer, decided to have both of her breasts removed to decrease her risk.  At the time she had the double mastectomy, she indicated that she also intended to have her ovaries and fallopian tubes removed.  However, as she wrote in her op-ed piece, she knew that doing so would cause her to go into instant menopause so she had been preparing herself, researching various medicines, and exploring her options.  In March 2015, when a regularly scheduled exam revealed the presence of some markers that could be indicative of cancer, she underwent a series of tests. After an agonizing period of five days, she learned that she did not have cancer, but, based on the combination of the mutation in the BRCA1 gene and her family history, decided to proceed, immediately, with having her ovaries and fallopian tubes removed.[i]

I applaud Mrs. Pitt for her honesty and her openness about her decisions concerning her personal health care and for urging women to explore their options and to take charge of their own health care.  I echo her prayer that she will live to see her children reach adulthood and that she will live to be an elderly lady surrounded by grandchildren and great-grandchildren.

As I was reading her op-ed piece and praying for a good outcome for her, however, I thought about how different her story would have been if she had been a woman of color.

Whether one approaches the subject from personal stories, anecdotal information, or private and governmental research, the conclusion is the same – the status of health care for women of color is quite bleak.

In October 2014, the Alliance for a Just Society[ii] issued a forty-eight page 50-State Report Card on Women’s Health (aka Women’s Health Report Card) in which it assessed each state’s performance in three subject areas: health coverage for women, women’s access to health care, and women’s health outcomes.  The results were overwhelmingly bad, particularly for a country that describes itself as the leader of the free world.  While two states—Massachusetts and Connecticut--received a grade of “A” in all three areas and five more states received an “A” as their overall grade, twelve states received a grade of “D” or “F” in all categories.  Those states were Arkansas, Georgia, Idaho, Indiana, Louisiana, Mississippi, Missouri, Oklahoma, South Carolina, Texas, West Virginia and Wyoming.[iii]

Those of us who have watched the resistance to the Affordable Care Act will not be surprised to learn that eight of these states (Georgia, Idaho, Louisiana, Mississippi, Oklahoma, South Carolina, Texas, and Wyoming) are among the sixteen states whose governors and/or state legislatures have chosen not to expand Medicaid.[iv]

As bleak as the results were for all women, they were even worse for women of color.  Here are a few statistics and statements from the Executive Summary of the Women’s Health Report Card[vi] that dramatically highlight those racial disparities:

All of these statistics are deplorable. 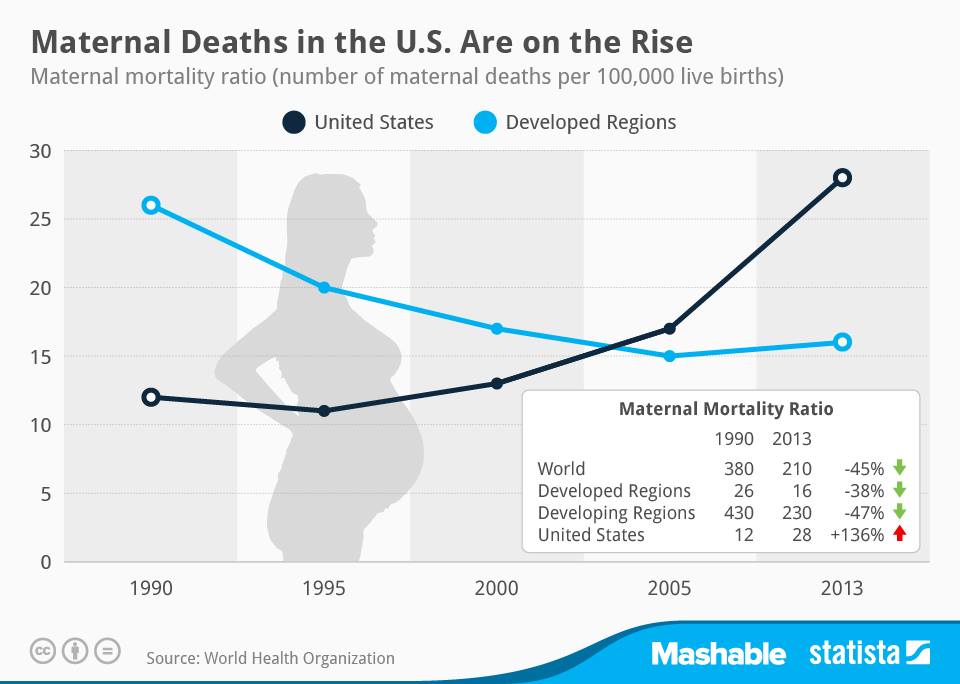 A closer look at maternal mortality rates reveals just how deplorable they are.  According to a report entitled, “Reproductive Injustice:  Racial and Gender Discrimination in U. S. Health Care,”[vii] the U.S. Department of Health and Human Services identified maternal mortality as one of the most rapidly deteriorating areas of health quality over the past three years.  The report stated:

Maternal mortality is a human rights crisis in the United States. Between 1990 and 2013, as the overwhelming majority of countries dramatically reduced the incidence of maternal mortality, the maternal mortality ratio in the U.S. more than doubled from 12 to 28 maternal deaths out of every 100,000 live births. Racial disparities fuel this crisis. For the last four decades, Black women have been dying in childbirth at a rate three to four times their White counterparts. Cities and states with a high African American population also have the highest rates of maternal mortality in the country; in some areas of Mississippi, for example, the rate of maternal death for women of color exceeds that of Sub-Saharan Africa, while the number of White women who die in childbirth is too insignificant to report.

Too many of us know too many stories about women of color who do not have health insurance and who begin their pregnancies already suffering from diabetes or hypertension or heart disease.  Sadly, some of us are all too familiar with stories that ended in maternal death.

The existence of these deplorable statistics and these painful anecdotes in a country where many of its citizens love to describe it as the “most powerful nation in the world” or “a Christian nation” should give all of us reason to be ashamed.

One relatively simple thing that we can do, as individuals, is to put our support behind candidates for public office who support the expansion of health insurance coverage.  As members of religious and civic organizations, we can encourage those organizations to hold free health fairs, including mobile health fairs, that include not only screening for health conditions but opportunities to learn about and sign up for existing health insurance programs.  We can demand that our governmental officials establish community-based outreach programs to help increase enrollment in existing health insurance programs and that they either cease their efforts to thwart the Affordable Care Act or enact an alternative that expands health care coverage to even more individuals.

Will these efforts take time? Yes. Will they cost money? Yes. Do we have a choice? No.

[iv] The issue of Medicaid expansion is being still being discussed in another six states.  See Kaiser Family Foundation, “Status of State Action on the Medicaid Expansion Decision,” accessed April 11, 2015 at:

[v] http://allianceforajustsociety.org/wp-content/uploads/2014/10/50-State-Rankings-and-Grades-Table.pdf.  This assessment of women’s health care in Utah is consistent with the “C-” grade Utah received on the Poverty and Opportunity Composite Index, which is compiled by the Institute for Women’s Policy Research and, grades states based on how women are faring in four key areas: educational attainment, business ownership, poverty and access to health insurance.  http://www.ksl.com/?sid=34177427&nid=148&s_cid=rss-extlink.  An alarming statistic in this report was that 41% of single mother households live in poverty.