A meme equating Hillary Clinton with Dolores Umbridge and Bernie Sanders with Dumbledore was recently posted in a major Facebook group for liberal Latter-day Saints. This post is nerding out about why it's wrong and what it suggests about Utah going Blue in November.

(SPOILERS ABOUND for Harry Potter / Lord of the Rings / Star Wars / Hunger Games - THIS IS YOUR FINAL WARNING). 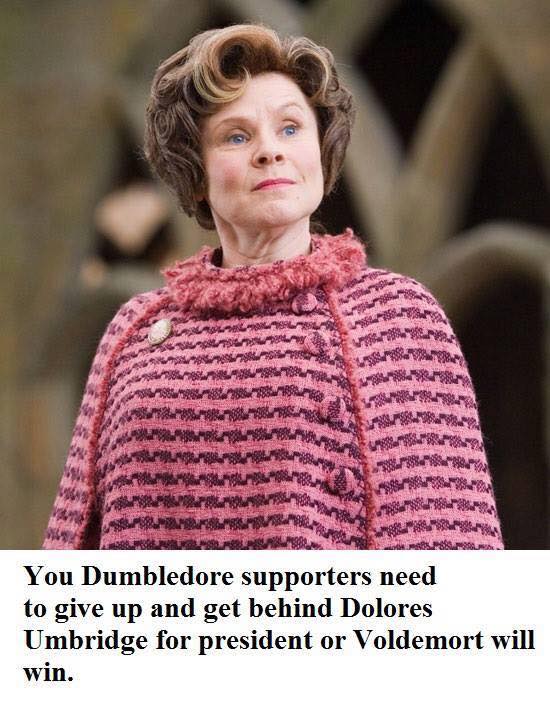 First, the best analog to Dolores Umbridge is Harriet Miers: climbing through personal loyalty and managerial expertise but ill-suited to the positions to which she's ultimately appointed. Let's just get that out of the way.

Second, Bernie can't be Dumbledore because Dumbledore is quite explicit he would never, ever run for Minister of Magic.

Dumbledore's reluctance, specifically, is tied to his worries about what he would do with political power. His fascist imaginings with his friend unrequited crush Grindelwald during their youth taught him that he has some problematic tendencies that need to be checked. While he's able to channel them in productive ways-- becoming a champion for Muggle rights, looking out for the rights of the accused, marshaling resistance against Voldemort twice, he tends to do so within a council, whether it be the Wizengamot, the Hogwarts Board of Governors, or the Order of the Phoenix. Dumbledore, despite his sorting into Gryffindor, exhibits some rather Slytherclaw tendencies and generally recognizes that he needs checks and balances. (Not that he always uses checks and balances: he messes up in his relationship with Harry and is dominating toward Snape, which serve as reminders to himself that he shouldn't be trusted with more power than he already has.)

This tendency to eschew power, to be skeptical of it, particularly political power and absolute power, is very, very common in how we depict elderly (male) magicians in myth. Gandalf DOES NOT TRUST himself with the one ring; Merlin's off in the woods somewhere; original trilogy Obi-Wan and Yoda are both hermits / monks. They channel their energies into taking care of business outside of a political leadership role and into mentoring / education of the young one who can be trusted with the power, whether it's Frodo (and Sam, really), Arthur, or Luke. (It is interesting to note that many of these heroes either mess up at the end or wind up removing themselves from the situation down the road after bringing about the new order. I'm interested to see what happens to Luke in the remaining two films.)

Joseph Campbell identified the archetypes of young hero / old sage as key parts of the Hero's Journey, which involves a coming of age story for the Hero and the overthrow of the old order / (re)establishment of the new. William Strauss and Neil Howe in their book Generations went a step further and talked about how in phases of national crisis, emerging "Civic" generations (GIs, Millennials) looked to "gray champions" (Missionary, Boomers) for philosophic mentoring / pointing of direction. The elderly Benjamin Franklin and the young Thomas Jefferson, etc.

So, while Bernie and, especially, his supporters, like to tie him to the Wizard archetype (especially after the bird), the very fact that he seeks for power is disqualifying. He is a politician, who makes calculations (protecting gun manufacturers from lawsuits, supporting the building of a fighter jet the Pentagon doesn't want). I've known a few die-hard Hillary supporters who look at his swooping into the Democratic party and entitled behavior as rather like Gilderoy Lockhart. (NB: Trump is far and away the most pandering Lockhartian figure still in the race, albeit a Lockhart who discovers that he receives a lot of media attention if he has a Dark Mark face tattoo.)

But where are the women?

First, Campbell was limited by the eras in which the stories he examined were written, eras that tended to be deeply, deeply sexist. As a result, the Hero's Journey model does not fit for stories of young women like it does for young men. I strongly recommend this piece from FanGirlBlog on Campbell and stories about young women.

Second, as many, many feminist critics have pointed out, while Hero's Journeys include important roles for older male mentors, there are far fewer, and also more limited roles for older women. An older woman in true power is, by routine, either suspicious (Maleficent / Morgana) or dotty/subservient (the Fairy Godmother). This literary confinement has directly impacted how those in power have treated actual women, particularly colonized women of color. Even in Hunger Games, Katniss has few older female mentors. Effie Trinket is silly, Mags is mute, Alma Coin is fascistic and is killed by Katniss. We have a word for a group of older women of power: a coven. (One witch can be good or bad, depending on whether she bends her power to serve the hero/heroine, but a group of witches is always trouble unless made into fairy godmothers who exist to serve and grant wishes.) In this way, Harry Potter was revolutionary in that there were multiple older female witches who did things-- McGonagall, Sprout, Molly Weasley. It would have been nice to see them counseling together or mentoring Hermione, Ginny, Luna . . .

There's a reason, in more polite company, that Hillary is often linked to Leslie Knope or Tracy Flick: the (over)eager, do-gooding woman who thirsts for power. We have generally few mythic roles for older women in power. I AM NOT saying that every criticism of Hillary is rooted in sexism. I am saying that part of the reason there's a tendency to see Hillary as "entitled" or "ambitious" but not to see that in other presidential candidates is rooted in the deep history of Western society and our literary depictions of women. We absorb the idea that women are liars, and ignore the fact that Hillary's remarkably truthful. Myths and literature have a real world impact, and so if Bernie is (wrongly) slated as Dumbledore, Hillary becomes Umbridge, a poor fit considering her track record.

(Image from The Mary Sue post that argues that Hillary is Hermione, which fits well after The Cursed Child.)

What does this mean for the Hillary campaign among Latter-day Saints?

Much ink has been spilled on the role of women in Mormonism, and Latter-day Saints' views of women. Some of the best has even been collected in a new volume from Oxford University Press. One of the most notable moments in the history of female political leaders in Utah occurred in 2004:

Olene Walker became the first female governor of Utah when Mike Leavitt joined the Bush administration. The next year, the Utah Republican party dropped her from the ticket, allowing two men to run for the Republican nomination but not Walker.

At the same time, Latter-day Saints are accustomed to hearing from female leaders of a certain age. And in case you thought I was kidding about the fairy godmother trope, here's a picture that circulated widely after Bonnie Oscarson was appointed as the new head of the Church's Young Women's Organization: 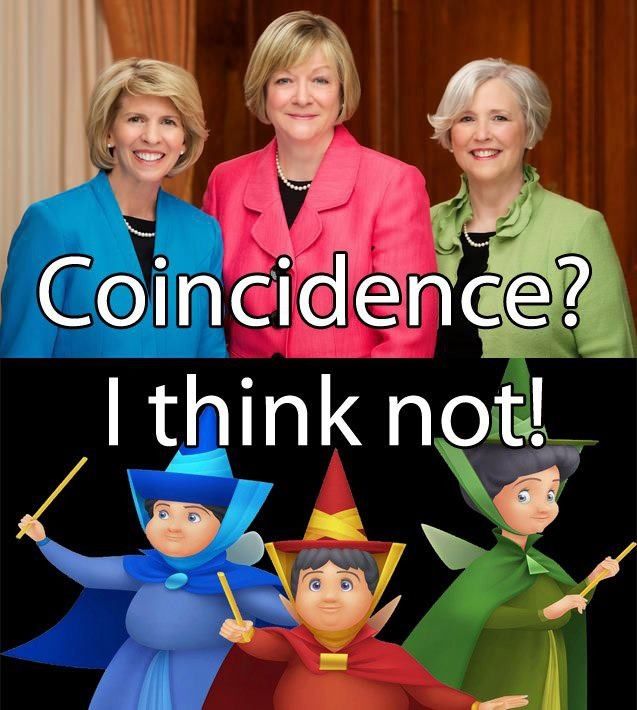 I don't know how much the fairy godmother trope is available to Hillary in her bid to win LDS votes. I'm not in charge of Mormons for Hillary this year, but if I were, here are a few stories I'd be sure to share:

1) Hillary talks to People magazine about being a grandmother and her oh-so-Mormon "date nights" with Bill.

2) How Hillary's Methodism has shaped her approach to politics and governing. Here's a piece on Hillary and Methodism in the Deseret News.

3) The page from On The Issues about Hillary's views and legislation regarding children and supporting families.

Update: Since the post was first published in early May, more material is in circulation. For example:

1) Not only did Hillary and Bill do date nights, Hillary wrote in her 1996 book It Takes A Village about adopting the idea of Family Home Evening to her own family.

2) More journalists are delving into the ways Hillary is a social justice Methodist, steeped in the teachings that love, kindness, and hard work can change the world.

3. Bill Clinton's convention speech about the real Hillary highlights all the reasons I like Hillary more than Bill: her diligence, her attention to detail, her quiet focus on making things better in small but significant ways. Hillary's work on the Children's Health Insurance program is, quintessentially, "by small and simple things, great things are brought to pass," translated into the political sphere. There are also stories like this one about incidents of Hillary's pastoral care.

Hillary Rodham Clinton is a woman of accomplishment who is one of the most qualified candidates for president in U.S. history. The case for and against voting for her goes well beyond these issues. However, talking about these aspects of her biography will stand the greatest chance for changing the opinion of folks who are most familiar with conspiracy theories about the tragic death of Vince Foster. (As a Delawarean raised in a politically moderate home, I wasn't aware of these conspiracy theories until a fellow missionary very eagerly shared them with me in 2004.)

So will Utah vote for Hillary in November?

Here's why this is an interesting question:

Despite Utah's solid red status, Mormons despise Trump, and there many good reasons for Latter-day Saints to not vote for him. The last time Utah voted for a Democratic president was 1964, when Utahans picked LBJ over fellow Westerner Barry Goldwater. The Johnson campaign tacked hard to the center, running ads like this one:

A few weeks after this post was originally published, a new version of the ad (with the same former Republican) was released:

Or, to continue with the Harry Potter theme: 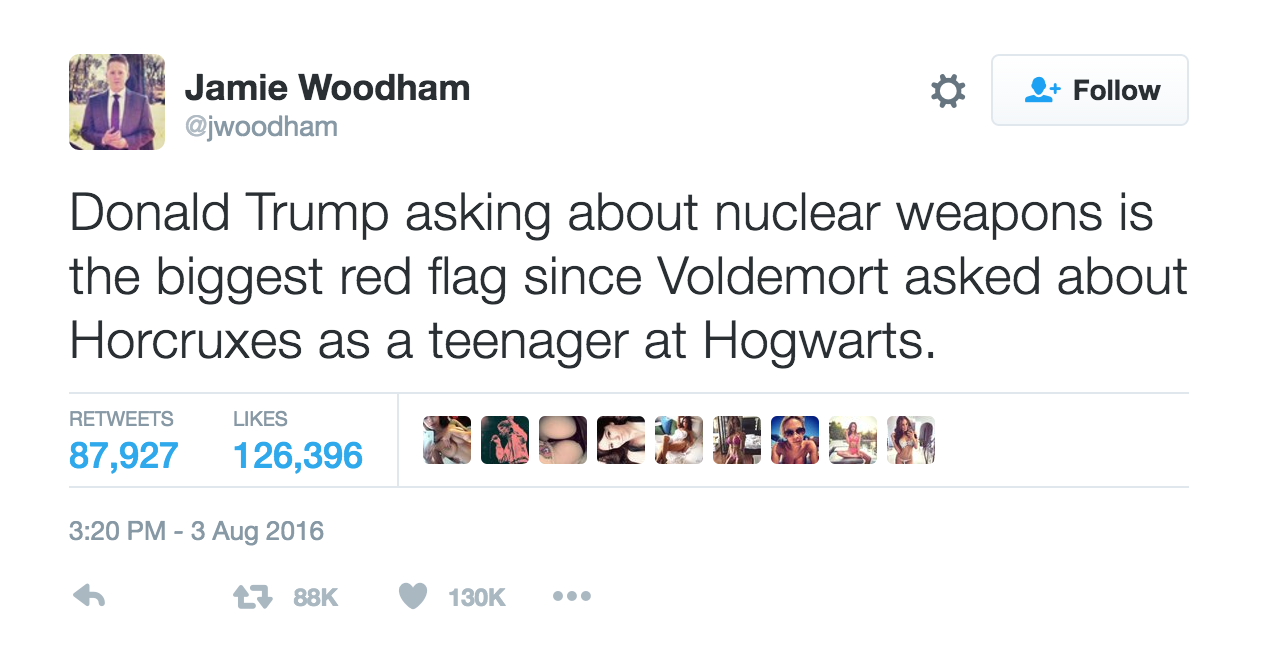 So on the one hand, Trump looks like he will be at least as disastrous a nominee as Goldwater, or at least he should be. He's far less fit than Goldwater (a U.S. Senator) to be the candidate of a major political party. What's more, Mormonism has a strong progressive past.

But on the other hand, the Clintons are notoriously unpopular in Utah and among Mormons in general. In 1992, Bill came in third in Utah behind Bush I and Ross Perot; in 1996, Bob Dole took about 88% of the LDS vote nationally.

But the share of the Latter-day Saint vote going to the Democratic nominee has been steadily increasing, while the percentage of Utahans who are observant Latter-day Saints has been decreasing. And a poll this spring showed Hillary beating Trump 38-36 in Utah. It's possible that with changing demographics in and out of the Church, Utah could swing. And, it appears that the Hillary camp is making a play for the state, including an organizing event on September 12th.

I'll be watching to see how Hillary is portrayed through the remainder of the campaign.

(Other 8/21/2016 updates: This Daily Kos article attempts to match figures from the 2016 election with Harry Potter characters. Hillary is Hermione for them as well. DailyKos also agrees that Trump is Lockhart. I rather like their matching of Christie/Rubio with Crabbe/Goyle. Finally, reading Harry Potter apparently reduces a person's opinion of Donald Trump, even after controlling for political party. Considering how vibrant the Harry Potter fandom was while I was at BYU, I have a new pet theory about why Utah's resisting the siren song of Trump. Also worth noting: in Hillary's Deseret News op-ed, she favorably quoted former Primary general president Rosemary M. Wixom.)