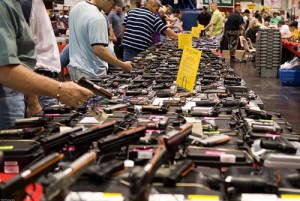 After reading this introduction, you may be surprised to learn that I am an advocate for strengthening the nation’s gun laws, many of which are weak, loophole-ridden, and ineffective. Although violent crime has declined in the U.S. over the past two decades (as it has done so in most developed countries, largely for reasons unrelated to gun control), there is much more we must do to reduce the number of gun deaths each year, which number about 31,000 in the United States. Gun owners and advocates must recognize a need for balance, and with rights, come responsibilities. As arch-conservative Supreme Court Justice Antonin Scalia noted when he wrote the majority opinion in D.C. vs. Heller, “like most rights, the Second Amendment right is not unlimited. It is not a right to keep and carry any weapon whatsoever in any manner whatsoever and for whatever purpose.”

Much of the unfortunately inflamed debate over guns in America surrounds controversial and, in my view, wrong-headed proposals such as an assault weapons ban, or arming of all school teachers. Special interest groups have peddled an all-or-nothing rhetoric that caricatures gun law advocates as people who want to ban and confiscate all guns. Largely ignored in the rancor is a broad policy middle ground that does not involve any bans or confiscations, but strengthens our nation’s ability to keep guns out of the hands of criminals while ensuring the law-abiding can purchase whatever, and however many semi-automatic firearms they please. If these “middle ground” proposals pass, they would not infringe on any law-abiding citizen’s right to own and bear arms, because, at the end of the day, such citizens can still bring home the weapons of their choice.

If our goal is to reduce gun violence, we must look at the source of guns used in violent crime. ATF data has indicated that, contrary to popular belief, stolen guns only account for 10 to 15 percent of guns used in crimes. The most common way criminals obtain guns is through straw purchase sales, which occurs when someone who is legally prohibited from acquiring a gun has an associate buy it on their behalf. The next biggest source of crime guns are sales made by corrupt at-home and commercial Federal Firearms Licensees (FFLs). Another major source of crime guns are street dealers who either acquire guns via straw purchasers, illegal transactions with FFLs, or via outright thefts. According to the ATF, only about 8 percent of the nation’s retail gun dealers sell the majority of crime guns. Family and friends are another significant source of guns used in crimes. Based on the data, we must focus on reducing straw purchase sales and on prosecuting FFLs that sell guns illegally. While both of these activities are already illegal, current laws are weak, prosecution is difficult, and punishment for such crimes are inadequate.

A summit sponsored by the Johns Hopkins University Center for Gun Policy and Research resulted in specific recommendations to enhance law enforcement agencies’ ability to disrupt straw purchasing, prosecute law-breaking FFLs, and to stem the flow of illegally trafficked guns, including the following proposals:

As is true with any business, when the penalty for engaging in an illegal, but profitable commercial activity is far outweighed by the profits, some will always choose to break the law in order to line their pockets. Gun dealers, especially the estimated 8 percent who sell the majority of crime guns, and who break the law, must be severely punished and be both criminally and civilly liable for fueling America’s gun violence. FFLs must know that a decision to break the law and sell guns illegally is a business-ending one with criminal implications. Special interest groups, such as the National Rifle Association, have consistently opposed proposals such as the ones above because their primary interest lies in representing the gun manufacturing and dealing industries, not regular gun owners.

Reducing illegal sales of guns is one crucial task the nation must accomplish to significantly reduce gun violence, but there are others as well. Most of the recent mass shootings, including Newtown, Aurora, Tucson and Virginia Tech, all involved perpetrators with serious mental illnesses. As I wrote in a previous article, the state of American mental health care is abysmal and there is much that needs to be done to improve it. Some of these mass shootings, including Virginia Tech, Aurora, and Tucson, may have been prevented had information about the perpetrators’ disqualifying mental health conditions had been input into the National Instant Check System (NICS) for gun buyers. States must be mandated to provide such information on individuals with dangerous mental health conditions and federal funds must be allocated to ensure states are able to do so. Some states, especially “red” ones, have been derelict in reporting criminal and mental illness data to NICS.

Background checks, which can be highly effective, currently only cover approximately 60 percent of legal gun sales. The remaining 40 percent of background-check-free, yet legal guns sales, are an enormous loophole which allow felons and the dangerously mentally ill to legally and easily purchase firearms from private sellers at guns shows, online, and elsewhere. Establishing a universal background check system would require a check for all persons purchasing a firearm, whether from a friend, an uncle, or a from a private seller at a gun show. By facilitating all gun sales through an FFL, all gun buyers would go through the same standard process for a firearm transfer, enabling a proper background check. Is it really a big deal to have to drive a few minutes away to the nearest FFL to buy a gun from someone on Craig’s List? In fact, it should be a comfort to both the seller and the buyer inasmuch as the seller is reassured that the buyer is not a felon or dangerously mentally ill and the buyer is reassured that he or she is not purchasing a stolen gun. The background check system should also be expanded to prevent other dangerous persons not currently prohibited by law from purchasing a gun. These include individuals in the following categories, as recommended by the Johns Hopkins University Center on Gun Policy and Research:

If the U.S. is to get serious about reducing gun violence and preventing future Newtowns, Tucsons, and so forth, advocates for gun laws and gun rights need to find common ground. None of the policy recommendations in this article prevent any law-abiding citizen from acquiring firearms. They involve no new bans on what type of weapon one can purchase. The debate over guns is a complex one and I recognize that there is plenty of room for discussion other subjects such as the proper role of concealed weapons permits and on the requirements a permit-holder must adhere to in order to carry, which I’ll save for another post. A gun-owning society must be a responsible one with appropriate laws and sufficient enforcement to keep guns out of the wrong hands.

Echoing what former President Ronald Reagan said in 1991, when he argued for passage of the Brady Bill, if the passage of these measures were to result in even a small reduction of gun violence, it would be well worth making it the law of the land.