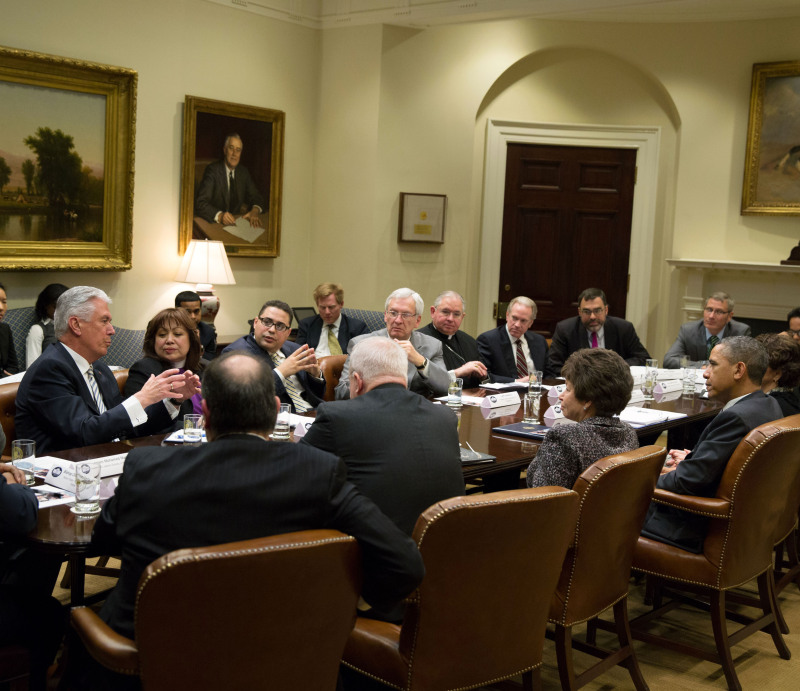 Last week, President Obama announced that because of Congress’s failure to pass a bipartisan immigration reform bill, he is taking executive action to help improve our badly broken immigration system. At the same time, Obama acknowledged that his executive action would not solve all of our immigration challenges and that only new legislation would provide a comprehensive solution. Notwithstanding the fact that many previous Republican presidents used executive actions to reform our nation’s immigration policies, Republicans predictably responded to President Obama’s action with outrage, even though it was House Republicans who purposely stalled on taking up immigration reform after the Senate overwhelmingly passed a bipartisan reform bill in 2013. Among those expressing disdain for the President’s actions are Mormon conservatives. However, if those conservatives understood the position of the Church of Jesus Christ of Latter-day Saints on immigration reform, they would applaud the President’s initiative.

In 2010, the Church issued a press release backing the Utah Compact, an initiative that supports comprehensive federal immigration reform balancing law enforcement with compassion. The following year, the Church took an even stronger stance backing balanced immigration reform and called for “compassion” when considering the plight of the roughly 12 million undocumented immigrants in the U.S. Specifically, the Church advocated reform that would allow undocumented immigrants to “square themselves with the law and continue to work” in the U.S. Despite the Church’s pronouncements in 2010 and 2011, LDS conservatives, including Mitt Romney, continued to advocate unworkable and harsh enforcement-only reforms. (Remember when Romney called for “self-deportation” in 2012?)

In March 2013, the White House invited Dieter F. Uchtdorf, Second Counselor in the Church’s First Presidency, to meet other faith leaders and President Obama in the Oval Office to discuss immigration reform. Reflecting on the meeting, President Uchtdorf observed that Obama spoke of wanting to ensure that the U.S. was “a place where people can come and, once they come, feel not at fear.” Uchtdorf added that Obama’s principles of immigration reform were “totally in line with our [LDS] values.” President Uchtdorf also reiterated the Church’s formal position on immigration reform and encouraged lawmakers to find common ground. “They have to find a compromise. They have to give and take,” he said.

#LDS Pres Uchtdorf: "Breaking up families who've lived in the US for generations as law-abiding, productive neighbors does not seem right."

Nearly three months later, the Senate overwhelmingly passed a bipartisan comprehensive immigration bill with 68 votes. Fourteen Republicans crossed the aisle to pass the bill. It was a rare moment of bipartisan success in an era of bitter polarization. However, immediately after the Senate bill passed, House Republicans were hard at work assaulting the compromise bill and resorted to typical right-wing hyperbole on immigration. It’s now been 515 days since the Senate passed the bill, yet in all that time, the House failed to bring the bill up for a vote even once. The reason for this failure is the "Hastert Rule," an informal rule used by Republicans in recent years which says that the House Speaker will not schedule a vote on any legislation that does not have majority support within the party — even if the majority of House members (including Democrats) would vote to pass it. In contrast, during that period, the House voted numerous times to repeal or defund the Affordable Care Act.

The White House invited President Uchtdorf to a second meeting on immigration with faith leaders in the Oval Office in April 2014. President Uchtdorf told President Obama in that meeting that “our principle... is that we love our neighbor, which means we love all people, in all places and at all times. One of the core values we stand for is families. The separation of families [in U.S. immigration policy] isn't helping.” After the meeting, President Uchtdorf told reporters that “we need a just and caring law balanced with the values and principles that we love our neighbors, that families stay together, and enforce just and compassionate laws... We don't always agree with this administration, for instance on marriage... We very much agree on immigration reform.” President Uchtdorf expressed some optimism that Congress would pass a bill during the summer of 2014. Unfortunately, but perhaps not surprisingly, the House remained obstinate and refused to take action. 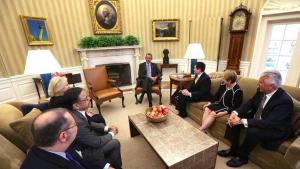 The executive action on immigration announced last week contains critical elements which have repeatedly and consistently been supported by the LDS Church. These include cracking down on illegal immigration at the border, deporting criminals and not families, and ensuring accountability for millions of undocumented immigrants through criminal background check s and taxes. The executive action provides a way for undocumented immigrants who have been in the U.S. more than five years and are parents of U.S. citizens or lawful permanent residents to square themselves with the law. It does not, however, provide a pathway to citizenship. By providing a way for many undocumented workers to remain in the U.S. without the fear of being separated from their families through deportation, President Obama upholds what the Church regards as a “bedrock moral issue” concerning America’s undocumented immigrants- ensuring they are treated with Christ-like compassion.

Latter-day Saints should note that there are many undocumented immigrant Church members in the U.S. who are fully active. President Uchtdorf observed that many of these undocumented immigrants came to the U.S. over the last few decades to work largely in agriculture. “They are bishops in our church, but they never became legal residents because the system was not right for it and all of a sudden we are having changes even though they were more or less invited here to come because their work was needed.” The Church allows otherwise worthy undocumented immigrants to obtain temple recommends and has advised Church members to avoid being judgmental about fellow congregants.

Given the Church’s clearly compassionate stance on immigration, which balances acknowledgement of the need for lawful border enforcement with the desire to keep immigrant families together, Mormons of all political stripes should applaud President Obama’s executive action on immigration and should encourage their representatives in Congress to pass a comprehensive immigration bill.

FACT: Since 2006, 44% of Silicon Valley firms were started by immigrants. #ImmigrationAction #immigration We are a nation of immigrants.