LDS Church: Homosexuality is not a Choice

In an evolution from its past teachings, the Mormon Church launched a new website Thursday asserting that sexuality is not a personal choice.

This evolution is evidenced on the Church's new official website on homosexuality, http://www.mormonsandgays.org/, which states the following (emphasis added):

The experience of same-sex attraction is a complex reality for many people. The attraction itself is not a sin, but acting on it is. Even though individuals do not choose to have such attractions, they do choose how to respond to them. With love and understanding, the Church reaches out to all God’s children, including our gay and lesbian brothers and sisters.

As Coppins points out, this is a rather significant departure from what some Church leaders have previously taught. Others on MormonLiberals.org have received some criticism for posts about homosexuality and marriage equality (this post in particular), with people responding that Church doctrine and beliefs about homosexuality will never change, that it's impossible to believe in the LDS Church and also hope for changes in policies toward our LGBT brothers and sisters.

This development suggests otherwise. One of the core beliefs taught every day by Mormon missionaries all over the world is that this church is led by a living prophet. This means that revelation is a continual occurrence, and that it's not only okay, but expected for positions to change. That's the whole point of having a living prophet--if doctrines, beliefs, and practices never changed, then we'd have no need for a living prophet and could just rely on reading the words of ones who lived long ago.

As Kent Larsen put it over at Times and Seasons, we need to be aware of the rather good chance that current doctrines will be replaced in the future:

Those who taught and believed that race is a qualification for the priesthood were surprised after they entered the next life, weren’t they? Or perhaps those who believed that polygamy is a requirement for the celestial kingdom were likewise surprised, don’t you think? If it isn’t these, then probably it was something else. Like it or not, over time our conception of Gospel Truth has changed a bit. I think the core beliefs are the same—certainly the atonement of Christ, the plan of salvation and our belief in continuing revelation, and more.

If Mormons from the past were wrong about some things, then what will prevent us, today, from being wrong about some things? Regardless of what those things might be, isn’t it likely that we’re wrong about something? We do believe in continuing revelation, so we have to admit the possibility of change in the future, right? And we even believe that humanity, as well as each of us individually, is taught line upon line, precept upon precept, so in the future we should be taught new and important truths, right?

As the missionaries teach, this possibility of change is one of the fundamental beliefs of the Mormon faith. So when people say "the Mormon Church will never change its position on homosexuality," we respectfully disagree. First off, there is no way we can know that for sure. And second, it's no longer a question of whether the Church's position will change, but how much. As is clear today, a teaching that was shared by an Apostle as recently as 2008 (that homosexuality is a choice) has been replaced by another teaching that is the exact opposite of the one originally shared. And that's the whole point of continuing revelation, isn't it?

Larsen concludes with a reminder and a clarification that we echo here in full because of its great importance:

Lest someone misunderstand, I am NOT suggesting that we should not follow the brethren. There are clearly things in the gospel that we should do now, but that are not eternal principles. The general authorities have been given the responsibility for determining what should be done today. They are the Lord’s anointed, and responsible for receiving revelation today. I AM suggesting that we should be humble about how we think about doctrine and patient with the pace of the Church toward perfection. I don’t know why it took so long for the Church to progress to the point where the priesthood ban could be overturned by revelation. But I do see that it took over a century for the correction to be made. Perhaps I should be willing to have patience to that degree, if necessary.

Update: Times and Seasons has an excellent history of the LDS Church's evolution on the issues of homosexuality. 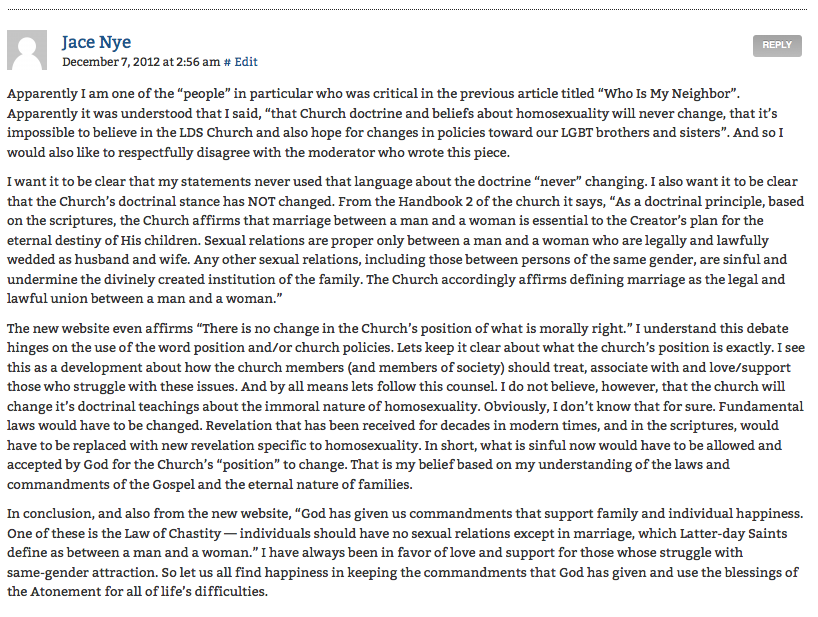 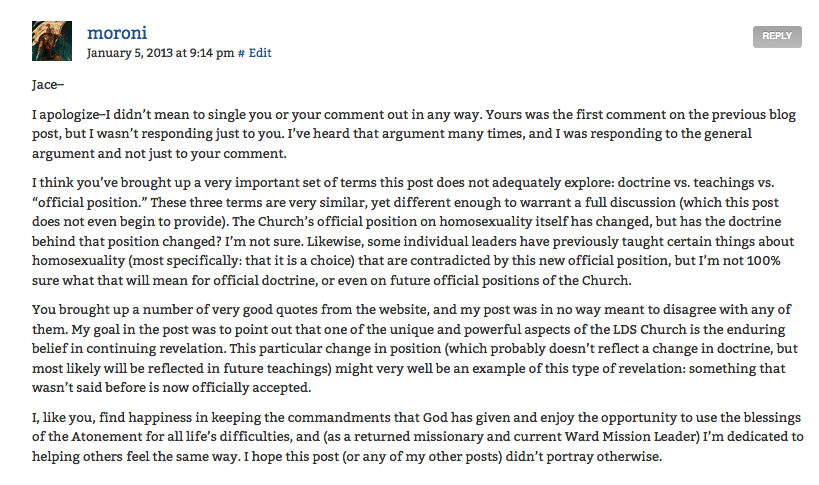 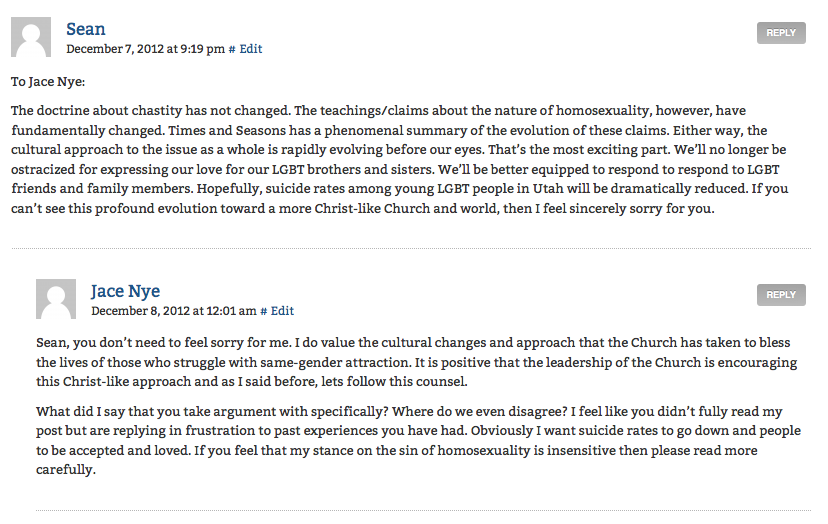 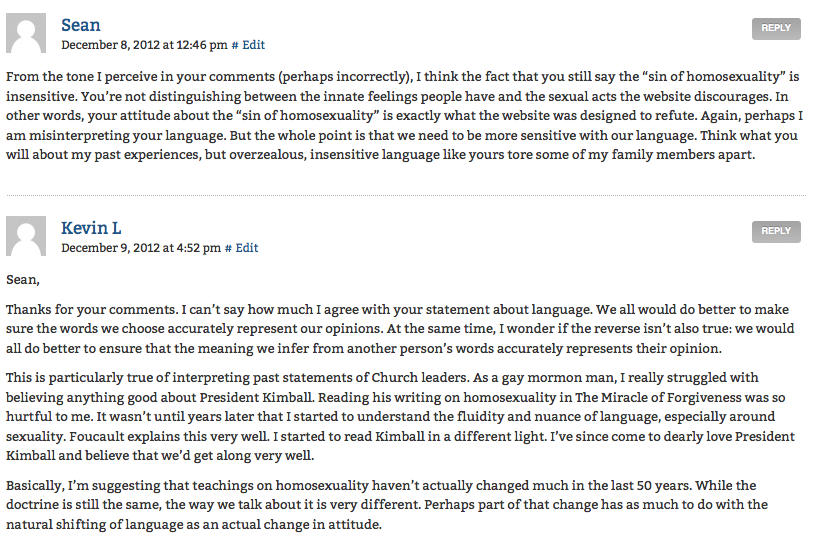 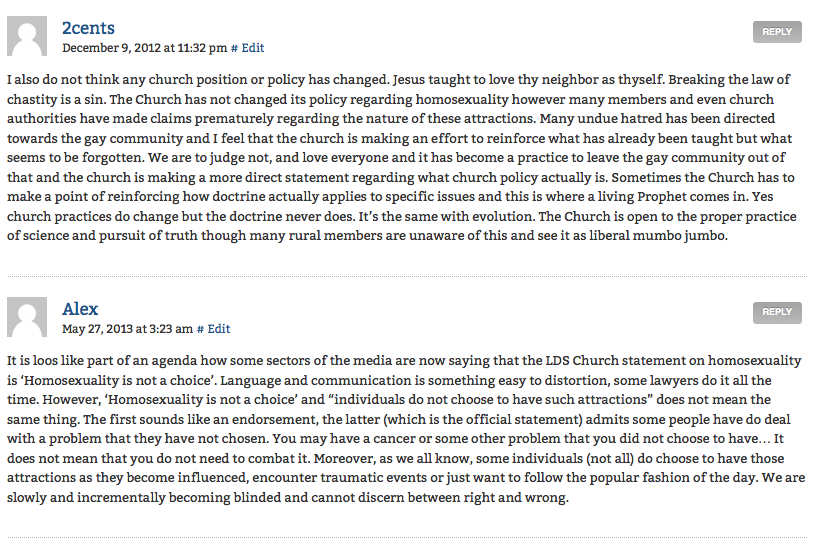 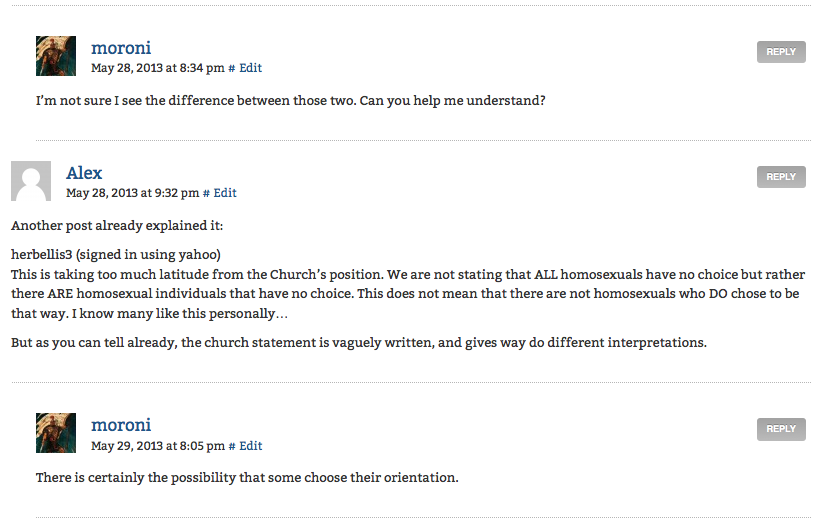