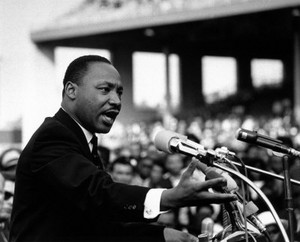 In the spring of 1963, my dad was reassigned to Okinawa, Japan from his post in Chicago as a non-commissioned officer in the Army. I was ten at the time, turning eleven that following November. During the transition my parents decided that my three siblings and me would reside on our grandparents' farm in Louisiana until we were able to join them overseas.  It was that period in my life which provided a clearer understanding of current racial tensions, and created life lessons that continue to influence me today.

We were aware of the troubles and protests going on in Birmingham and other nearby areas, but the time spent in Louisiana provided greater visibility to racial differences. I remember the "colored" water fountains, un-maintained and inadequate, compared to "white" ones which appeared new. I remember going to the movies and using the separate entrance to the top of the theater (remember, hot air rises!).  I remember how my grandfather was addressed as "boy" or "uncle" by the white members of the community. The most troubling memory of that period was the killings of Medgar Evers, a civil rights activist, as well as the four little girls (one was my age) during the 16th Street Baptist Church bombing in Birmingham, Alabama.  I remember President Kennedy's address imploring civil unity, driven by coloreds being blocked from white universities. The pinnacle of the entire summer came with "The March".  I remember anxiously watching the television coverage with friends and family those many long years ago, and feeling energized and proud!

I will always be thankful to the dedication of those who peacefully, both black and white, refused to give up.  As a 60 year old woman, I have the ability to live "The Dream", in all aspects of my life.  Today my husband and I own a pharmacy franchise, employing ten. We were able to obtain small business loans, instead of being rejected based on the color of our skin. We went to integrated schools, never enduring the demeaning act of busing. There were times when we were judged by our color, and not the content of our character, and we dealt with it.

Our family is now racially intertwined, including white or half-white sons-in-laws with wonderful grandchildren.  We shed tears when the first black president was nominated validating the civil rights movement of the 1960’s and beyond. We taught our children the lessons we lived. Now they teach theirs to be thankful to those who struggled, marched, and sometimes died.

I am still bothered by ignorant and sometimes malicious talk from those who believe racial parity has been achieved. Racism still exists within our lives, even within our stable, sustaining family. When events like MLK50 take place, we should all take the time to reevaluate our behavior, regardless of our political persuasion or personal perceptions. In a society constantly bombarded by racial half-truths, it is time to come together and act for all, not just the selected few. I will always remember what the summer of 1963 taught me. As a first hand witness to a civil revolution that carries on today, it amazes me how far we have come, and reminds me what more needs to be done.