Throughout the GOP primaries Newt Gingrich has mentioned the name of Reagan 3.2 times per debate. He continues to invoke his name trying to piggyback on his popularity and drive association with The Gipper. The other candidates have not exhausted this approach to the level of the previous Speaker, which is ironic given Mr. Gingrich constantly disagreed with President Reagan’s politics. To Mr. Gingrich I say, you are no Reagan...and for that matter, Reagan was no Reagan.

The conservative movement holds up President Reagan as a beacon of light, an example to all Republicans. The Tea Party themselves use Reagan's name as a synonym for deity. Certain forgotten (or ignored) facts about our 40th president make this name jockeying borderline laughable. Reagan was not a small government Republican, nor would he be a friend to the Tea Party today. Reagan’s mix of compromise on positions and issues changed with experience, and would drive today’s Republican Party crazy. Many have forgotten that Reagan began his political career as a liberal Democrat. His conversion to the conservative movement came upon marrying his second wife, Nancy, and through the presidencies of Eisenhower, Nixon, and influence of Goldwater. Although Reagan campaigned on conservative principles, he did raise taxes both as Governor and President to balance the budget. Adjusted for inflation those tax increases were the largest the country had ever seen.

Reagan’s social platforms would disqualify him from today's Republican Party. Ronald Reagan was borderline religious and there is very little record of him attending church before, during, or after his presidency. Reagan saw the Christian faith as a buffer to communism and used religion as a weapon. One of the first bills Reagan signed as Governor of California was the “Therapeutic Abortion Act” which led to two million abortions in the state. Reagan signed the first “no fault” divorce legislation and is still the only divorced President that has led this nation. Reagan was also vocal in opposing a California initiative that would have banned gays and lesbians from working in public schools. Reagan signed an amnesty bill that provided citizenship to three million illegal immigrants understanding the labor impact to our Nation’s economy. It is difficult to believe that Reagan would be supportive of building walls around our borders, while working to tear down walls in Eastern Europe.

To be fair, Reagan campaigned on values aligning with the conservative movement including smaller government, strong defense, less welfare, lower taxes, and less government in people’s personal lives (Patriot Act would have been DOA). On several of these principles he was true to his core. Unions weakened under Reagan, taxes were lowered, and defense spending flourished. Perhaps the most notable anti-Union action came with the firing of 12,000 governmental air traffic controllers who went on strike, which empowered the private sector to overcome their fear of unions. Many have called Reagan an economic mind, but there is no substantial evidence to back such a claim. His embracing of supply-side economics demonstrates his weakness in this area and the real economic genius of the period was Paul Volcker (today, Mr. Volcker serves on President Obama’s economic policy board, and has been written off by the same conservatives who embraced his policies in the 1980’s). Reagan did understand the conceptual idea of the Laffer Curve which drove Reagan’s desire to lower taxes. Reagan also froze the minimum wage, a move that is supported by free market theory. 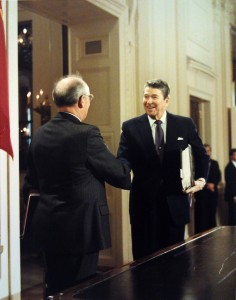 Reagan’s popularity was based on the same reason Newt Gingrich loathed the man, his ability to compromise and to respect his political opponents. It is not a secret that President Reagan’s biggest political opponent was Speaker of the House Tip O’Neil. Nor was it a secret that when working hours were over the President would have opposing Democrats over for a beer. One time after a feud President Reagan called O’Neil up for a truce in which the Speaker replied, “Old buddy, that's politics--after 6 o'clock we can be friends; but before 6, its politics.” O’Neil passed Reagan’s tax cuts and Reagan signed O’Neil’s social programs. Although partisanship was starting to build in Washington it was Newt’s frustration with the compromising hand of Reagan that led him to construct “The New Deal”. Newt was no Reagan Republican, opposing President Clinton at every turn, even to the point of shutting down government. The rise of extreme partisanship was beginning and Newt was the architect. Reagan’s reelection was a monstrous landslide in 1984, and his popularity was driven through his ability to unite both parties.

Reagan’s management of the cold war is also a stark difference to how Newt and Republicans think today. At the near conclusion of the Cold War President Reagan met with Mikhail Gorbachev, the leader of communist Russia. This infuriated Newt and others from Reagan’s own party. Reagan and Gorbachev agreed to disarm and worked together to remove nuclear arsenal across the globe. Reagan and Gorbachev surprised both of their countries with the agreement and compromise was the pinnacle of Reagan’s success. Given the tone and rhetoric from the right today, it is safe to say Reagan would have been portrayed as weak and an enemy to the United States.

For Newt and other Republicans who use Reagan’s name as a political weapon I would say, stop. Reagan would not be your friend today. The Republican Party would not embrace his compromising spirit, economic and tax policy, and perceived weak positions on social issues. In the 2008 primaries, Obama and Clinton argued about who could come to the middle. Today, the Republican Party members are arguing about who can move furthest to the right. There is little question which of these positions Reagan would support.