I smile every time a pundit tries to link escalating gas prices to our president.  Not because I am satisfied with the erroneous connection, but out of amused exasperation at the hypocrisy that continually plagues polarizing talking heads.  Gas pricing is a function of market dynamics, meaning that it is driven by supply, demand, and speculation.  Any action by President Obama to influence pricing would be governmental regulation, which opposes conservatives’ fundamental advocacy of smaller government.  The only organizations that can truly impact pricing are the oil companies whom our tax dollars continue to subsidize.  Domestic oil companies are set to rake in windfall profits as pricing continues to rise.  It’s time to ask for those subsidies back.

Most Americans do not understand that half the oil consumed by the United States is produced within its borders.  The United States consumes almost 18 million barrels daily (MBD), of which 9.1 MBD comes from our own drills.  We are the largest oil consumer in the world, using 22 percent of total global production. We are also the third largest producer of oil, just behind Russia (9.9) and Saudi Arabia (9.7).  The other half of U.S.-consumed oil is imported from several nations.  The  largest exporter of oil to the U.S. is Canada, which accounts for 2.3 MBD.  Saudi Arabia, Venezuela, Mexico, and Nigeria are all next in line, with each exporting roughly 1 MBD.  Surprisingly, and despite all the rhetoric, Iraq ships just 400,000 barrels a day, a mere 2 percent of our total oil consumption.  In total, the United states only receives 10 percent of its total oil supply from the Middle East.

So if the U.S. consumes oil almost exclusively from North America, how does the Middle East impact pricing?  What consumers need to understand is that the largest global producer of oil has the greatest control on pricing.  Even though the United States receives only 10 percent of its imported oil from the Middle East, that region of the world accounts for 30 MBD, or 34% of global oil production.   The Organization of Petroleum Exporting Countries (OPEC) is a cartel of participating countries that unify production and pricing to maintain greater control of supply and demand.  OPEC supplies the majority of oil to the world’s Eastern Nations (China, Japan, India, etc). 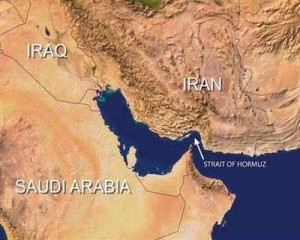 So why are gas prices rising?  Bordering Iran is the world’s greatest natural choke hold of oil transportation.  Almost 17 MBD pass through The Straits of Hormuz on their way to consuming nations.  Iran has threatened to close the Strait, which would result in incremental increases in cost to transport oil out of the region.  Since OPEC nations control the largest collective supply, any price increase due to their control will impact the worldwide marketplace.

American oil companies do not have to raise prices as no incremental production costs are being reflected, as in the Middle East.  The problem is increased market demand for cheaper U.S. oil can drive prices up (i.e. China would prefer to buy our cheaper oil instead of OPEC’s more expensive offering).  U.S. companies understand competition, and would much rather raise pricing with OPEC than undercut competition in the short term.  Why?  Oil is highly inelastic and consumers will pay for gas regardless of price.  Over the next several months, as oil prices stay high, U.S.-based oil companies will deliver some of the most profitable quarters for their shareholders, taking full advantage of Middle East instability.

There is no better time to withdraw the subsidies our government pays to domestic oil companies.  Each year domestic oil companies take $4 billion of taxpayer dollars and add it to their bottom line.  As noted previously, subsidies have no impact on domestic oil prices, nor does increasing U.S. production through additional drilling.   Any incremental oil production will be sold at the market prices, regardless of those subsidies, unless companies are willing to break away from OPEC direction.  As gas prices continue to climb at the pump, understand that capitalism is in full swing.  Oil company shareholders could not be happier, and they should thank both Iran and the American taxpayer.