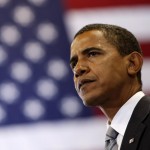 In 2008, President Barack Obama was elected into one of the worst economic disasters since Franklin Roosevelt stepped into the Oval Office. The United States economy was shedding approximately 800,000 jobs per month. Home foreclosures were skyrocketing and the stock market plummeted. From continuing the Troubled Asset Relief Program (TARP) and the Recovery Act, to the emergency bailout of General Motors and Chrysler, policies pursued by the Obama administration and the Federal Reserve put a floor on the recession and returned the economy to sustained growth. The GDP growth rate turned from negative 5.3 percent during the first quarter of 2009 to positive growth by the third quarter. Today, the unemployment rate is lower than it has been at any point during Obama’s term in office led by 31 consecutive months of private sector job growth. The stock market indices more than doubled from their low point, observed just six weeks after Obama took office. Corporate profits of the Fortune 500 reached an all-time high in 2011 and consumer confidence is now higher than it has been at any point since 2007. The housing market is recovering, with home prices, sales, and construction rates rising significantly in 2012. Even though the Obama administration’s handling of the economy has not been flawless, their accomplishments have been impressive given unprecedented partisanship in Washington.

Equally impressive is the fact that the Obama administration’s economic policies aided a recovery while lowering the federal deficit. Obama inherited a $1.4 trillion annual federal budget deficit (10.1 percent of GDP) during his first year in office, but the deficit is projected to be only 7 percent of GDP in 2012. Even though our national debt remains a grave challenge, a second term would grant the President the political capital necessary to negotiate a balanced compromise. The administration also put into place significant reforms of the financial sector that will help prevent a similar financial crisis in the future by regulating the derivatives market.

President Obama’s signature on the Affordable Care Act (ACA) in March 2010 fulfilled a near-century-long quest to establish a system of universal health care in America. ACA is a conservative, market-oriented universal health care system that was previously championed by many Republicans and was modeled after Governor Mitt Romney’s Massachusetts health care reform plan. ACA does not add to the deficit (but it’s repeal would) and it helps low-wage workers and their families, who comprise most of America’s uninsured, obtain medical coverage while removing some of Medicaid’s perverse incentives. Paradoxically, ACA has been highly controversial even while most of its features are wildly popular, including the provisions that end insurance companies' ability to discriminate against people with pre-existing conditions and to impose caps on annual or lifetime health benefits, as well as the clause that allows parents to keep their children on their insurance plans up to age 26. This is partly due to a deliberate effort by Republicans to deny the President with a major legislative achievement and the unrelenting rightward drift of the GOP as a whole. ACA did not go far enough in controlling skyrocketing health care costs; however, the rate of health insurance premium increase has slowed to a historic low this year. And this news arrives even before the central component of ACA, the insurance mandate, goes into effect, which will put significant downward pressure on the rate of insurance premium inflation. Obama’s signature domestic achievement, ACA, is a major step in the right direction for improving the American health care system.

President Obama has delivered other achievements on the home front, including major successes for equality and human rights. The repeal of the military’s discriminatory Don’t Ask Don’t Tell (DADT) policy brings us one big step closer to living the ideal set forth in the Declaration of Independence, that all men and women are created equal. Studies since the repeal have shown that there has been no significant negative impact to the military, contrary to what most Congressional Republicans had warned. Also, the Lilly Ledbetter Fair Pay Act of 2009, which was the first bill President Obama signed into law, goes a long way to help ensure that women receive equal pay for equal work.

The President’s recent executive order, which gives reprieve from deportation and an opportunity for work authorization to undocumented immigrant children who were brought to the U.S. before they turned 16, is an important first step to overhauling our nation’s badly broken immigration system. Like his predecessor, President Obama supports a comprehensive approach to immigration reform that provides both a pathway to residency for undocumented immigrants while improving border protection and enforcement. However, an ever-more right-wing Congressional Republican caucus, which revolted against George W. Bush’s push for a comprehensive overhaul of our immigration system, refused to consider any immigration legislation that did not have a narrow enforcement-only approach.

President Obama saved both students’ and taxpayers’ money when he reformed the student loan program and enabled the federal government to provide loans directly to students rather than going through a costly middle-man. The Race to the Top initiative in the Department of Education has received bipartisan praise for spurring innovative reforms of public education in many states.

On energy, the U.S. is now less dependent on oil than it has been in generations. While a domestic oil boom contributed significantly to this phenomenon, the Obama administration has made key investments in renewable energy, helping the U.S. to double its production of wind energy while increasing solar energy by six times. Obama’s all-of-the-above approach to energy included conservation initiatives such as the new fuel efficiency standards that will nearly double the current fuel economy of American automobiles by 2025, and approval to build the first nuclear power plant in the U.S. in decades. Although climate change has unfortunately not been a serious political issue during this election cycle, the threat remains and the President’s comprehensive approach to energy stands in stark contrast to Governor Romney’s more traditional, yet myopic approach that heavily favors fossil fuels.

President Obama and his national security team helped navigate an exceptionally turbulent period in the Middle East and around the world. Obama fulfilled one of his most important campaign promises in December 2011 when the last U.S. troops departed from Iraq, ending one of the most serious American foreign policy blunders in generations. President Obama's counterterrorism policies have been tremendously successful. As he promised in 2008, Obama refocused our war effort on al-Qaeda and their allies in their safe havens in Afghanistan and Pakistan, decimating their leadership, and is now in the process of bringing a responsible end to the war in Afghanistan. Most notably, Obama ordered a high-risk Navy SEAL operation that killed Osama bin Laden in Abottabad, Pakistan in May 2011, striking an unprecedented blow against the terrorist organization responsible for the September 11 attacks. Admiral William McRaven, the military commander over the bin Laden raid, said afterwards that President Obama “was at all times presidential” and had exemplified “leadership skills we’d expect from a guy who had 35 years in the military.”

In other parts of the Middle East, the Obama administration stood for American principles when they sided with pro-democracy uprisings across the region, particularly in Egypt, Libya, and Tunisia. Mr. Obama helped form a successful military coalition, which included several NATO partners and some Arab countries, that helped to prevent Libyan dictator Muammar Gaddafi’s forces from massacring his own people and eventually led to his overthrow. President Obama’s national security team put tremendous pressure on Iran and its nuclear ambitions by mustering global support for the toughest multi-lateral economic sanctions ever enacted against Iran. The sanctions have led to the most serious economic crisis Iran has faced since the devastating Iran-Iraq war of the 1980s.

Mr. Obama negotiated and signed into law a new nuclear arms treaty (new START) with Russia that further reduces nuclear stockpiles on both sides while putting into place a modern weapons decommission verification system that will allow the U.S. to better monitor Russia’s implementation of the agreement. The new treaty won near universal praise from Republican and Democratic security experts. The Obama administration’s successful approach to diplomacy and national security has not only delivered tangible successes like the ones mentioned above, but it has helped to heal alliances that were tattered by the callous approach to world affairs of the previous administration. Global views of the U.S. have risen significantly since President Obama took office.

We have not agreed with all of President Obama’s actions and recognize that not all of his policies have been completely successful. Nonetheless, the President and his team were able to implement numerous reforms that have made a positive impact on our nation. The President has provided steady, consistent, and smart leadership during the most challenging period in decades. Mormon Democrats proudly endorses Barack Obama for re-election. He has earned another four years in office.