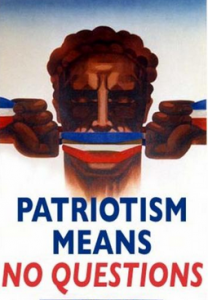 Across the U.S., conservative-dominated school boards have sought to manipulate public education curricula by overruling relevant experts in subjects such as history, economics, and science, establishing requirements to teach subjects through a conservative lens, and via outright censorship. In 2010, the Texas Board of Education approved a social studies curriculum that questioned the Founding Fathers’ commitment to secular government and presented conservative political philosophies in a positive light. Astonishingly, the school board cut Thomas Jefferson from a list of figures whose writings inspired revolutions across the world in the 18th and 19th centuries and replaced him with religious figures such as St. Thomas Aquinas and John Calvin because the board members disliked Jefferson’s support for separation between church and state.

"I have sworn upon the altar of God eternal hostility against every form of tyranny over the mind of man." - Thomas Jefferson

More recently, in response to a revamped history curriculum by the Advanced Placement (AP) board, which de-emphasizes rote memorization and focuses on critical thinking, the Jefferson County, Colorado School Board proposed establishing an AP history curriculum review committee that would ensure AP history was taught in a manner to “promote citizenship, patriotism, essentials and benefits of the free enterprise system, respect for authority and respect for individual rights.” Additionally, the curriculum review committee would ensure that Jefferson County’s history curriculum would not “encourage or condone civil disorder, social strife or disregard of the law.”

The distinctly partisan language of the proposal makes it clear that the Jefferson County school board seeks to promote conservative ideology and unbridled American exceptionalism while ignoring important crises that are just as much a part of our nation’s history as the signing of the Declaration of Independence. How would an ideologically-driven history curriculum that seeks to avoid encouraging or condoning civil disorder cover important topics such as slavery, women’s suffrage, McCarthyism, racist Jim Crow laws and the Civil Rights Movement? Quite likely, it would gloss over these key areas. Does the Jefferson County School Board not realize that the events leading up to the American Revolution largely included civil disorder, social strife, and disregard for British law?

Laced with a political agenda, the Jefferson County AP history curriculum proposal eerily parallels one-sided jingoistic indoctrination systems prevalent in countries like North Korea, Russia, or Cuba. History given from only one perspective is not history at all; rather, it is propaganda aimed at indoctrination. History, properly taught, does not “promote,” “encourage,” or “condone” any particular perspective. History should be taught following well-established academic standards that encourage students to understand the importance of multiple perspectives and historical context. I grew up learning about all aspects of American history, including the genocidal treatment of the Native Americans and African slaves, and the consequences of unbridled capitalism. Yet, in learning how our country was founded, how our society overcame many of its ills, and triumphed over fascism and communism, I developed a keen sense of patriotism, albeit with a healthy understanding for our shortcomings. As one Jefferson County student observed, “the negative parts of American history aren't necessarily unpatriotic. We need to know those things so we don't repeat them in the future."

The proposal immediately sparked protests by teachers and students who did not want to see their history classes censored. This battle between a right-wing school board and the student body and many teachers almost immediately captured the attention of the national media. Ultimately, while the school board rescinded some of the most inflammatory language from the original proposal, they still voted to create the history curriculum review board. Fortunately, the Collage Board, which administers AP exams, has warned that any school or district that censors essential concepts from an AP course will be prohibited from bearing the “Advanced Placement” designation.

The actions of the Jefferson County School Board and the Texas Board of Education, among many others, are further evidence that our constitutional democracy is threatened by an extreme conservative ideology that prefers propaganda over education. By indoctrinating our youth with a conservative-slanted version of history and eliminating other perspectives, they hope to further entrench their paradigm in American society. Stifling dissent, whether it be through voter suppression, unlimited corporate influence in elections, or propagandizing of our public education system, threaten civil society and democratic government.