Representatives: Are They Really Representing? 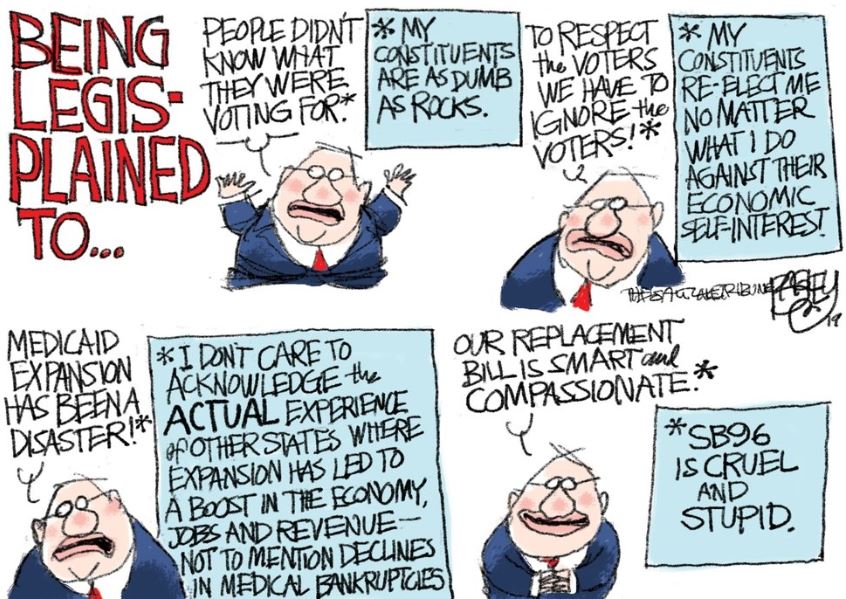 Last Wednesday I decided to dig myself out of the biggest snowstorm in 26 years, take time away from work, and head up to Capitol Hill in Salt Lake City to add my voice to the tens of thousands who have already come out against Senate Bill 96, which guts *proposition 3 and costs more.  I walked into room 445 of the capital, sat in the front row, right in the center so I would have the chance to testify.  I never did get that chance.

First came the sponsoring Senator Christensen (R) introducing his bill to the committee.  He made the changes seem reasonable, fiscally responsible.  Then questions came from committee members who disagreed with him.

Representative Duckworth’s (D) major argument for expansion according to proposition 3 is this: for every $1 we spend, the federal government infuses $9 into the state's healthcare infrastructure.  Because we haven’t implemented the expansion, we have kept this money out of our economy.  She asked, "Is this really fiscally responsible to refuse this money?"

Representative King’s (D) major argument against the bill was the difficulty in getting the waivers from the federal government.  His question was: could we really get a waiver by April 1, which was the mandated timeline from proposition 3?  No-one could say yes, because no-one knows.

Sen. Christensen answered with a folksy, "I’d bet the farm on this."  Unfortunately, he’s not betting the farm on this; he’s betting lives, hospital visits, care, delays, immunizations for children, preventive well-child visits that end up being emergency-room visits, among so many others.  It isn’t even his farm he’s betting; it’s ours.

Rep. King continued making the point that other states have figured out how to manage the costs of Medicaid expansion and are successful.  We can do the same.

The message from the Democrats was clear: Let’s respect the voice of Utah voters and figure out a way to get them what they voted for, not undo it without even giving it a try.

Representative Schultz (R) kept bringing up what he regarded as misinformation campaigns – suggesting that the people of Utah were duped into voting for this.  Voters came forward to voice their opposition to repealing the proposition.  Rep. Schultz asked three of them about an advertisement none of those people had seen, and not one was responsible for.

These exchanges indicated to me that Rep. Schultz thought Utahns were tricked into voting for the proposition and weren’t smart enough to research what they voted for.  Rep. Schultz based his claim of Utah voters being duped by an advertisement none of the voters present that day had even seen.

When the time came for favorable recommendation by the committee to move the bill to the house floor, every Democrat and three Republicans voted no against nine Republicans voting in favor.  I looked up each of the representatives and how their districts voted regarding proposition 3.  54% of the committee members districts voted in favor of proposition 3, which is almost representative of how the state voted.  Yet the 60% of the committee voted in favor of repeal – contrary to the desire of Utah voters.

After adjournment, I approached Mr. Quinn to point out that 59% of his district had voted in favor proposition 3, and he just voted to send a repeal bill to the house for a vote.

“You don’t understand how this process works. We need get it out of committee and onto the floor,” was his reply.  Maybe he didn’t realize that he had just given a favorable recommendation to the floor, and it could very well pass based on his recommendation.

Next to him, Mr. Schultz also decided to add his two cents saying, “The voters were wrongly advertised to and were duped into thinking this was a good idea.”

After a few more remarks back and forth, I left realizing that two representatives, who are supposed to represent my interests, just called me and Utah voters naïve and uninformed.

Senate Bill 96 passed the full house and Senate on party lines yesterday: Republicans in favor of repeal and Democrats opposed.  I called the Governor asking him to veto it; he signed it into law yesterday afternoon.

I’m sure there is some deeper meaning to all this if I philosophically analyze everything that happened.  What I did learn is that the Democrats I met in our state legislature respect us and the Republicans do not.  Maybe before checking the Republican for everything block when voting, actually look at the candidate and select the one who respects you, your voice, and your position.

*Proposition 3 was a ballot proposition to expand Medicaid in Utah to give medical assistance to those up to 138% of the poverty line.  These are people who do not qualify for subsidies under the affordable care act because they make too little, and they do not qualify for Medicaid because they make too much.  Fifty-three percent of Utahns voted for it.

Cartoon Credit: Pat Bagley.  I got permission via Twitter to use his cartoon for this article.  The cartoon is published here.