Response to WBMW on the "Moral Rape" of the United States 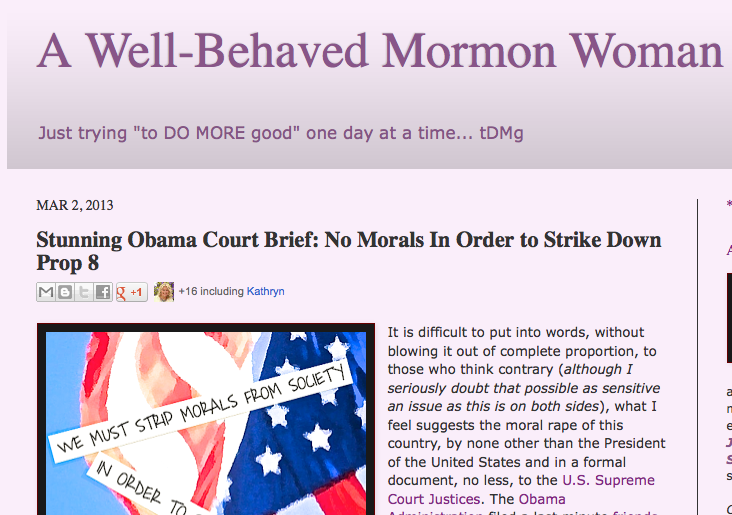 A recent post over at the blog "A Well-Behaved Mormon Woman" caught my eye. The post is titled "Stunning Obama Court Brief: No Morals In Order to Strike Down Prop 8." If you haven't read her post, head on over and check it out and then come back for my thoughts and response.

The author, whom I respect greatly and value as a fellow Mormon as we both try to make our way in the world, begins with a harsh assessment of the Obama Administration's filing of an amicus brief in favor of marriage equality. She says

It is difficult to put into words, without blowing it out of complete proportion . . . what I feel suggests the moral rape of this country, by none other than the President of the United States and in a formal document, no less, to the U.S. Supreme Court Justices.

This "moral rape," she goes on to say, is that "according to the Obama brief, if the Court has no "precedents", they, like society, must rule void of moral judgement." The Obama Administration argued that the Supreme Court should not use moral beliefs as the sole reason for upholding or striking down a law. Personally, I fully agree with this argument. I could imagine a situation where this would work in my favor, actually:

Let's say my family and I live in a town that is predominantly Catholic. And let's say that, because the Catholic Church believes birth control to be sinful, the town votes a law into place stating that birth control is illegal and that anyone found in possession of any form of birth control is to be thrown in jail. For them, this is a moral issue. For me, it is also a moral issue: my Mormon faith teaches me that decisions about birth control are entirely up to a husband and wife. No one else is allowed to intervene in this sacred relationship. And I would certainly hope that the Supreme Court would not rule in the town's favor, forcing me to live by their morals for no other reason than that they're their morals.

And this is precisely what the Obama Administration seems to be arguing: just because a bunch of people hold certain morals doesn't mean that those morals are as legally binding as the Constitution (which many believe was divinely inspired, anyway). There's nothing preventing my Catholic neighbors from living by their morals, and opposition to a Court order commanding me to abide by their morals is not a "moral rape" at all, but a protection of the rule of law. And a protection of the 11th Article of Faith:

We claim the privilege of worshiping Almighty God according to the dictates of our own conscience, and allow all men the same privilege, let them worship how, where, or what they may.

Because of this, I am confused when the author of the blog post claims that the "liberal agenda" (her words) is to essentially do the will of Satan on this issue:

How unfortunate indeed, and yet in the scheme of things a perfectly fair move on the part of the Adversary, according to the rules of mortality as laid out in the great Plan of Salvation; featuring...  drum roll please....  the agency of man! Ta da!

Of course, we've already covered the issue of politics and agency quite thoroughly and stand by our belief that government legislation simply cannot remove, restrict, or take away anyone's agency. But the larger point deals with the idea that it is morally bankrupt to oppose an enforcement of morals solely on the grounds of morality. There are many many issues I believe are moral issues and yet I do not think should be enforced by law. I believe in the Word of Wisdom, and yet I don't believe we should pass laws banning coffee. I believe in the law of chastity but I don't believe we should pass laws banning fornication. I believe with all my heart in the moral issue of sharing the gospel, but I certainly hope no one ever suggests that missionary work be required by legislation. And does that mean I, and the Mormons who agree with me, have no morals, or that we're fighting on Satan's side?

According to A Well-Behaved Mormon Woman, apparently it does.