I'M STILL HERE: THOUGHTS ON THE 50th ANNIVERSARY OF MEDICARE AND MEDICAID 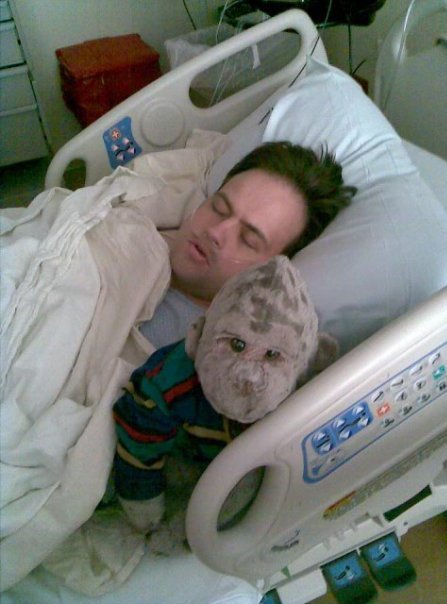 This Thursday, July 30, marks the 50th anniversary of the enactment of Medicare and Medicaid, and for me it’s a deeply personal occasion, made all the more poignant by its placement very close to the sixth anniversary of my kidney transplant.  Because this is so personal to me, rather than simply discuss the history of these programs or discuss facts and figures relating to their status today, I want to talk about my personal experience with them, and tell you why they mean so much to me.

At the time that I was diagnosed with end stage kidney failure, I was working part-time for a science education facility and as a part-time actor, going to college part-time, and was a full-time care provider for the two greatest kids in the world: my niece and nephew. My sister and her husband both had to work full-time to support their family, so I was living in their basement and helping pay rent while taking care of the kids. None of these things gave me access to health insurance. But I qualified for both Medicare and  Medicaid (one of the small number of circumstances which makes a person younger than normal Medicare eligibility age eligible is end stage kidney failure).

Without these programs, I wouldn’t be here today. That’s a statement that makes some people uncomfortable, and they try to dispute it, because they consider programs like these “socialism”, which in their minds is a term with no degrees or nuance and therefore any kind of social program automatically equals a full-scale Stalinist regime that oppresses its people and murders anyone who disagrees with them. The people who think this way refuse to consider the idea that Medicare and Medicaid were essential to keeping me alive, and sometimes they’ll attempt to give explanations for how I could have gotten the lifesaving healthcare I needed without it. Most of these ideas involve forms of charity, and since I did receive help from charitable donations many people still think that’s why I survived.  I certainly benefitted from charity, and would never dismiss it’s importance. Friends, family and colleagued organized fundraisers, and  had a far beyond average degree of success. But all of the various fundraising efforts ended up totaling about  $10,000 to help me.  Of course this is amazing and wonderful, and the financial burden without them would have been severe. This money helped to pay the share of the medical bills still left, and most importantly helped compensate for the temporary absence of the money I would have been bringing in if I could still work. The surgery wouldn’t have been worth much if I didn’t have a place to live while waiting for it and recovering from it (as I mentioned before, though I was living with family I was paying rent and contributing to other expenses. The lack of my paycheck took a big chunk away from an entire family, not just me). But it’s important to understand that this was a $79,000 surgery. And I required an additional surgery to remove my infected original kidneys. And after that, there was the matter of the anti-rejection medications I’ll have to take for the rest of my life. The cost of these per month roughly equals the cost of renting a two bedroom apartment in Los Angeles. While I'm blessed to belong to a church that goes above and beyond to help its members, does anyone really think the Church could have paid for a $79,000 surgery? Help for members comes through Fast Offerings, and what ward has $79,000 in its Fast Offerings fund?

I was not able to return to work immediately after the surgery. Aside from the six weeks needed for recovery, it took a long time to get the levels of my medications right to manage the side effects and complications they can cause. Some new issues and problems took months to diagnose, and some never were satisfactorily diagnosed. For about six months I had muscle weakness and shooting pains which would start in my ankles and go up to my hips and cause me to literally scream with agony. It took an entire year just to make progress on gastrointestinal issues which caused me severe pain and discomfort, and made it next to impossible to work a regular schedule because, frankly, I didn’t really have control of my bodily functions. It took almost two years before I really hit a point where I could be truly confident in my ability to work, and these issues still re-occur from time to time. It took four years to discover that what likely caused the lifelong chronic kidney problems in the first place was a problem with the function of my bladder, which requires special medical supplies to deal with and is also likely permanent, and has forced me to figure out making some big adjustments to deal with incorporating this uncomfortable procedure into my daily life multiple times.  The steroid I take to avoid rejection of the kidney causes mood swings which took a couple of years to learn how to reasonably control. During this time of dealing with and getting used to these issues, I didn’t always have the support system I did during the surgeries themselves. Friends and co-workers often seemed  to get impatient with me because it was no longer simple to understand what was going on, and I was reluctant to talk to people about embarrassing  physical issues. Others didn't want to listen, because the idea that I was still having so many physical problems detracted from the inspirational narrative to which they'd grown so attached. It caused  me to withdraw from people in general, and that’s largely still where things stand. I’m nowhere near as social as I used to be, and I probably never will be.

Aside from family, the things I could rely on were God, and these programs, and I truly and deeply believe those things to be connected.  Medicare and Medicaid were God working through temporal means to look after me, and all His children who needed them. Did they make me “dependent”? No, they made me grateful. It gave me an increased ability to value every second of life, to find joy in any moment when I feel physically able to do things for myself, to value being able to work. It made me determined to share my blessings with others. It made me want to work so hard that numerous people have expressed concern and asked me to slow down for the sake of my own health and well-being. I can honestly say Medicare and Medicaid have drawn me closer to the Savior than I have been at any time in my life, even on my mission. I’ve felt Heavenly Father’s love in a very personal and practical way, and I’ve been compelled to devote a large part of my life to sharing that.

As I continued to struggle, for quite some time Medicare and Medicaid were the only way I could keep getting the medicines I needed to keep my kidney and to keep seeing the parade of different doctors I had to see to deal with these issues. No one has been able to suggest to me any other options which even they think could have gotten me through these long term challenges other than Medicare and Medicaid. And as painful and traumatic as thee thing have been and continue to be, the biggest pain and trauma has come from the cruel lack of empathy for those of us who need this sort of help. The truth is, those of us who get this sort of help aren’t lazy and content, we’re in pain, both because of our own limitations, and because e of the hatred and resentment which is often directed at us. I’ve had to listen to a lot of people, including friends, colleagues, and people I went to church with, say unkind and even vicious things about people who received help with healthcare through government programs. It’s very rare that anyone intentionally directs these sorts of comments toward  me. Most of the time they either aren’t aware that I’ve benefitted from these programs, or they somehow believe I was an exception, because in their minds most of the other people getting help are lazy people who refuse to work and are getting something for nothing. Even many of the people who don’t say these hurtful things support politicians who say them. Politicians who call Medicare and Medicaid wasteful, and support “repeal and replace programs”, all of which thus far proposed would bring back insurance companies having the ability to deny “pre-existing conditions” (in some cases there would be an exception for those who’d  had “continuous coverage”, which would not have included me), or who now advocate “phasing out” Medicare. Under any of these ideas, I wouldn’t have been able to get the surgeries I needed. And because I wouldn’t even have been able to work enough to pay for dialysis, I wouldn’t have survived. Every time I hear people saying these things, what I hear is "Paul shouldn't be alive." And I think if you really examine the facts and inherent logic of the matter, you'll see that's quite a reasonable meaning to take from them.

But Medicare and Medicaid exist, and because of them, I did survive. I survived to fight past the physical pain and limitations and go back to working. I survived to go on and serve in the Church. I survived to meet the love of my life and marry her in the temple. I’ve survived to keep being an uncle to those wonderful children and their stepbrother, and  the new sister they’ll meet soon, whose life I’m blessed to be able to share in because I’m  still alive. Some who share my religious belief would argue that I survived because of blessings from Heavenly Father, not because of Medicaid and Medicare, but I believe they’re making a serious error in not recognizing that these programs are the tool through which Heavenly Father blessed me. Without Medicare and Medicaid, I would have left this world at an early age.  Because of them, I’m still here. For that I thank Heavenly Father, and those He inspired to create and protect these programs. And I pray that the programs will be allowed to continue to save lives.